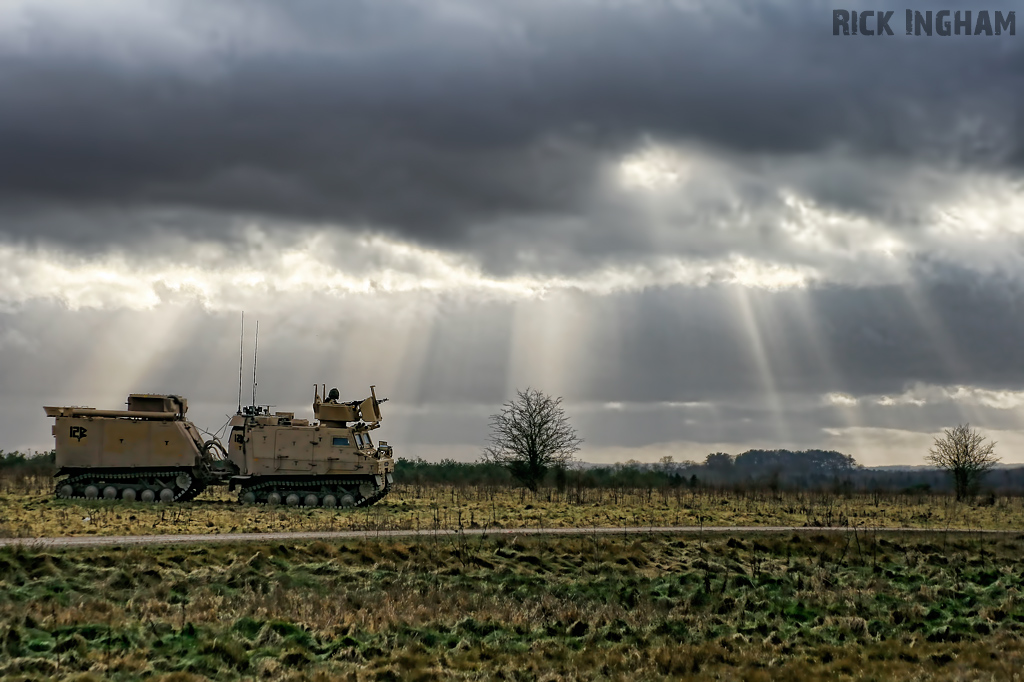 Pashtun Dagger (named after the Royal Marine's Dagger symbol) provided several scenarios that the 6000 soldiers might come across in Afghanistan during their imminent deployment. This includes searching for IED's (Improvised Explosive Devices), using Close Air Support (CAS), securing an aircraft crash site and dealing with casualties.

A good way of combining these situations is to have a convoy traveling a route across Salisbury Plain. This brings in the need to search for IED's, CAS and inevitably dealing with any casualties. Pashtun Jaguar is also required to provide support for the convoys with Apache gunship helicopters and Gazelle and Lynx aircraft fitted with surveillance cameras. 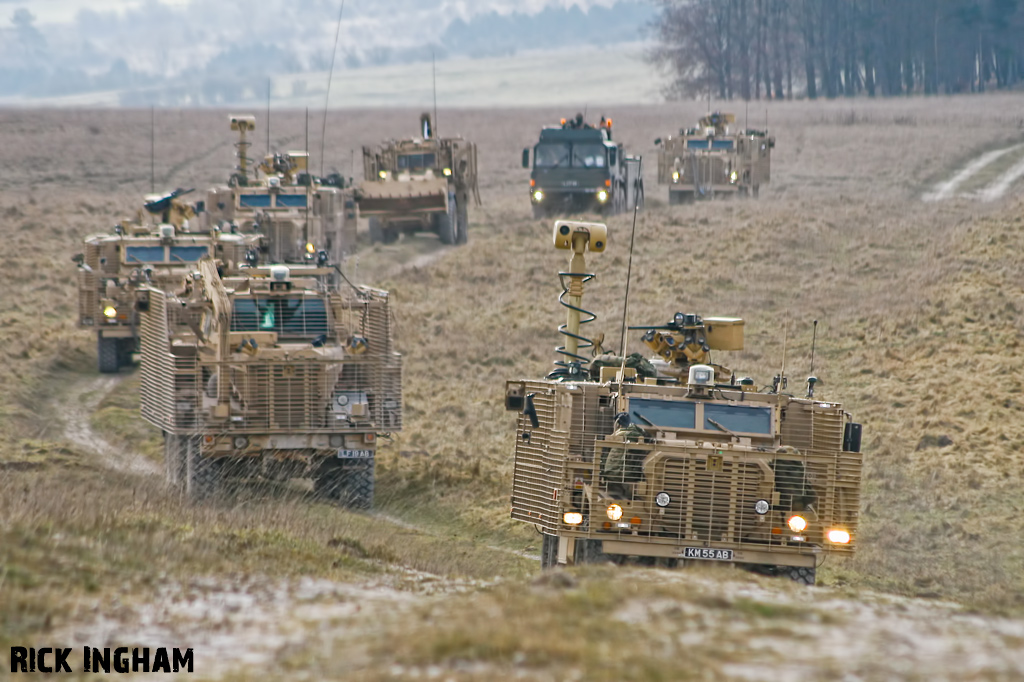 Exercise Pashtun Jaguar supports the main FTX consisting of around 16 rotary aircraft including:

This is backed up with fixed wing assets including:

The rotary aircraft were based at Netheravon airfield for the duration of the exercise. The helicopters were split into three groups.
SHF (Support Helicopter Force) - On standby with MERT (Medical, Emergency Response Team) and QRF (Quick Reaction Force)
ISTAR and Surveillance- flies above the battlefield providing intelligence to ground units.
Air Support - Apache gunships assist ground units and also escort SHF. 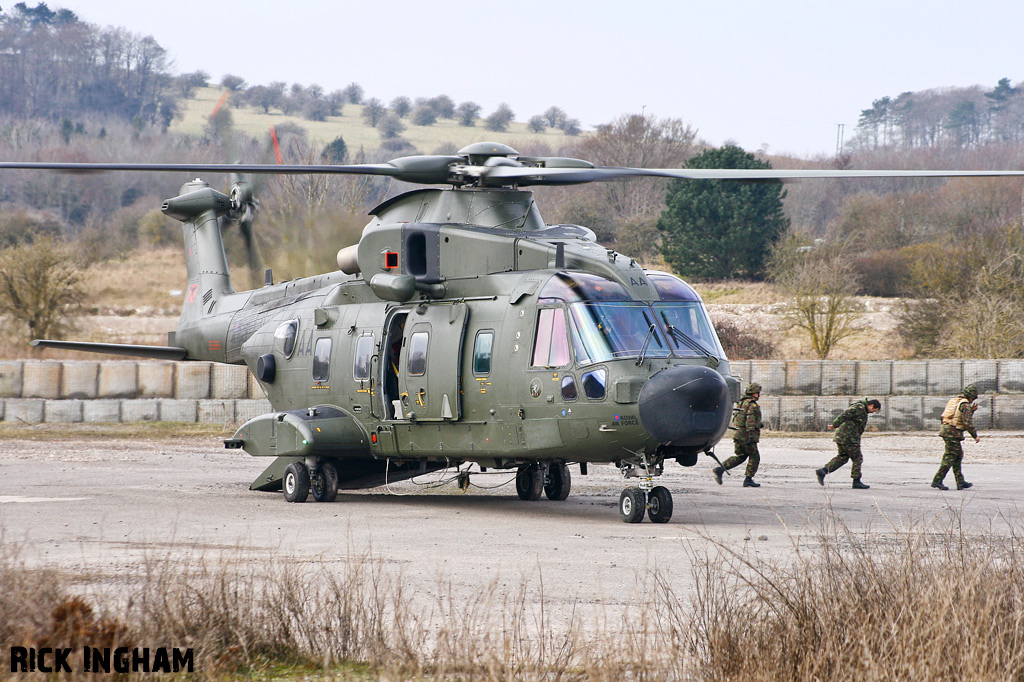 The MERT (Medical, Emergency Response Team) is a team of medics that can be scrambled within 9 minutes to assist any casualty across Afghanistan, whether he/she is UK or coalition. The MERTs are based at the Field Hospital in Camp Bastion. When a MERT is scrambled the Chinook pilots shorten their pre-flight checks from 30 minutes to 6 minutes. All medical equipment is already set up in the Chinook ready for the call so the medical team can jumpy straight into the aircraft followed by the QRF. Apache helicopters fly ahead to clear the area and help secure the HLS (helicopter landing site). Once clear the Chinook makes a very quick landing which is followed by the QRF running out the rear ramp and providing cover for the aircraft and MERT who get the casualty.
The aircraft then takes off whilst being covered by it's Apache escorts and flies as fast as possible direct to Bastion field hospital. 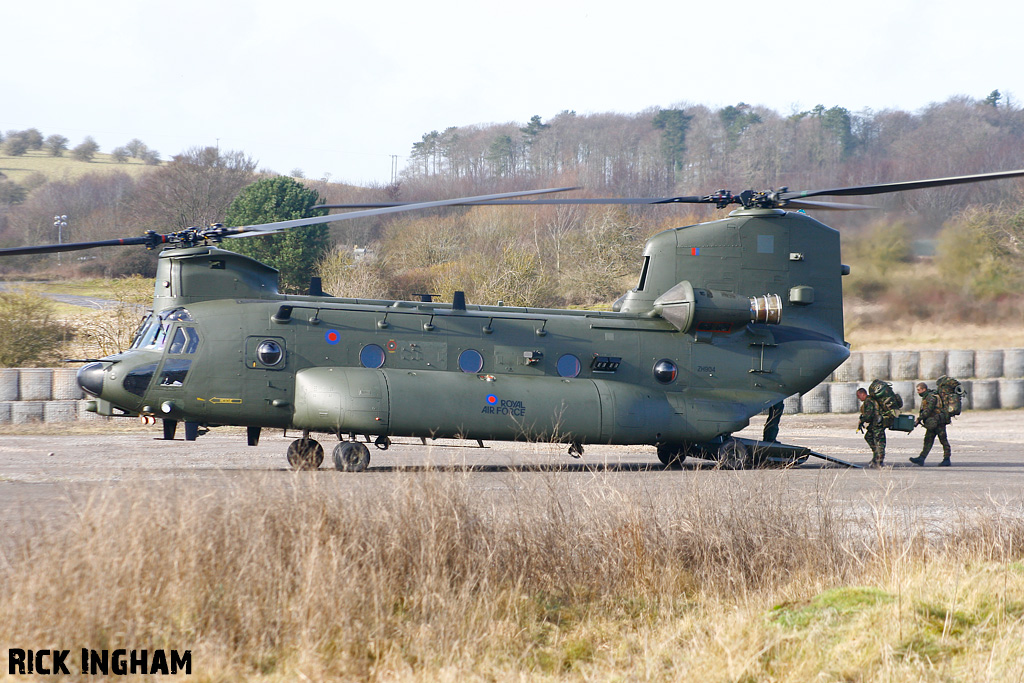 The QRF (Quick Reaction Force) used a Merlin on the exercise (callsign Moulton 40) to deploy quickly to the locations they are needed.
The QRF are on standby 24/7 and need only 15 minutes notice to set off on their tasking. Their primary objective is security, whether that be to secure a crash site, rescue a hostage or collect detainees.
The size of the force depends on the mission and can feature Special Forces and soldiers drawn from all three services.
QRF teams also fly with MERTs to secure the area when the Chinook first lands. 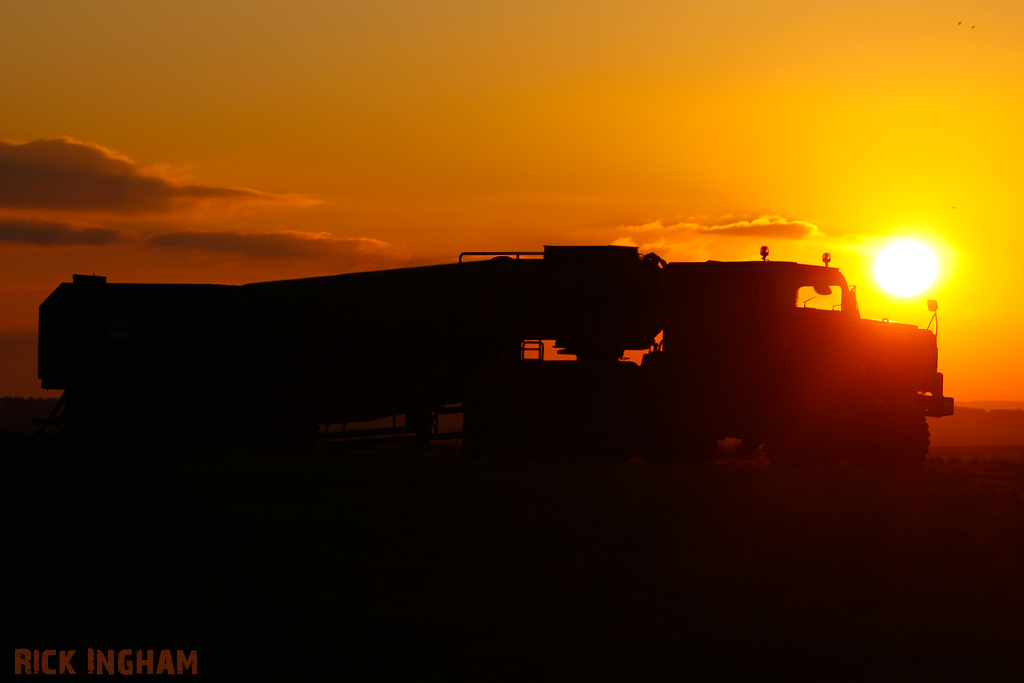 The FRP (Forward Refueling Point) during the FTX was provided as usual by TSW (Tactical Supply Wing) - When deployed this becomes a FARP (Forward Arming and Refueling Point). Once the aircraft has finished it's mission it flies in to the FRP to refuel so it is already ready for the next tasking. The TSW provide RTR (Rotors Turning Refuel) so the aircraft doesn't have to shut down. The Gazelle however, must always shut down as the fuel access is too close to the rotors and would lead to fuel being sucked into the engine. 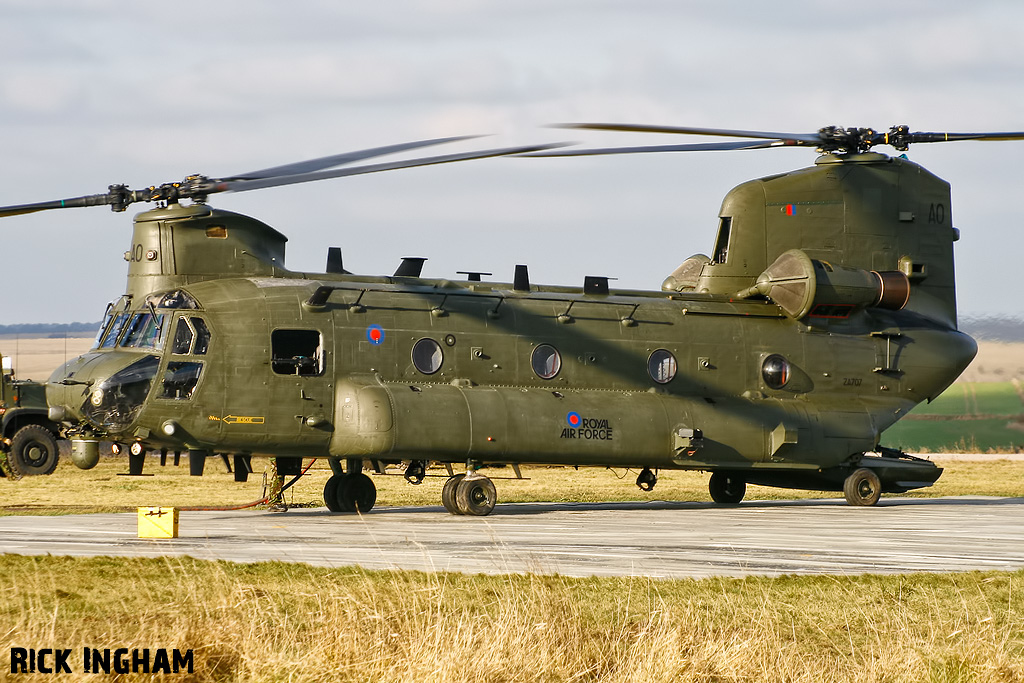 TSW provide landing mats for the helicopters to land on and use Oshkosh refuellers to store the fuel. The FRP can quickly be relocated at a moments notice. During Pashtun Dagger/Jaguar the FRP was moved to Chivenor for one day to practice this. The TSW use various hand signals so that the refuel is as safe as possible. In the event of a leak there is someone ready to shut the fuel off and another to give the signal. 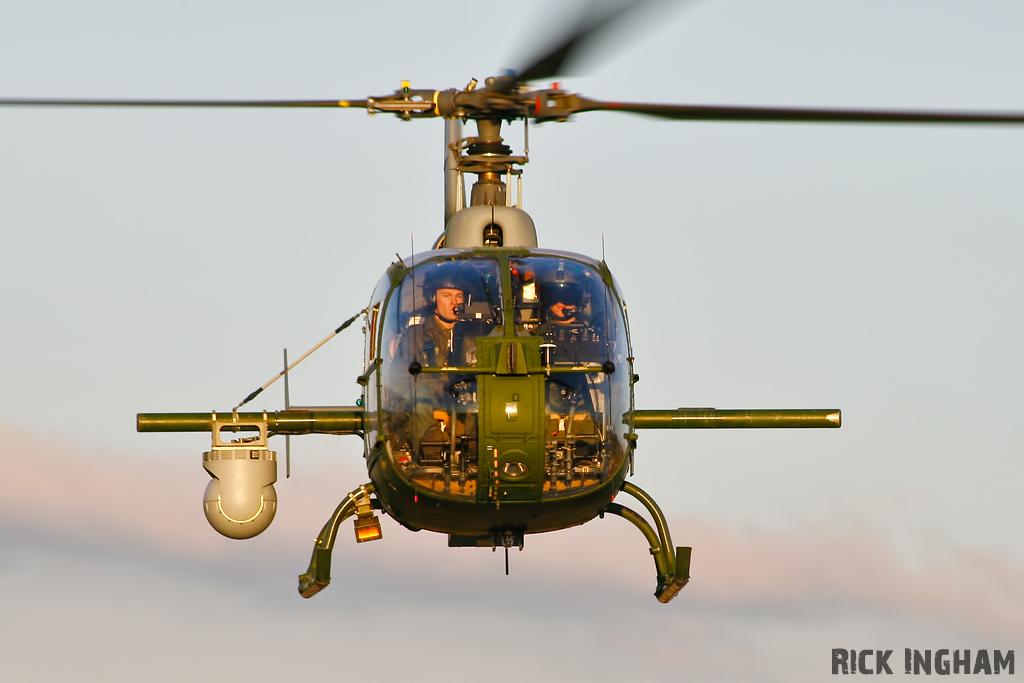 ISTAR ( Intelligence, Surveillance, Target Acquisition, and Reconnaissance) has become an important element in operations in Afghanistan. ISTAR provides 'an eye in the sky' which collects information and instantly sends it to those who need it. Primarily ISTAR can provide those in charge of operations an overall picture of the battlefield which can help them plan their next step. The aircraft fitted with ISTAR can also assist in counter-IED's scanning ahead of convoys for devices set.

During Pashtun Dagger, a Gazelle and Lynx AH7 fitted with MX-15 ISTAR Cameras act as UAVs (Unmanned Ariel Vehicle) which are used in Afghanistan. RAF Sentinel aircraft and the Islander G-MAFF from Bournemouth Airport also assisted with this role. 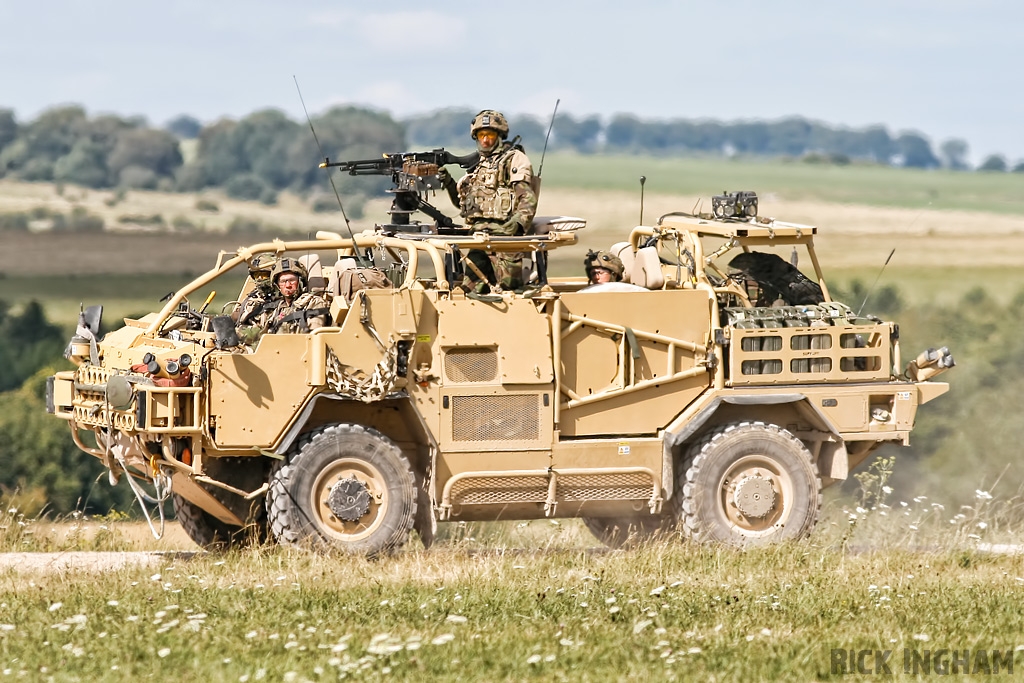 The Jackal is officially named MWMI (Mobility Weapon-Mounted Installation Kit) and is the original of a family of vehicles by Supacat Ltd.
The Jackal is an all terrain reconnaissance, rapid assault and fire support vehicle and is also used for convoy protection. 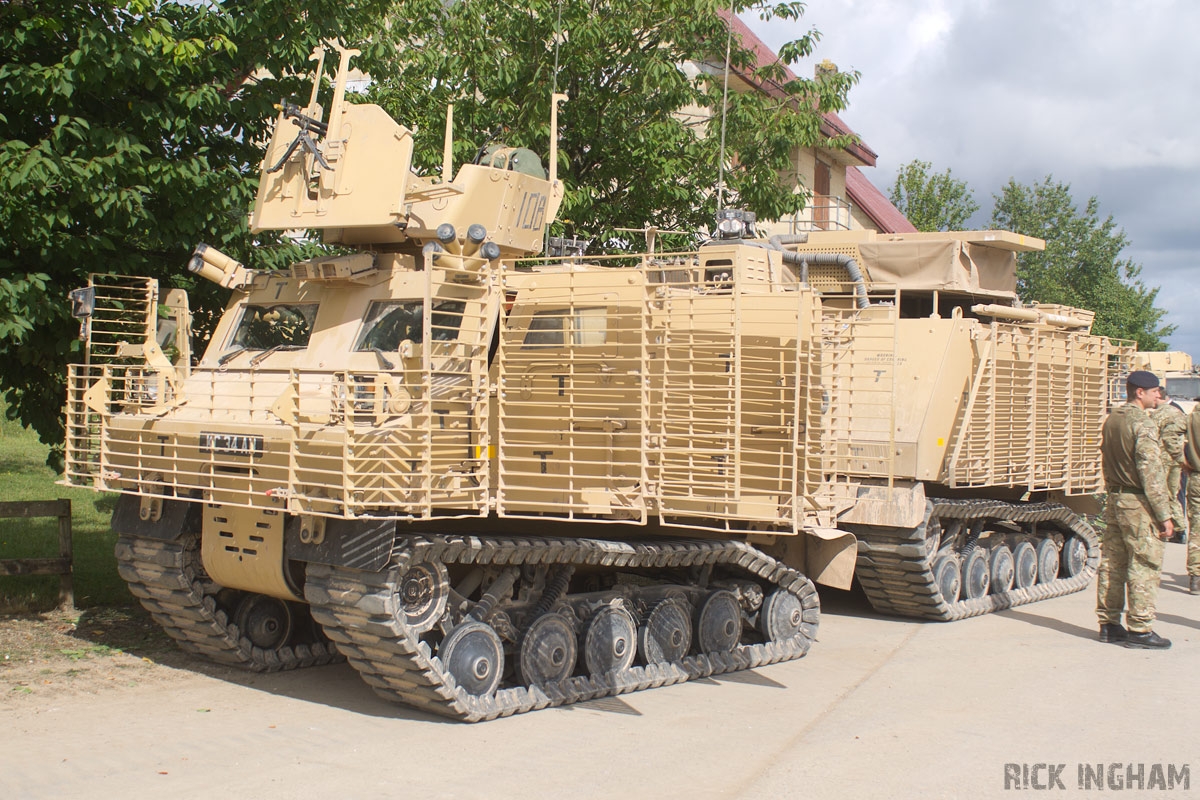 At the time of writing (Feb 2011), the Warthog is the newest vehicle in the British Army. It's an all terrain protected mobility vehicle, capable of transporting troops over virtually any surface - perfect for Afghanistan.
The Warthog is fitted with Bowman communications, mine blast protection and electronic counter-measures (ECM).
Warthog comes fitted with either a 7.62mm General Purpose Machine Gun (GPMG) or 0.5 Calibre Heavy Machine Gun (HMG) which provides suppressive fire to 1000 metres. 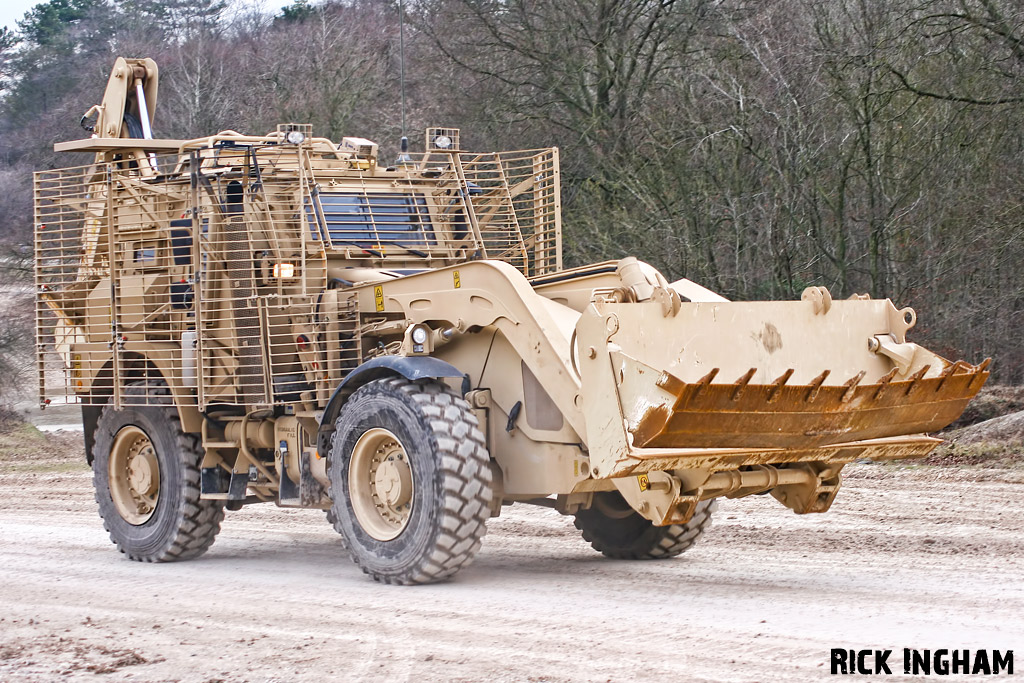 The HMEE was originally developed for the US Army but in 2009 the UK awarded JCB the contract for the 4X4 wheel drive, 200HP engined Backhoe loader. The HMEE is used to clear routes in advance of soldiers being deployed to a specific region and comes fitted with the protective armour. 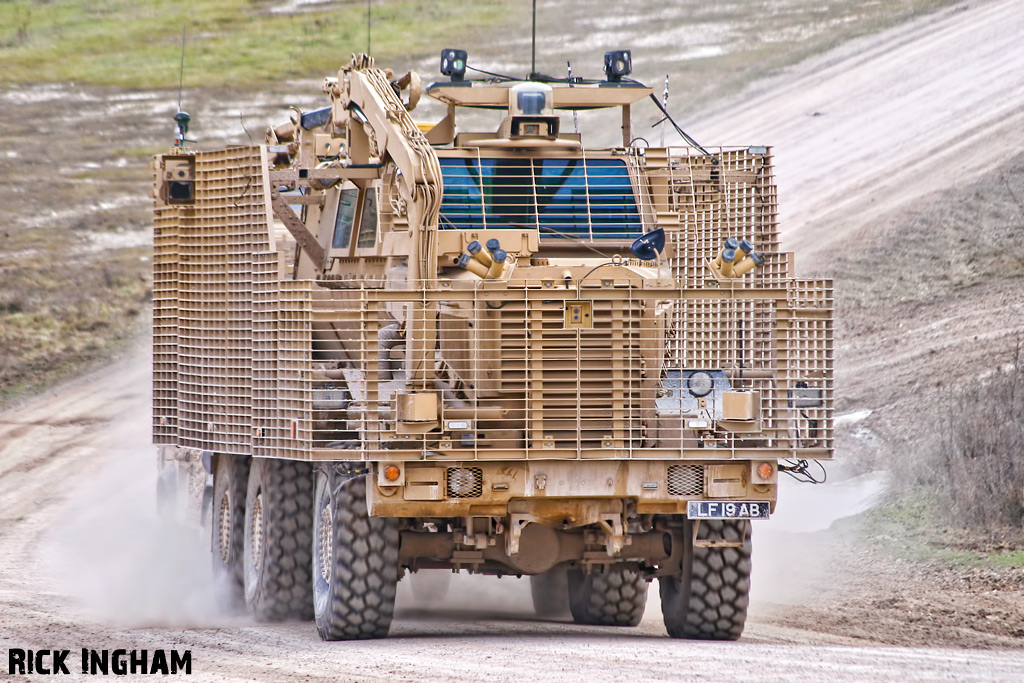 The Buffalo is a 6X6 vehicle designed for IED mine clearance, asset protection, command and control and protects it's occupants against mine attacks. The Buffalo also features the UOR cage to help protect against explosives. 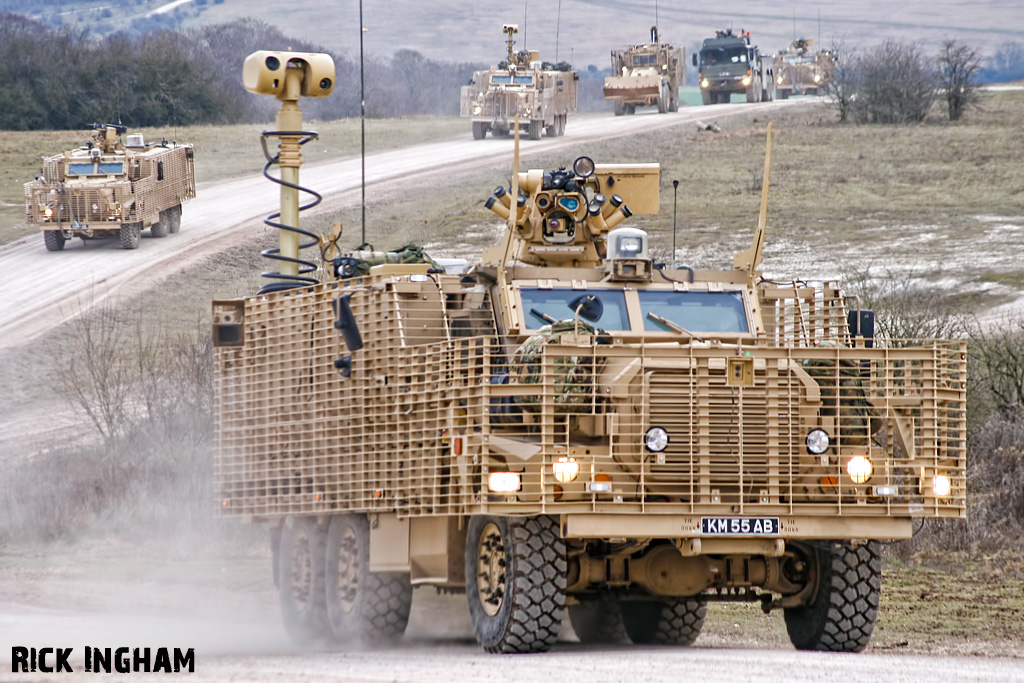 Mastiff 2 PE (Protected Eyes) - Logistics
"Protected Eyes" is a new variant of the Mastiff which is part of the Talisman system. The Talisman suite is the latest weapon to help counter the threat posed by Improvised Explosive Devices (IED's) and mines. The PE supports the Buffalo and HMEE to help clear IED's and mines. 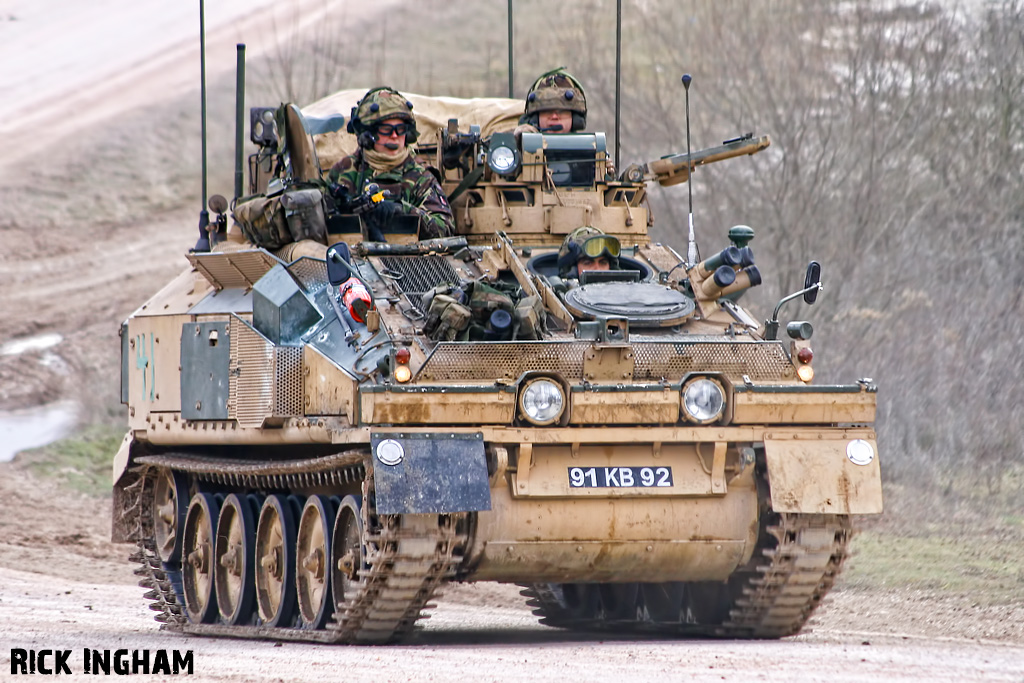 Spartan CVR(T) - Reconnaissance
The Combat Vehicle Reconnaissance (Tracked) (CVR(T)) is a family of vehicles based on the same 8 tonne body. The Spartan (pictured) is an armored personnel carrier, the Scimitar features a 30mm Rarden cannon, Samaritan is the medical version, Samson is the REME variant and has a crane connected to the back and finally the Sultan is a command and control variant with different pieces of communications equipment. 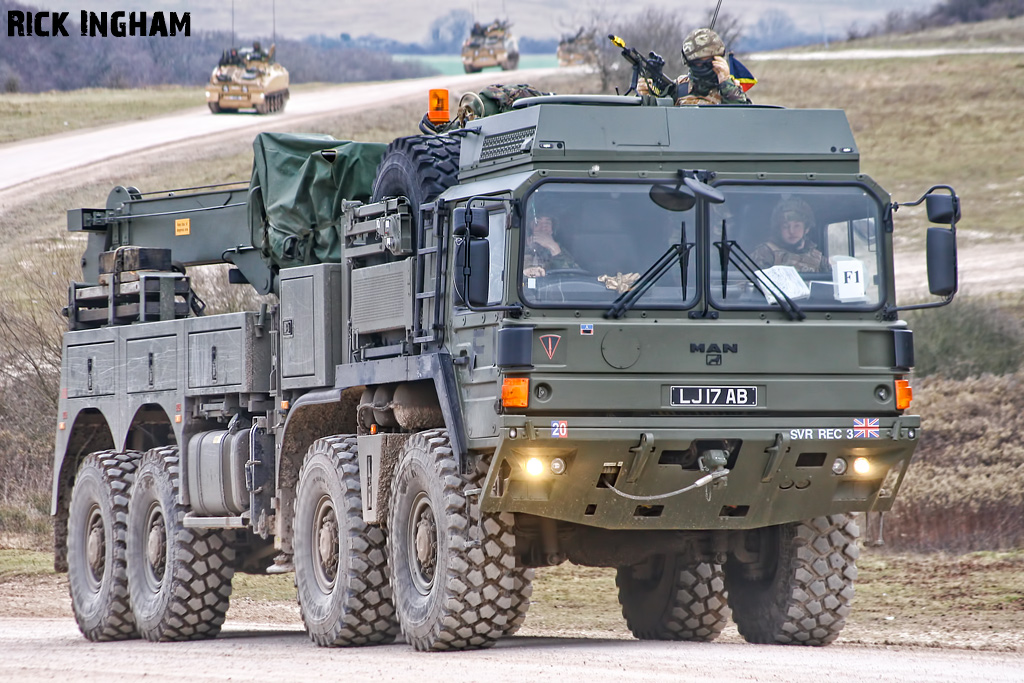 This recovery version of the 32 ton MAN truck is an 8X8 wheel drive and capable of towing any vehicle in the British Army. The MAN RV can lift up to 15 tons and and tow a 44 ton vehicle. It comes with it's own lifting crane and Winch. 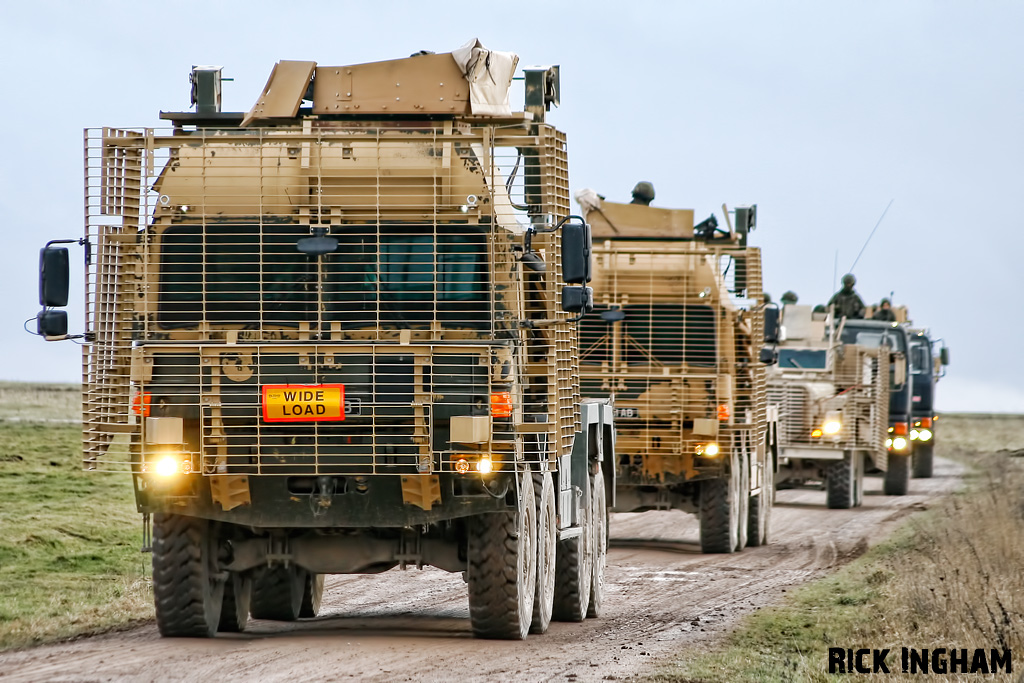 Another version of the new MAN truck. The CV variant can often be seen in convoys as it's currently the primary logistics vehicle. The image to the left shows the UOR version which features a cage to protect the occupants. In theory, an explosive will hit the cage and explode before reaching the vehicle. This has been applied to many vehicles used in Afghanistan. 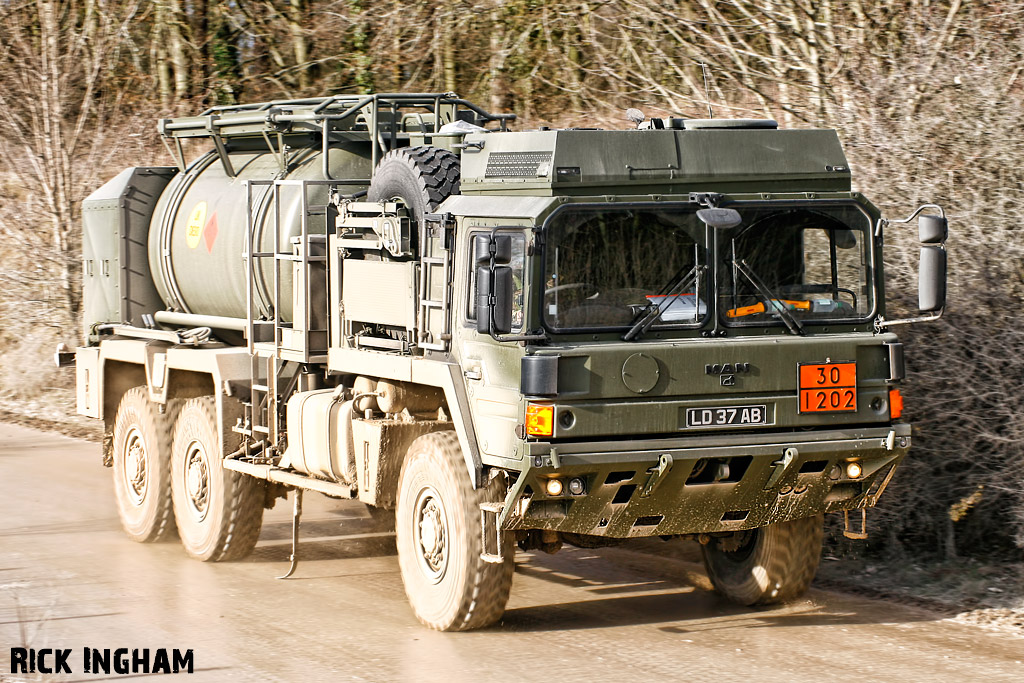 Yet another variant of the MAN. The UST is simply a refueller for ground vehicles and can quite often be seen in convoys to keep the vehicles moving... 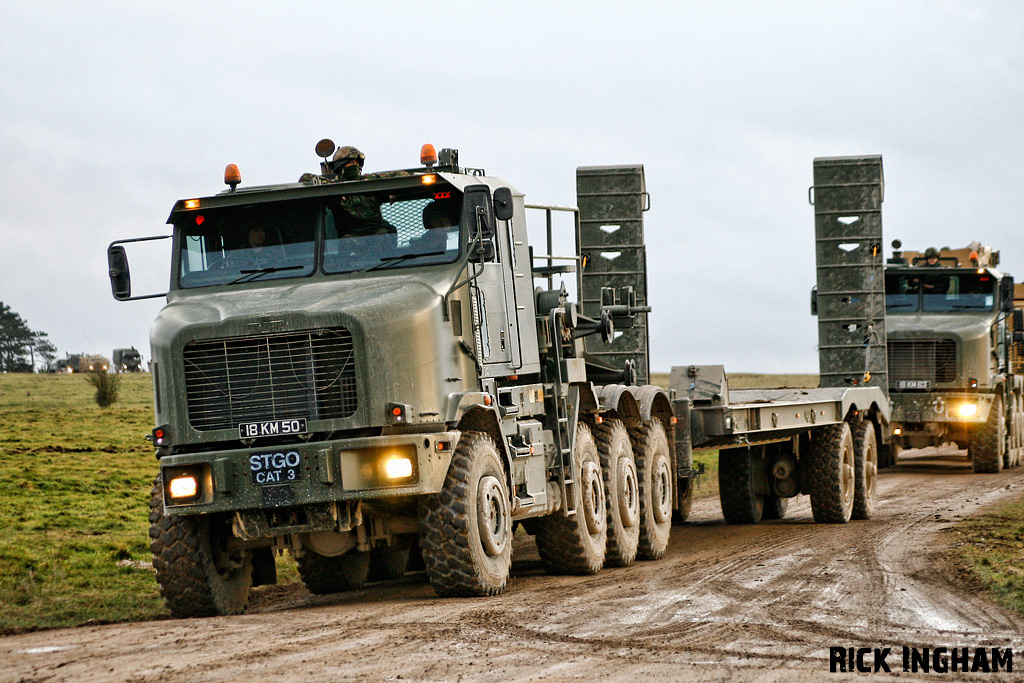 The Oshkosh originates from America and is capable of carrying 70 tonnes. The HET is the most powerful transporter in the British Army which is an 8X8 wheel drive and powered by an after-cooled Caterpillar C18 turbocharged diesel engine which develops 700bhp

A side feature of this winter's FTX was it's public relations.
Apart from the two Media days (one for Pashtun Dagger at Copehill FIBUA village and the other for Pashtun Jaguar at Netheravon), there were also two Royal visits.
The Duke of York visited one of the many FOBs (Forward Operating Bases) where luckily I was standing at the time. (Image right)
Prince Charles also visited The 3rd Battalion The Mercian Regiment who are taking part in the exercise having come from their base in Germany. 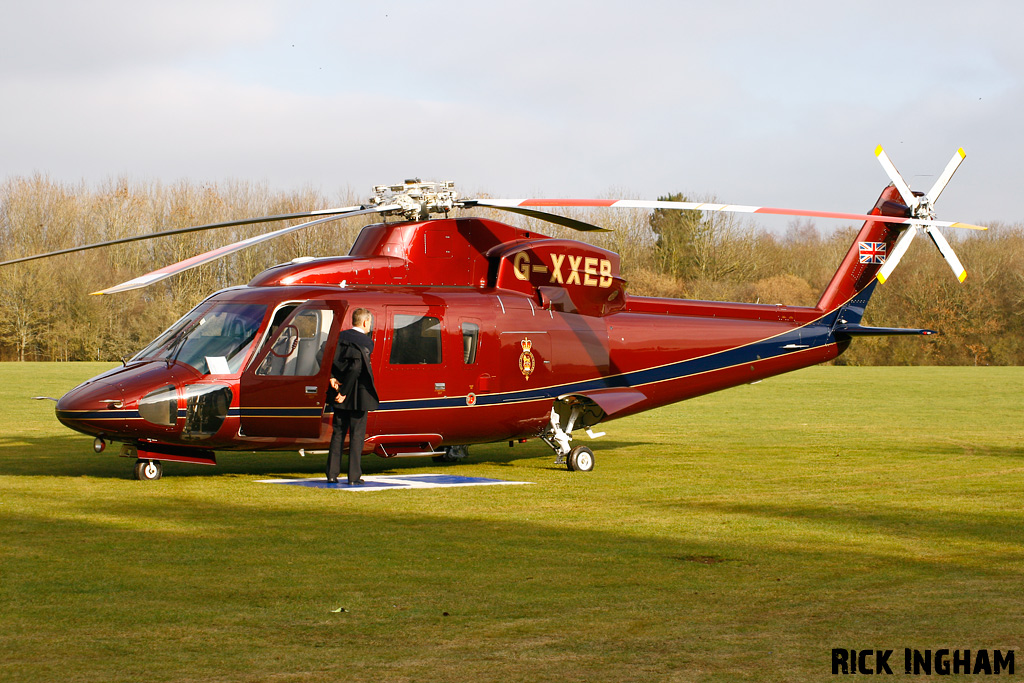 Above is G-XXEB, a Sikorsky S-76 helicopter owned by the Royal family is based at Blackbushe airfield and is one of two aircraft in the 'Royal Flight'.