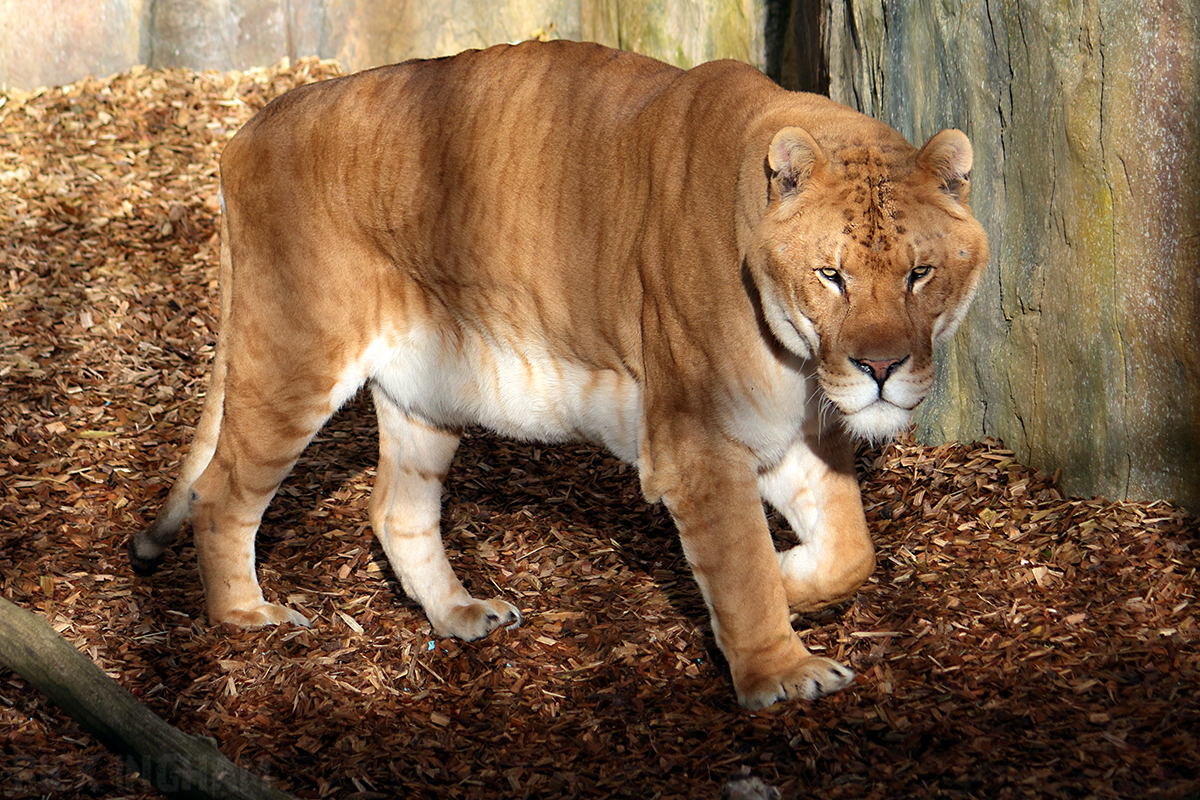 Photographing a Liger has always been top of my bucket list! With a lot of luck, I managed to obtain access to two privately kept Ligers just 1 hour from home, giving me a great opportunity to learn about these stunning rarities… 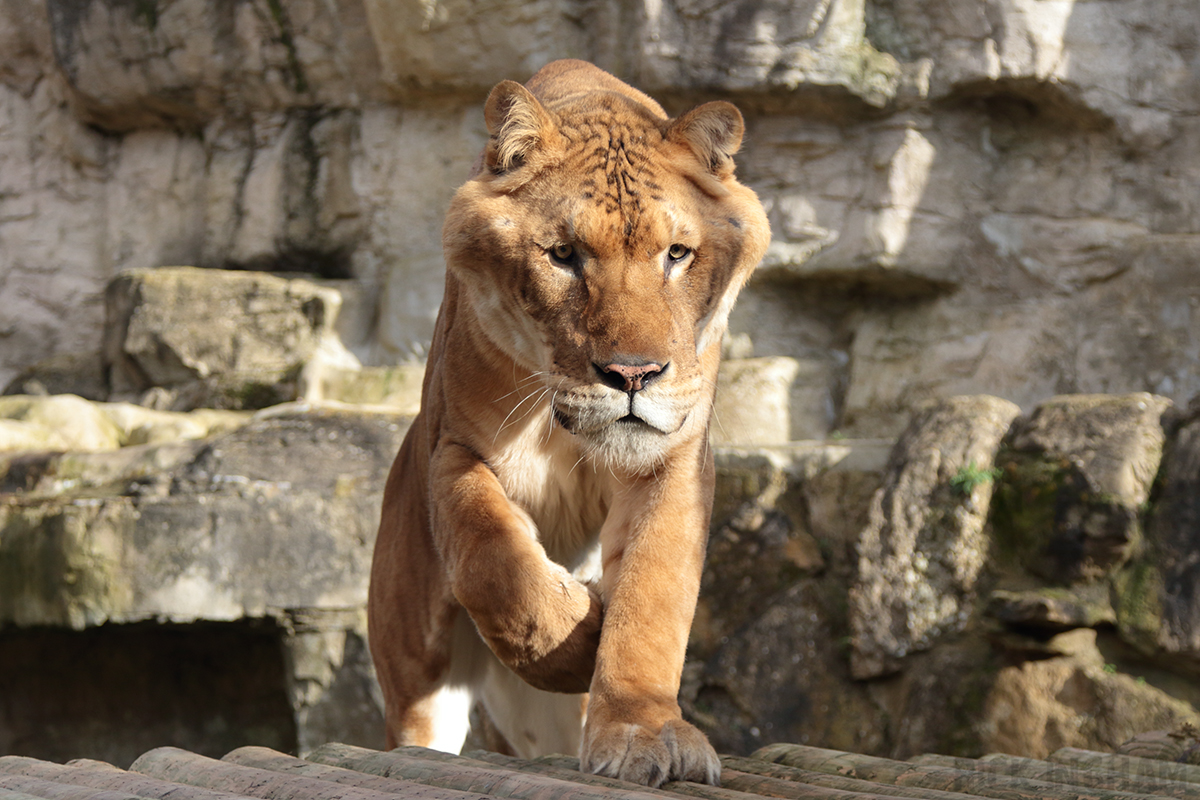 Due to there being so few Ligers in the world, it’s difficult to pin point their exact characteristics. However, the average Liger weighs around 400kg, double the weight of a male Lion at 190kg and still heavier than a male Tiger at 300kg.
They can grow to 5 feet tall and 11 feet long making them the world’s biggest cat and the world’s biggest carnivore, once again leaving the Lions behind with a typical male Lion just under 4 feet tall and 8 feet long.
Due to the size of Ligers, conventional birth is usually not possible and a C-Section is required. Whilst growing up, they put on 500 grams in weight per day and at just 60 days old can weigh over 7kg compared to a tiger which would weigh only 4kg.
At the age of 6 years old they will be fully grown, however Ligers are prone to obesity and can eat up to 45kg’s in meat in one go if not controlled so keepers tend to limit food to around 11kg per day. 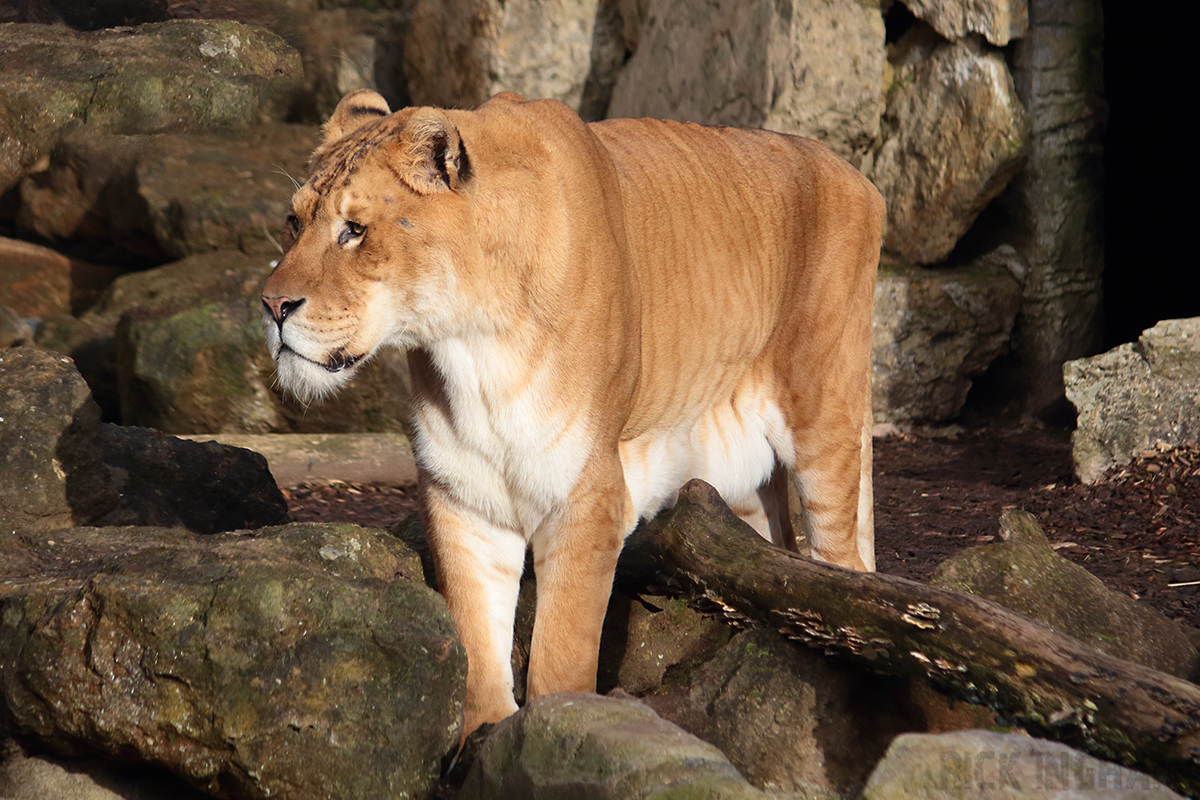 A Liger usually has the bone structure similar to a Lion with faint tiger stripes. Male Ligers can sometimes grow a small mane, however the two I have photographed here haven’t. The biggest Tiger like feature they have other than the stripes is the tail, which is very similar. They do roar like Lions but can also chuff like Tigers. 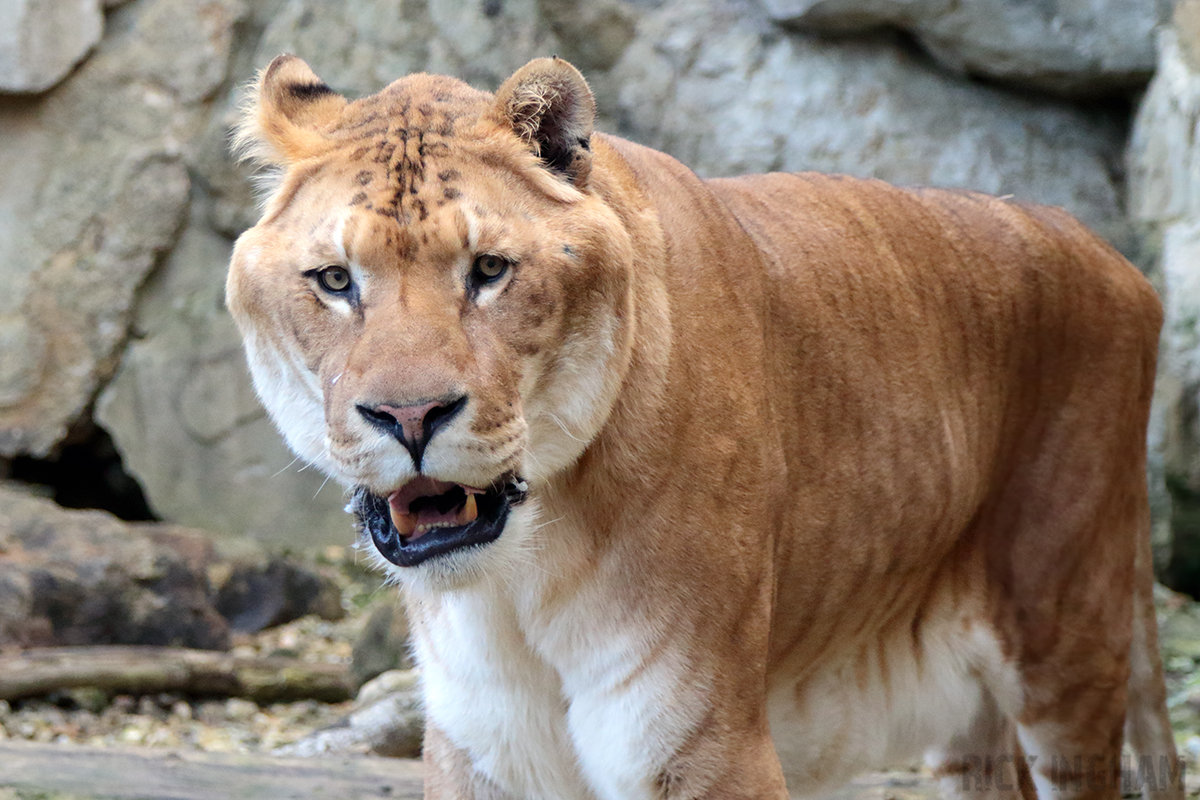 It’s their personalities that really fascinate me though. Ligers are very social, much like Lions and would favour living in a pride though would prefer the habitat of the Tiger and near a nice river. They love being around water and are superb swimmers, owing to their massive paws, the size of my face! The owners of these two cats, are shortly creating a big pool for them in their enclosure.
With Ligers taking so many characteristics from their parents you would expect them to inherit the territorial and aggressive instincts however they are extremely docile and very calm cats and remain so their whole lives. 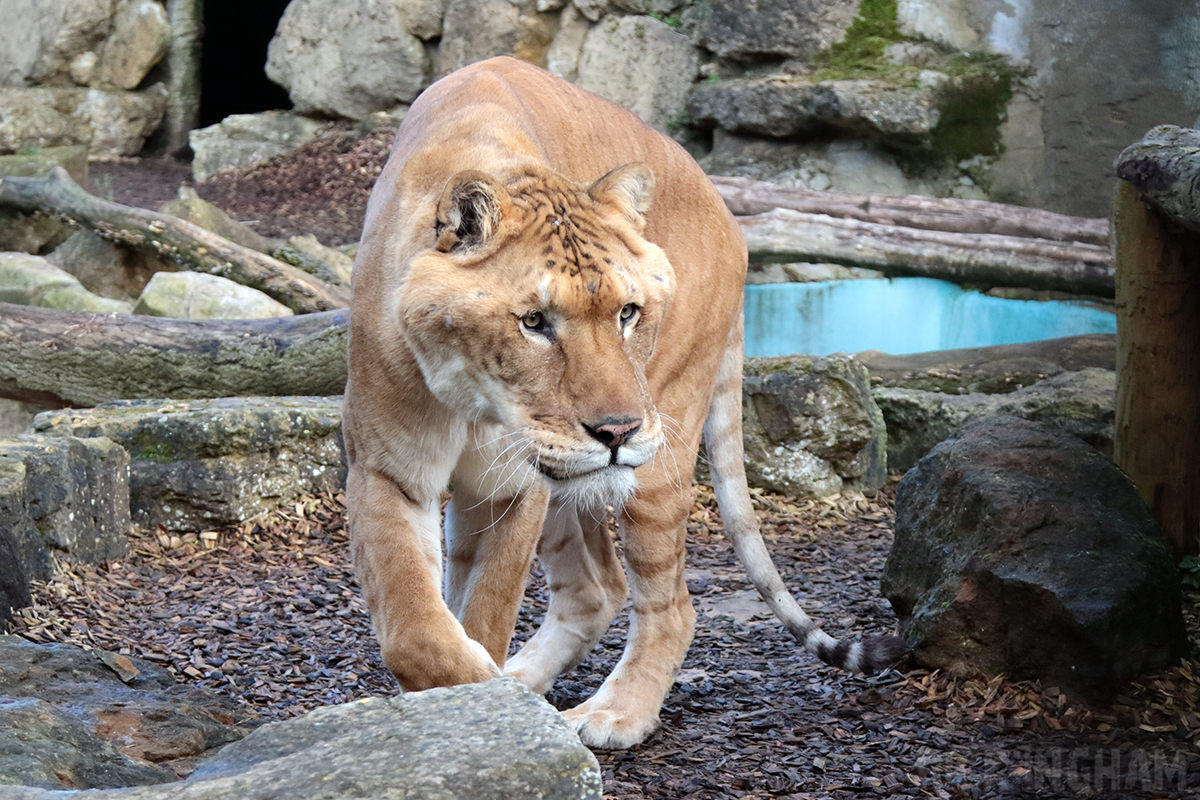 Ligers in the Wild

Ligers are the cause of accidental mating in captivity making them technically not a wild animal. A small portion of India once had a Tiger and Lion population however due to habitat loss this is now thought to be history. Even so, due to a C-Section being the only successful way to give birth to such a big cat, there more than likely would never have been Ligers in the wild. Reports hundreds of years ago of a Sabre Tooth Tiger looking cat in the area does make you wonder whether it may have happened…In theory it could well have. The Liger does seem to be a ‘super’ cat taking the benefits from both Lion and Tiger so could have been a superior hunter, quick through the water and big enough to scare other animals away from any kill.
It’s size though would mean Ligers would need to hunt bigger animals and more often and being heavier would tire quicker. I guess we will never know! 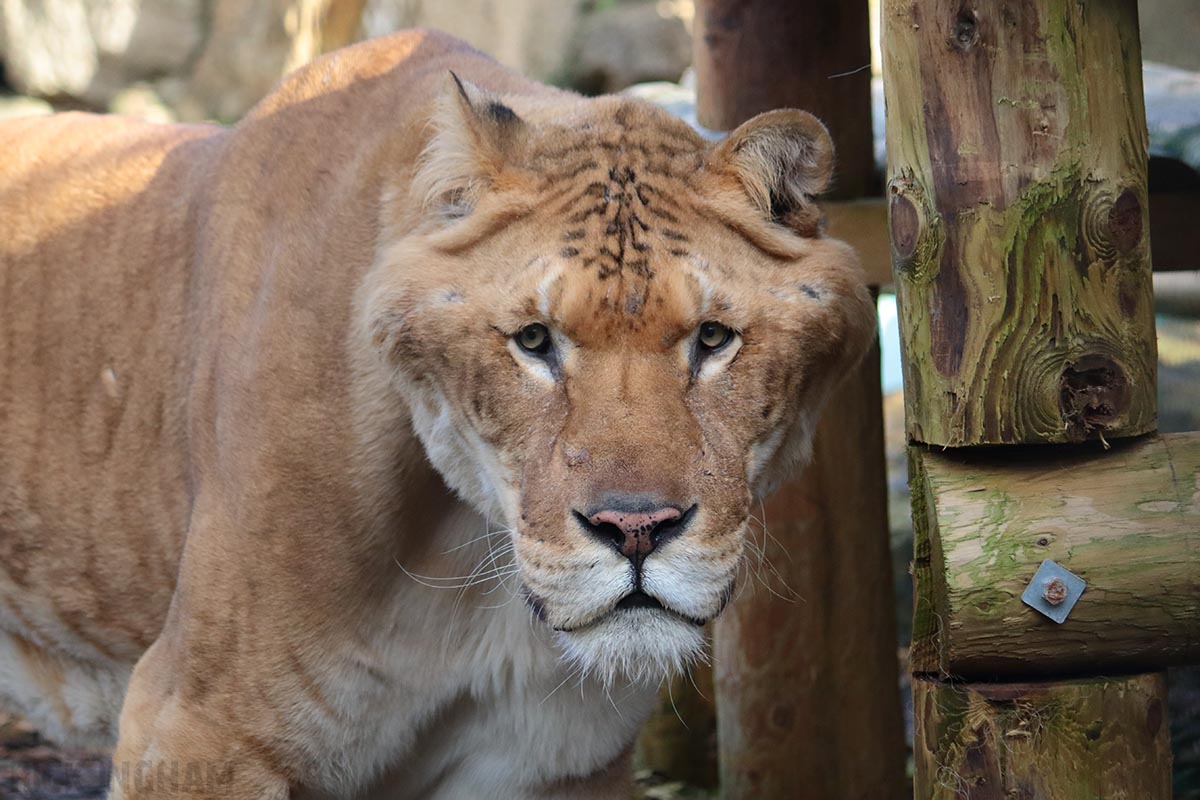 Many hybrid animals are sterile and Ligers are no exception. There has never been a pure Liger offspring from 2 other Ligers and this would be perhaps the primary reason we don’t see Ligers in the wild.
In all the Liger or Tigon combinations, the females are always the hybrids and there has never been a Liger or Tygon father proving hybrid Males are sterile.
Because the cubs feature more of the Males characteristics with it’s genes being 75% of the Male’s, this means only 25% is the Liger gene so will carry over, which means we will never see more and more Liger traits through cubs. It feels like nature’s way of ensuring it doesn’t get out of hand! 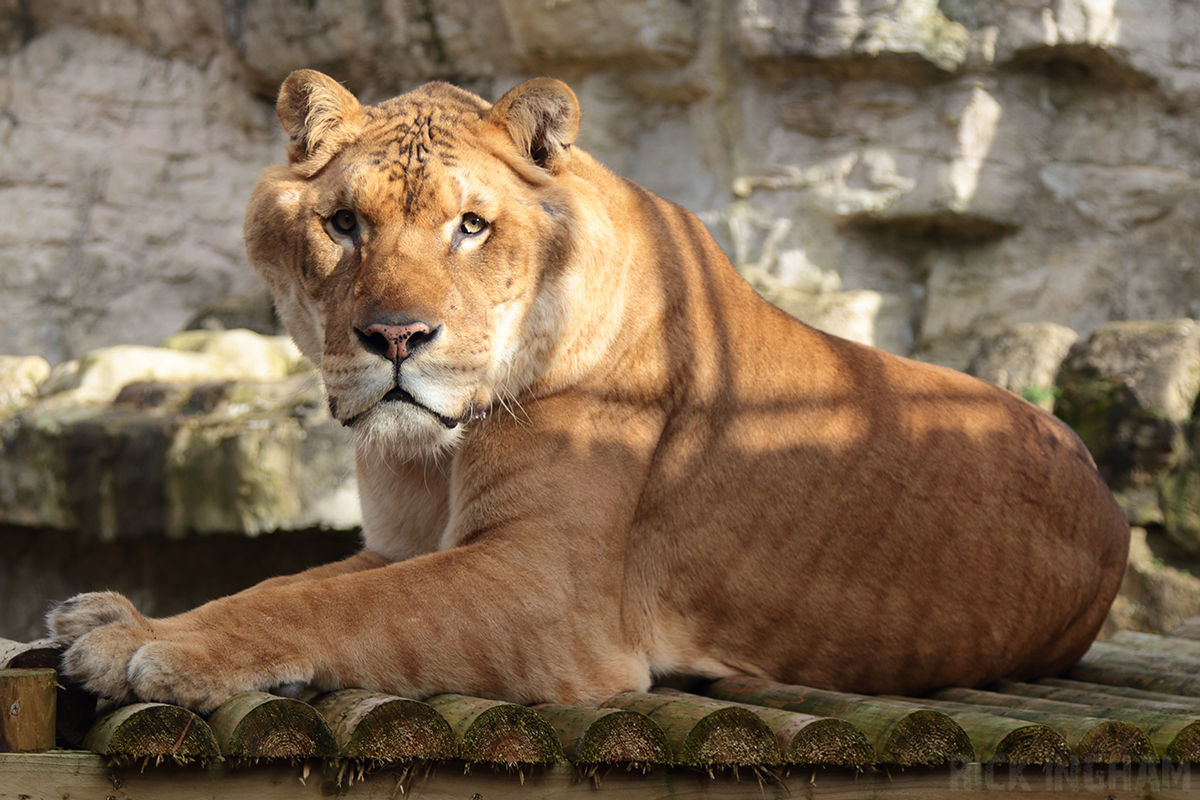 This does however lead on to many other weird and wonderful hybrid cat names…
A Lion/Tigon offspring would be a Litigon and a Tiger and a Liger would result in a Tiliger. There are many other cat hybrids such as Titigon, Jagulep, Lijagulep, Tigard, Pumapard, Leopon, Liard, Caraval, Servical etc…All very fun to work out!
Unlike the Tiger, Lions share common ancestors with leopards and Jaguars meaning
lions are more related to leopards and jaguars than they are to tigers.
Around 3.2 million years ago Tigers began to evolve into their own unique species, while a few million years later the Leopard and Jaguar began to split from the Lion.
This evolution means Lion, Leopard and Jaguar can all have successful hybrid cubs (Lipard/Leopon, Jagupar/Laguar and Liguar/Jaglion) but a Tiger will only be successful with a Lion. 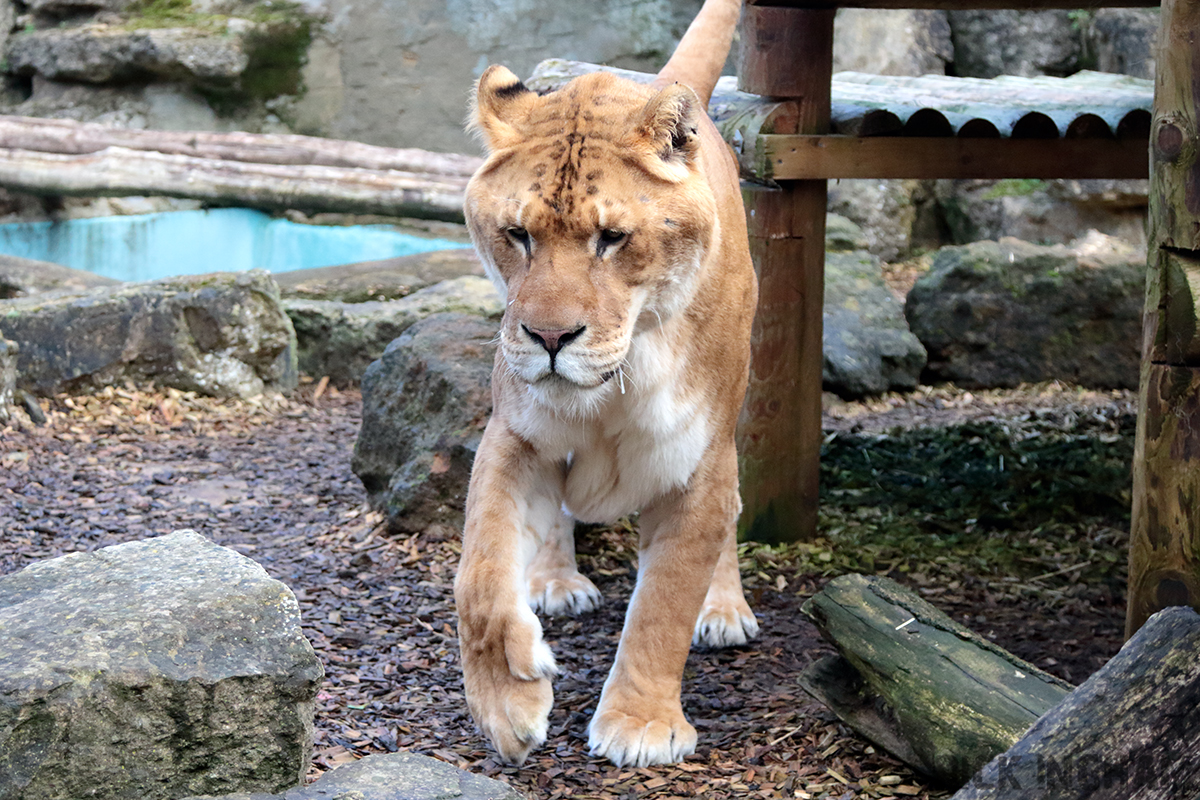 Issues
In addition to the infertility in males. mixing two different species with two different behavioural characteristics can lead to problems.
Female Ligers may experience mixed feelings wanting to be part of a pride and a sisterhood of lionesses, while also wanting isolation like a tiger desires and their intolerance towards constant company. This can lead to the cat being stressed, confused and depressed, especially especially after reaching sexual maturity.
There have been cases where a male Leoaprd and a Lioness have produced a cub and the mother has been distressed by her ‘Leopon’ cub swimming, climbing trees, and other things Lions rarely do. 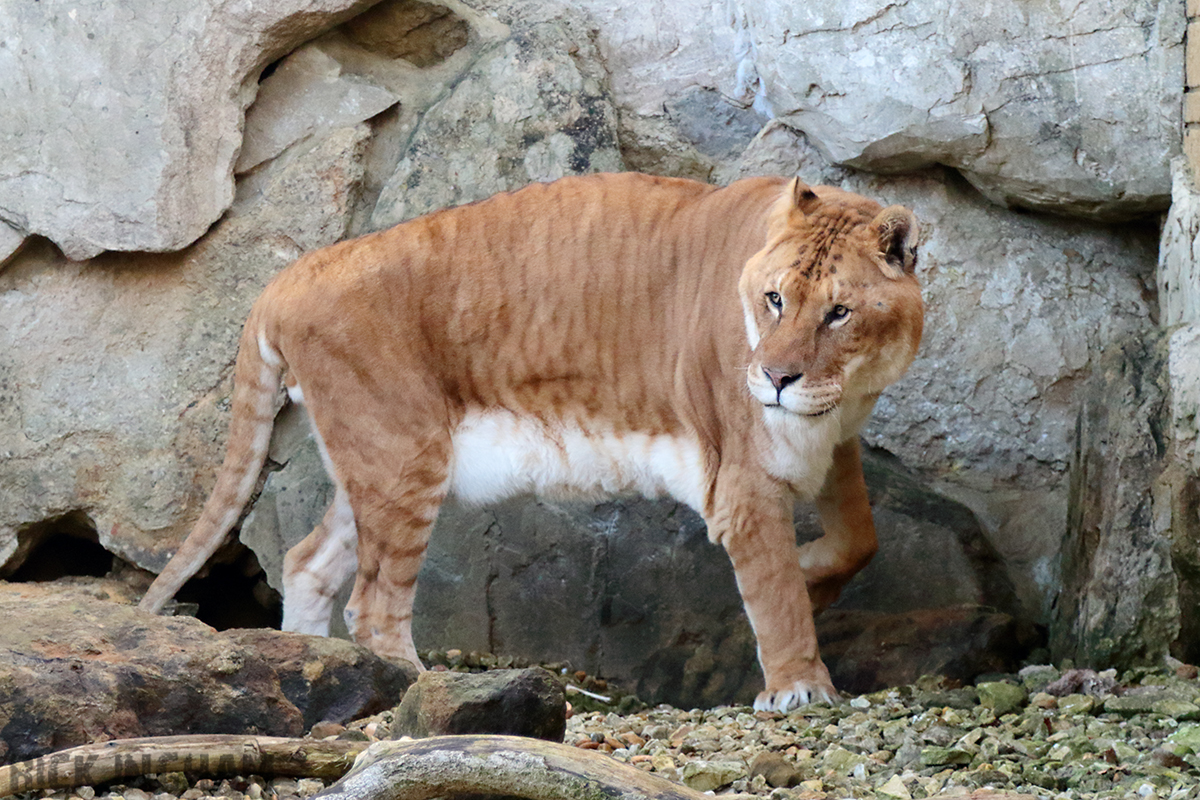 Controversy
Understandably, a lot of people have issues with Ligers and even Hybrid cats as a whole. Aswell as the behavioural and hormonal conflicts that can affect them Psychologically and the birth problems than can pose a serious threat to the mother, there is also speculation that, hybrid species can have a higher rate of birth defects. People also don’t agree with forcing two species of animals together…an act which has even been made illegal in Taiwan. However as said at the beginning there are so little Ligers around, the only way to understand them and find out more about them is to produce more Ligers. 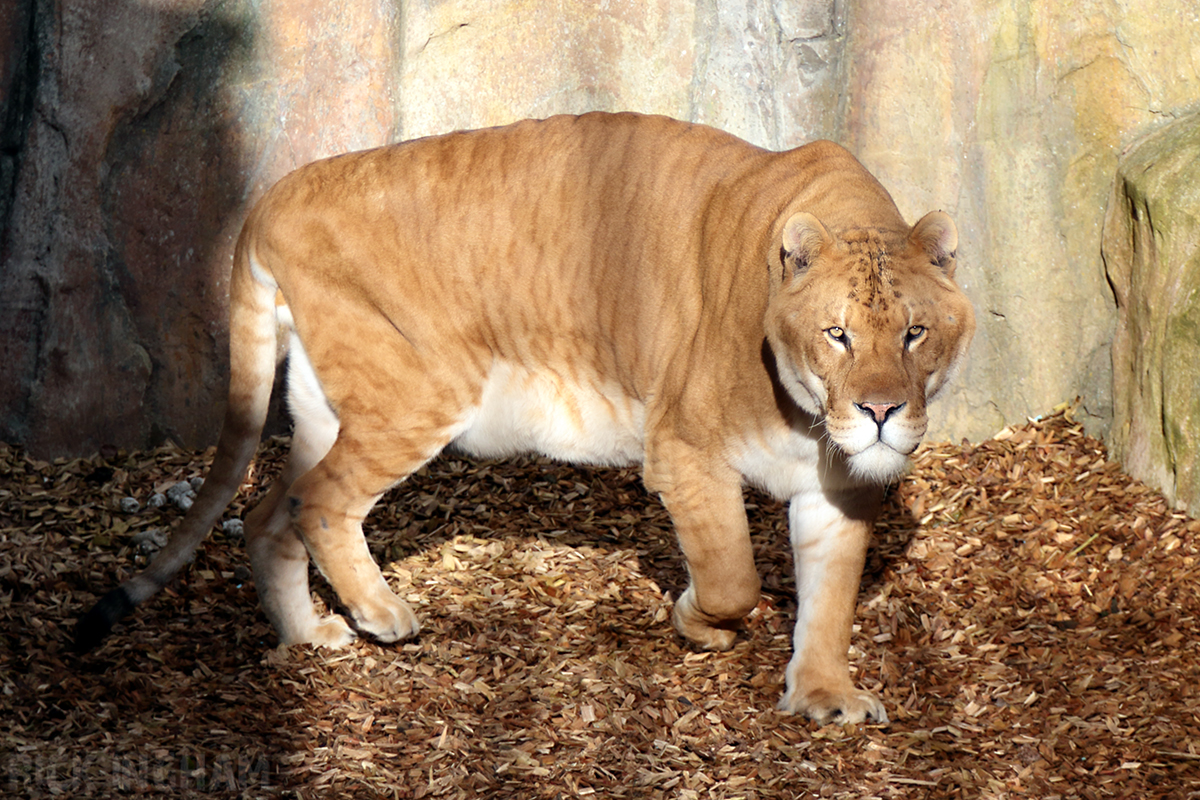 Prince and Sahib
The two Ligers featured in the imagery on this page are two brothers Prince and Sahib. They were born with another sibling in Germany before the pair moved to Heythrop Zoological Gardens when they were 6 months old. They have been there ever since and are now around 15 years old at the time of visiting.
Whilst details aren’t clear, it would make sense for Prince and Sahib to have come from Noah’s Ark Zoo, Gromitz they rescued a male and female Lion cub with 1 female tiger cub from a closing safari park, which eventually led to the tigress becoming pregnant by accident. Shortly after that the tigress moved out, so this would not happen again. I can only assume the resulting cubs from these were Prince, Sahib and their sibling… 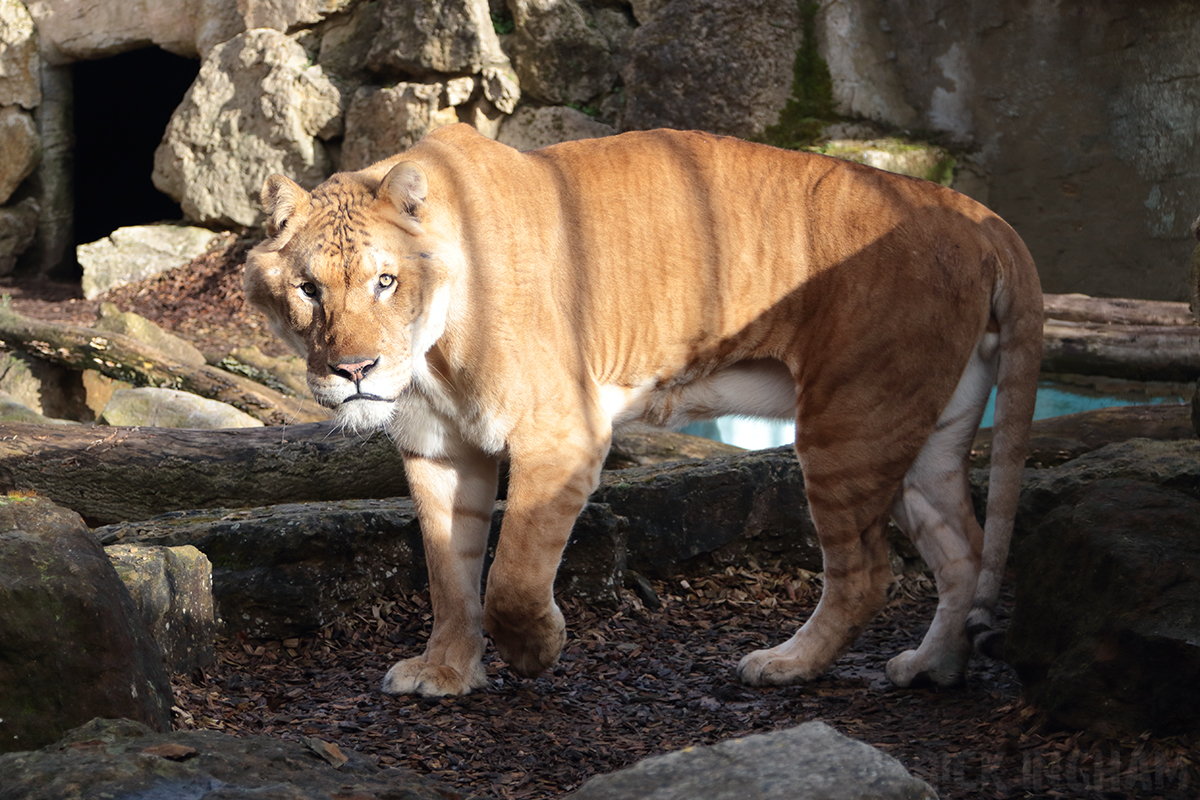 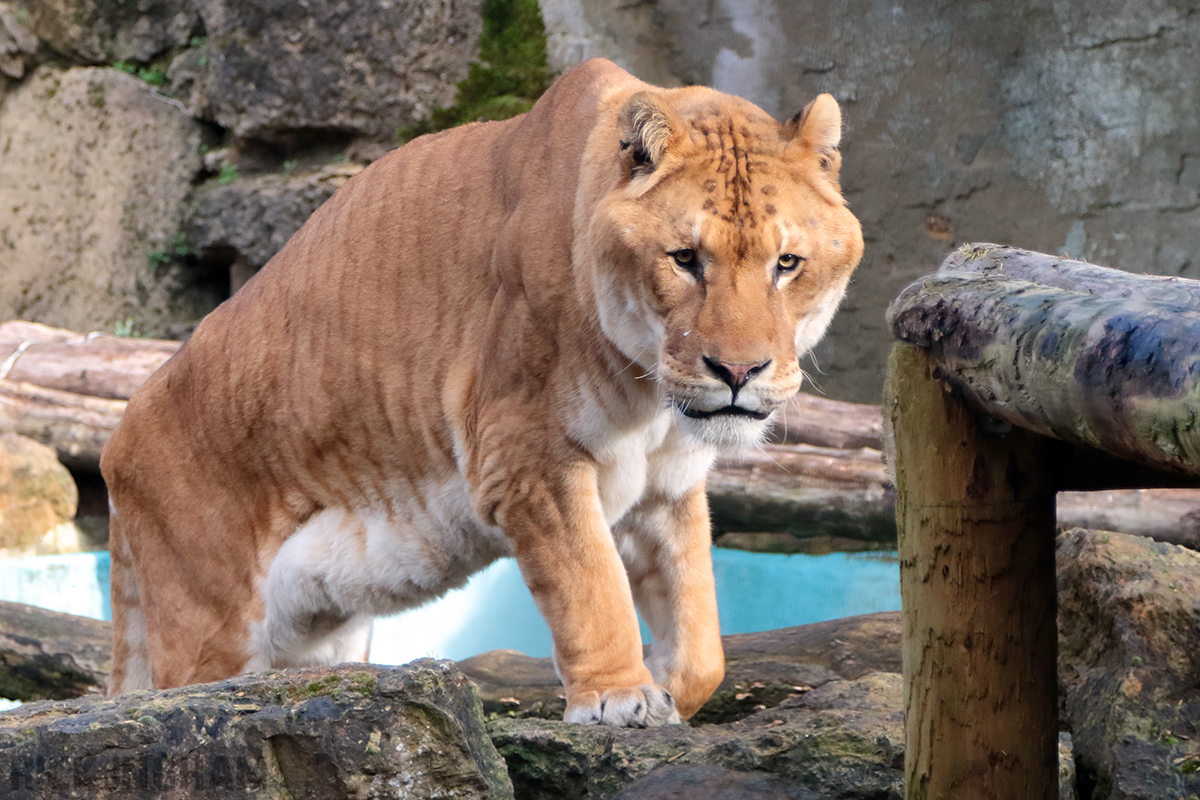 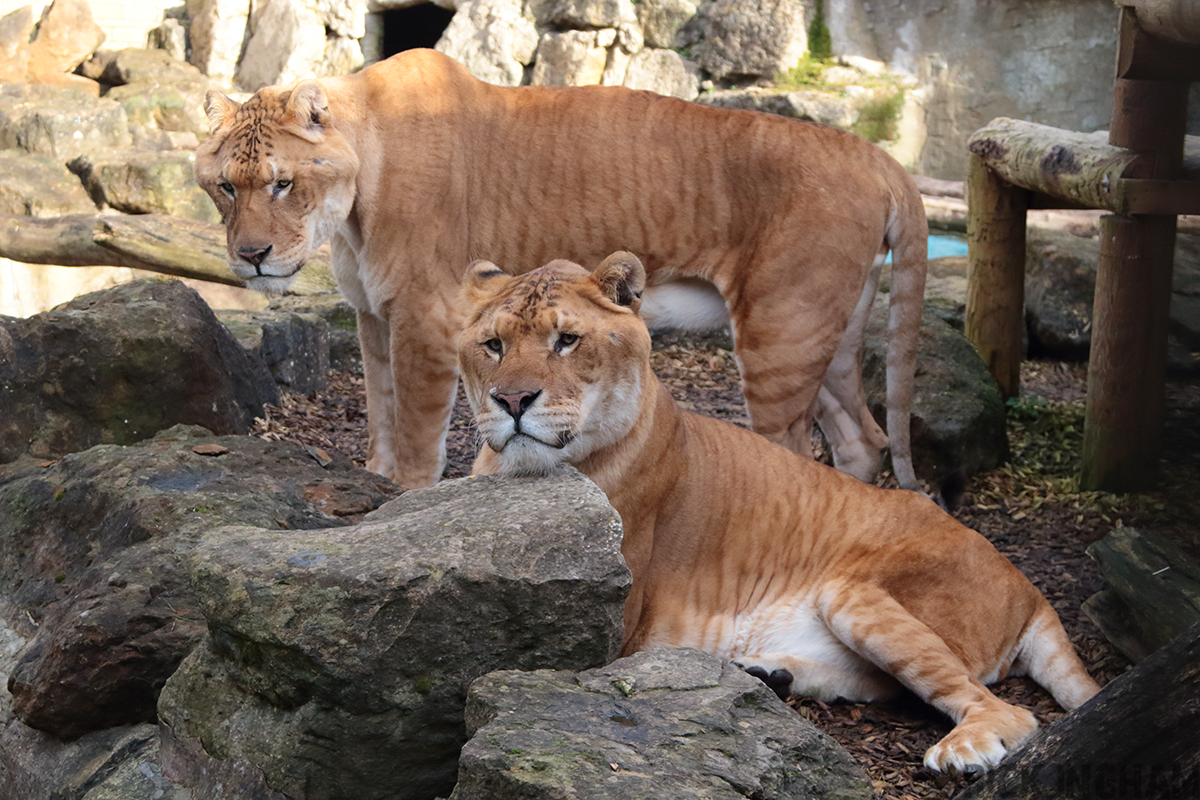 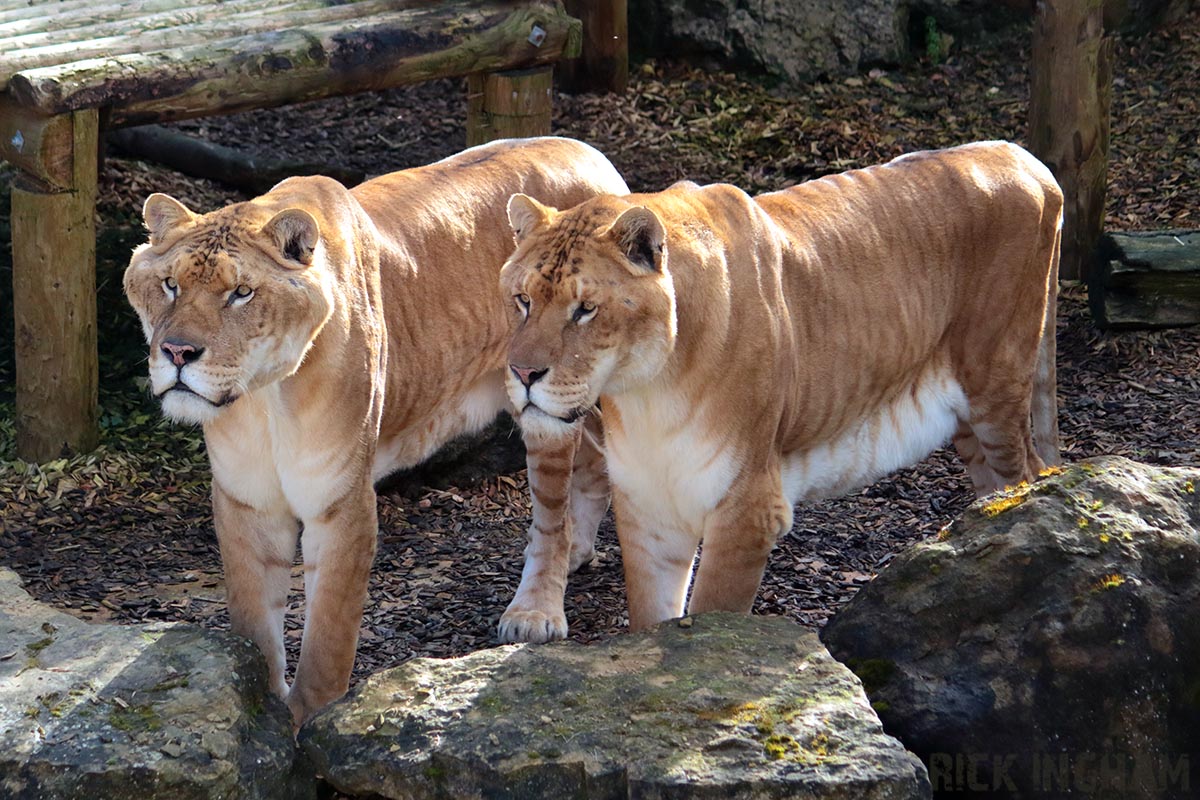 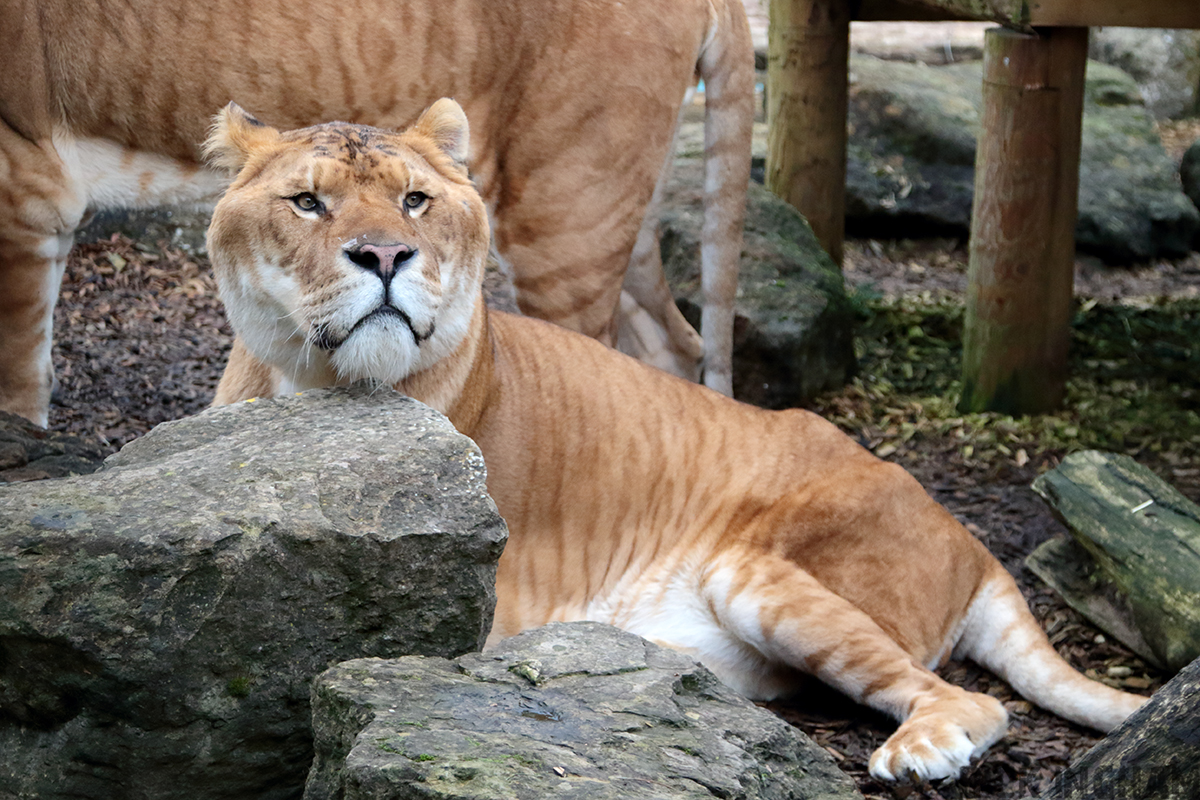 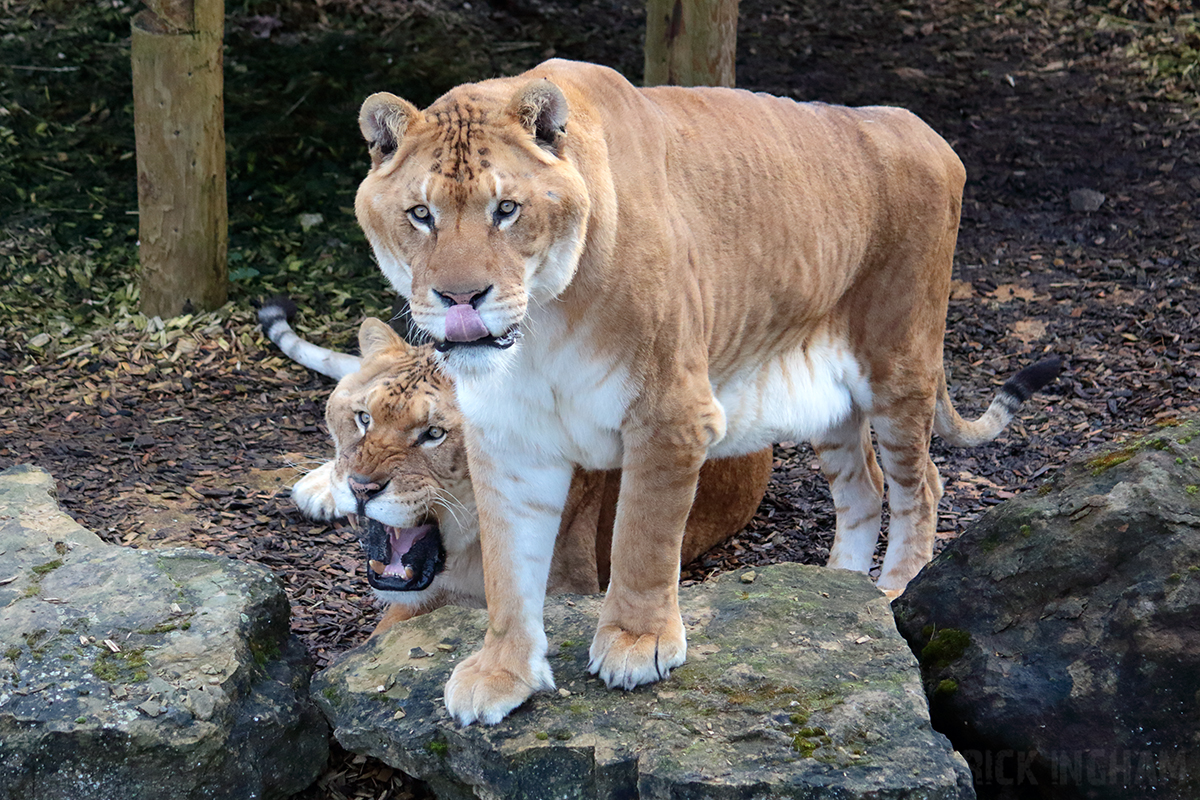