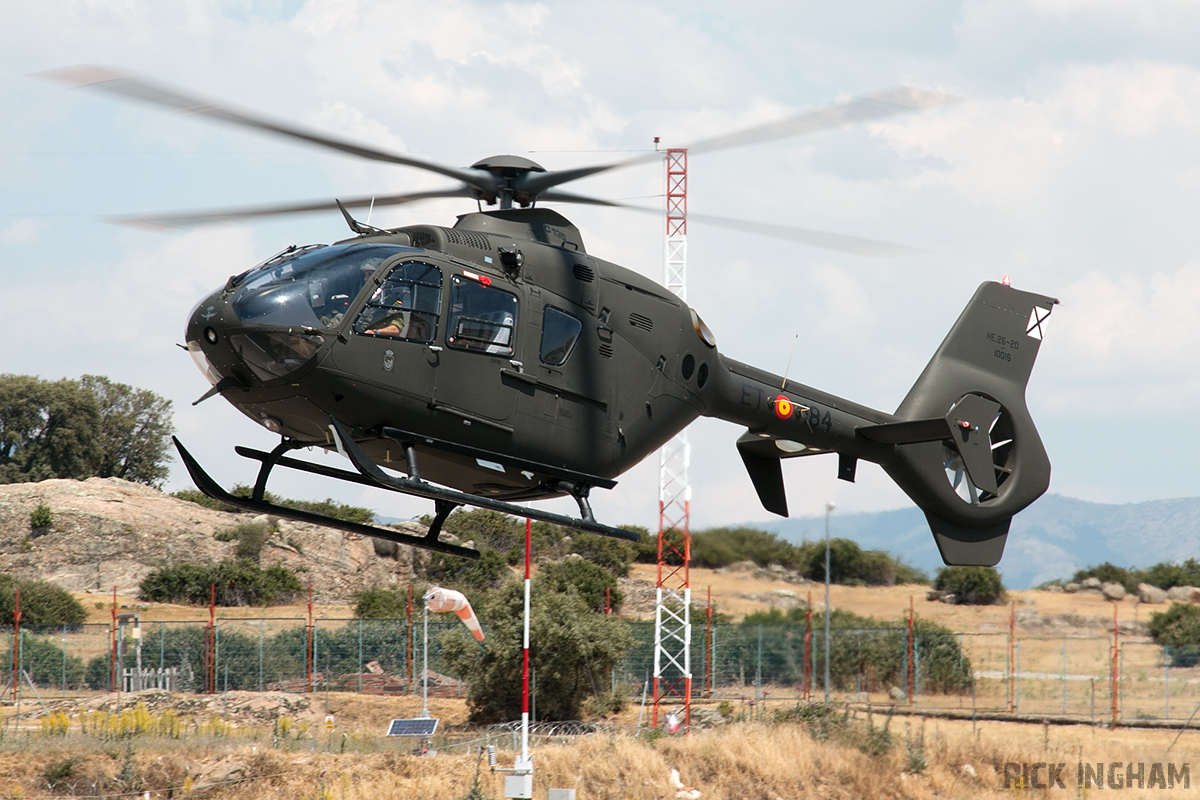 Colmenar Viejo is a town situated just 30 Kilometres (18 miles) north of Madrid which is home to around 44,000 people. It is also home to the headquarters of the Spanish Army’s Fuerzas Aeromóviles del Ejército de Tierra (Army Airmobile Force) otherwise known as FAMET. The base, which opened on 27th May 1966, is named Coronel Maté after one of the first Helicopter Unit Commanders of FAMET and has around 40 helicopters consisting of CH47D Chinook, EC135 and Super Puma. 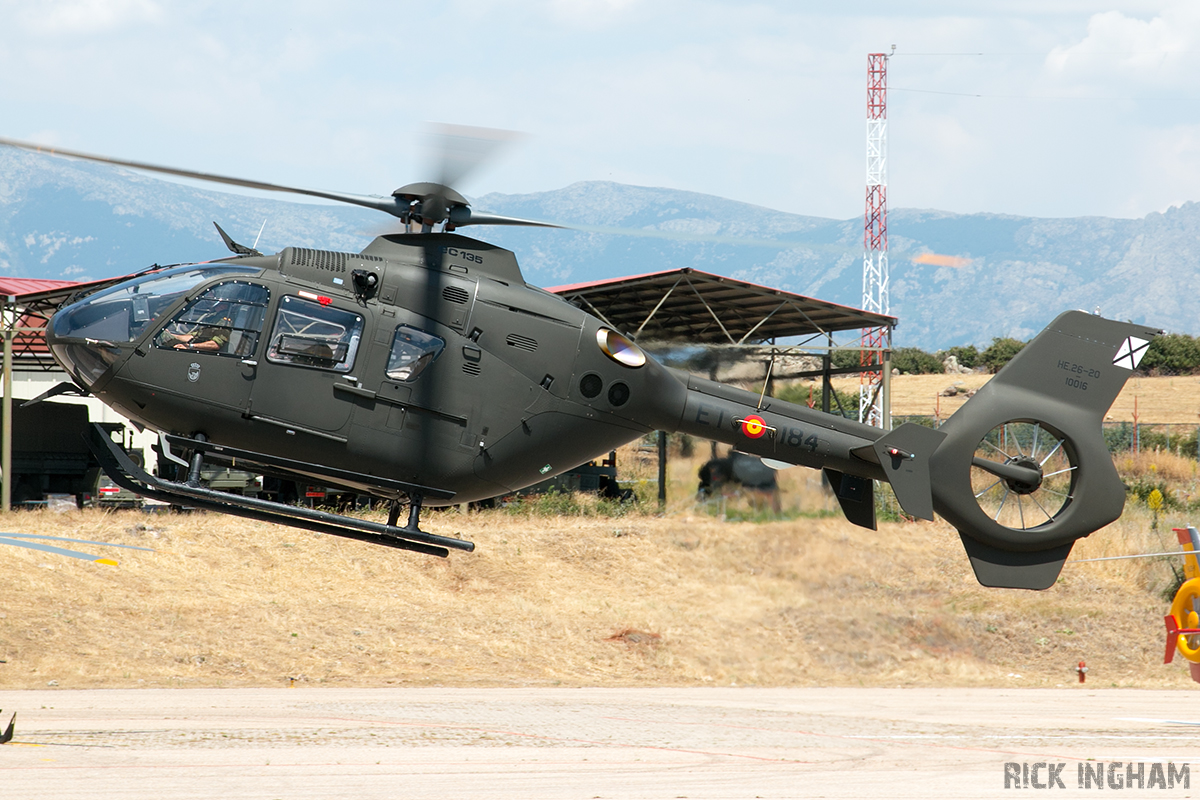 For aspiring FAMET pilots, their journey initially begins at Armillia Air Base near Grenada with the Spanish Air Force firstly on the Eurocopter EC-120 Colibrí and then instrument flying on the Sikorsky S-76. FAMET pilots then move to the Centro de Enseñanza de Helicópteros de FAMET (CEFAMET) at Colmenar Veijo and train on the Eurocopter EC135. Here they are taught the tactical side of flying including low level, confined, mountain, dust and night flying using night vision goggles (NVGs). In total a student pilot will fly around 200 hours before moving to an operational Battalion. 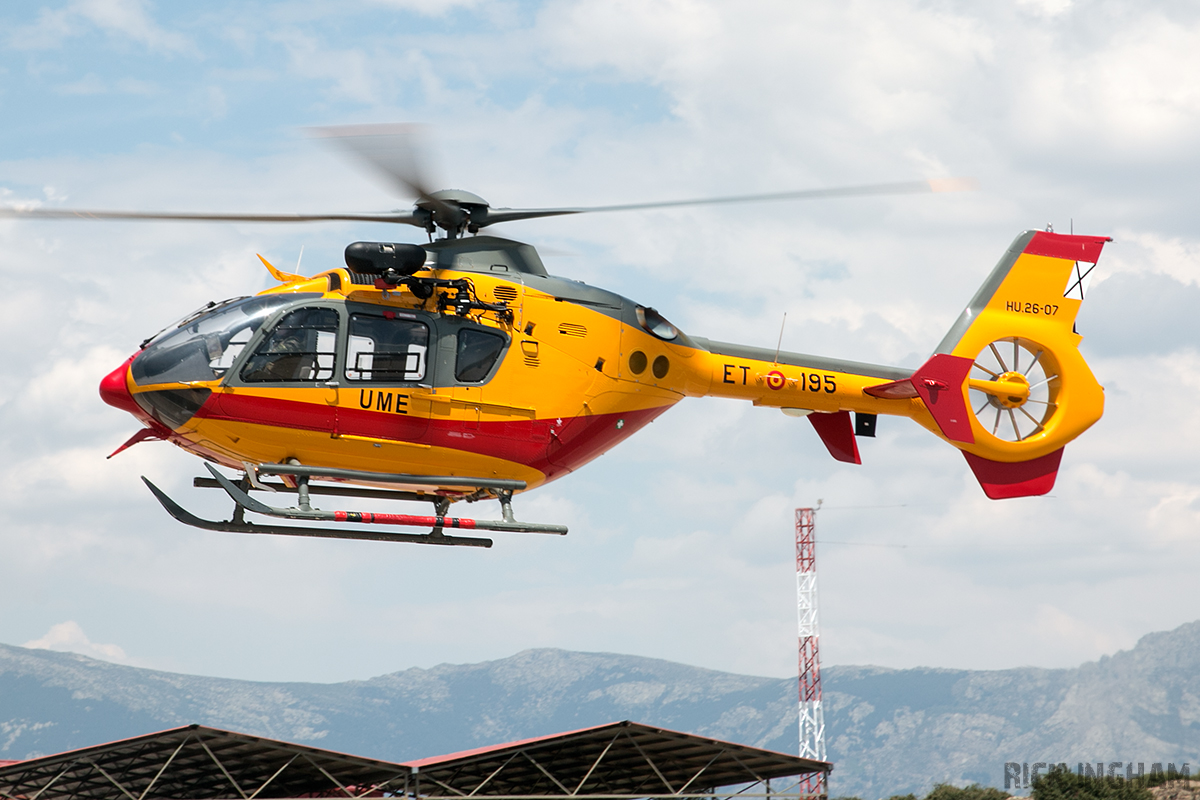 During Spain’s summer months, the intense heat and dried out grass cause large wild fires far too big for ground units and quite often unreachable by road. To assist the countries’ emergency services and civilian companies, the Spanish Air Force operate a unit known as Unidad Militar de Emergencias (UME) which provide aircraft to help combat the fires.
A detachment of four Eurocopter EC-135s from Batallón de Helicópteros de Emergencia II (BHELEME II) from Bétera near Valencia are permanently based at Coronel Mate airbase able to search and rescue the surrounding population of Colmenar Viejo. 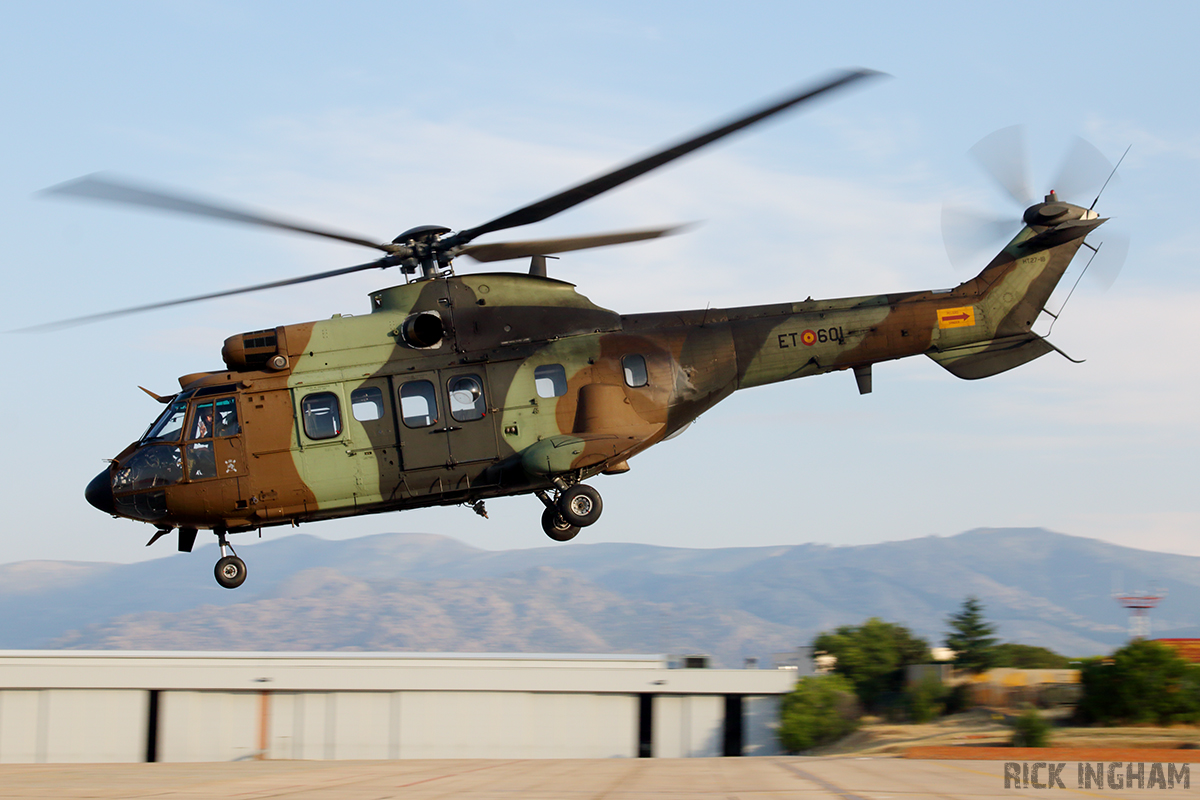 Another unit that resides in Colmenar Viejo is The Batallón de Transmisiones de las FAMET (BTRANS) who operate the Super Puma and Cougar. This battalion is tasked with establishing secure communications and data links in the battlefield and to command and control operations from a forward location. Due to the complexity of the squadron’s duties, it is divided into sub-units, which is unusual for a FAMET battalion.

- Electronic Maintenance Unit (UMEL) – Responsible for all logistics and maintaining and developing electronic warfare tools and systems to ensure mission success. This does not include the Puma’s avionics.

In addition the battlefield work, BTRANS also has two Super Puma AS332 (HU-21) airframes in VIP configuration. Externally the most distinguishing feature is the giant air conditioning box on the side of the aircraft. 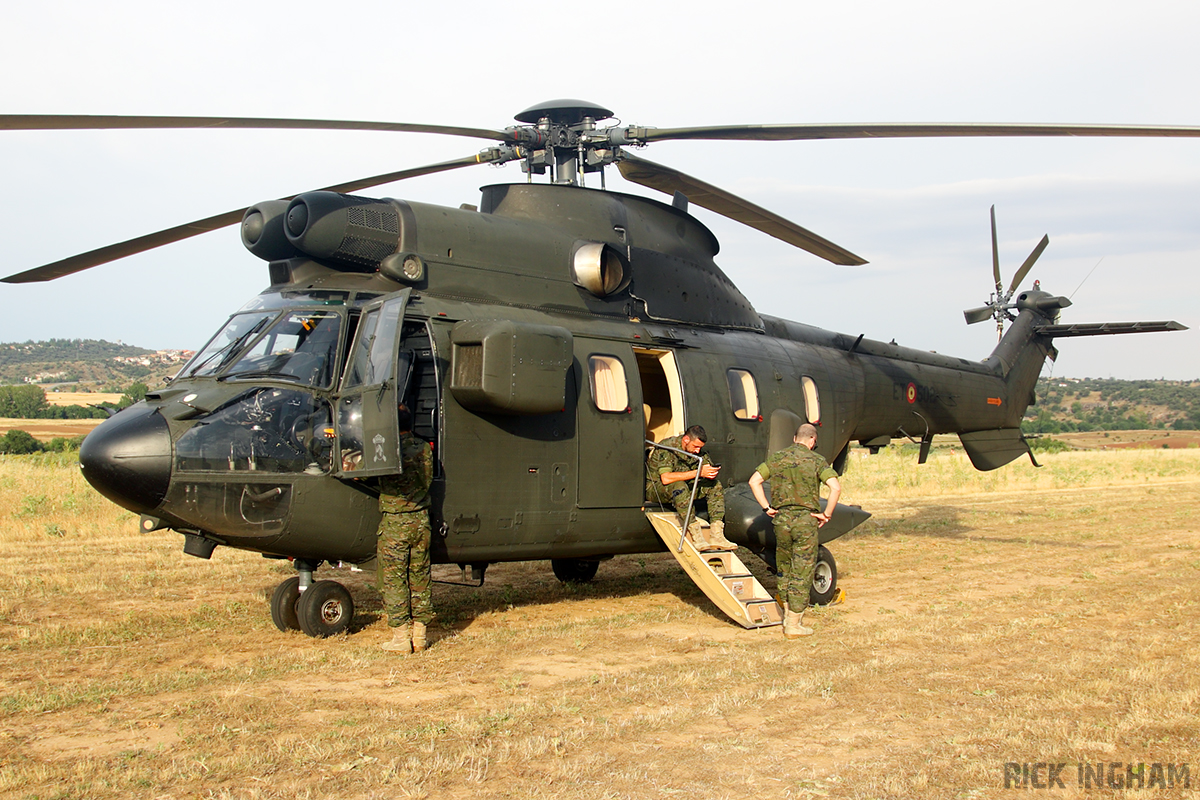 The biggest helicopter battalion at Colmenar Viejo is the Batallón de Helicópteros de Transporte V (BHELTRA V).  The unit operates 17 CH-47D Chinooks, having been upgraded from the earlier 1970’s CH-47C model in the 1990’s. BHELTRA V can be seen as the grafters of FAMET and can be tasked to do a wide variety of roles including Troop moves, armament and replenishment supplies, underslung heavy equipment, special forces insertion/extraction and combat search and rescue. 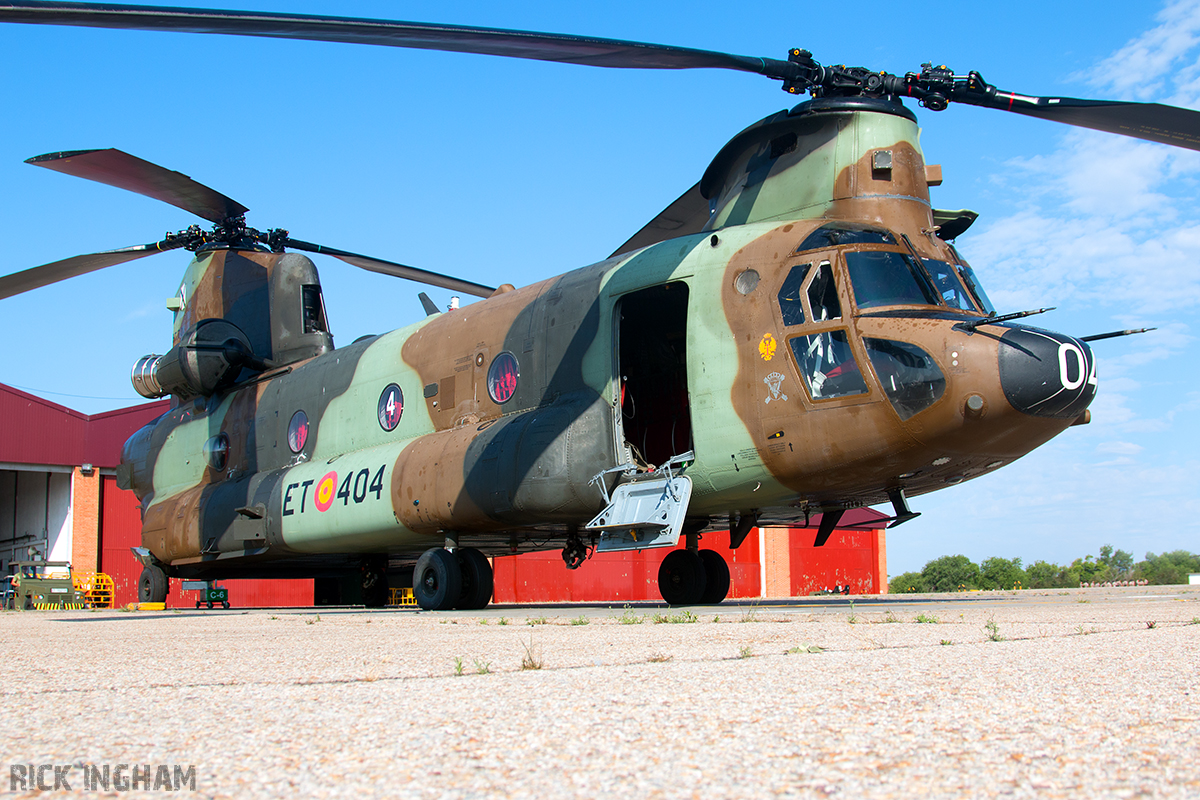