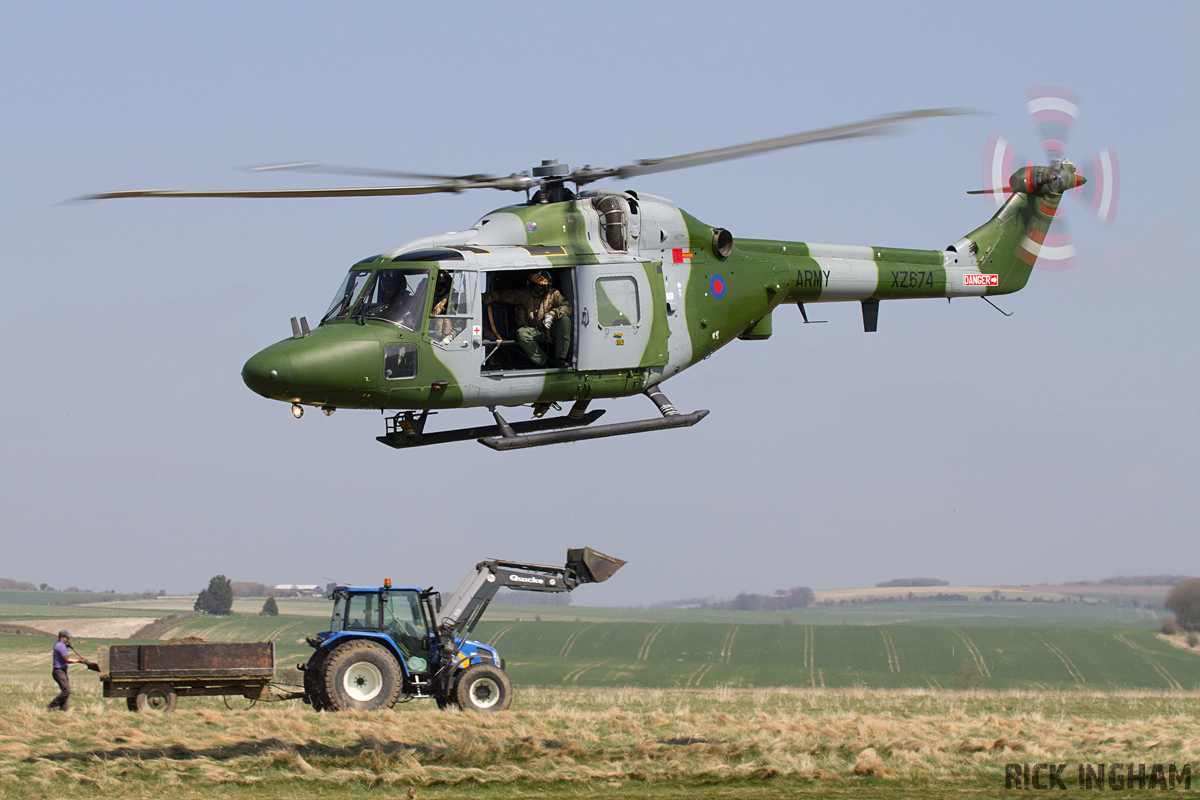 AAC Middle Wallop in Hampshire has been a hive of activity since 1940 when it opened with the intention of being a training base. When the Second World War broke out however, 'RAF Middle Wallop' became home to Spitfire and Blenheim aircraft with 609 Squadron and 604 Squadron respectively. Since then, Middle Wallop has hosted the Royal Air Force, United States Air Force, Royal Navy and Army Air Corps. Nowadays, the airfield is a lot quieter with a very small number of aircraft using it. Rick Ingham takes a look at how the airfield still plays a big role in defending the United Kingdom. 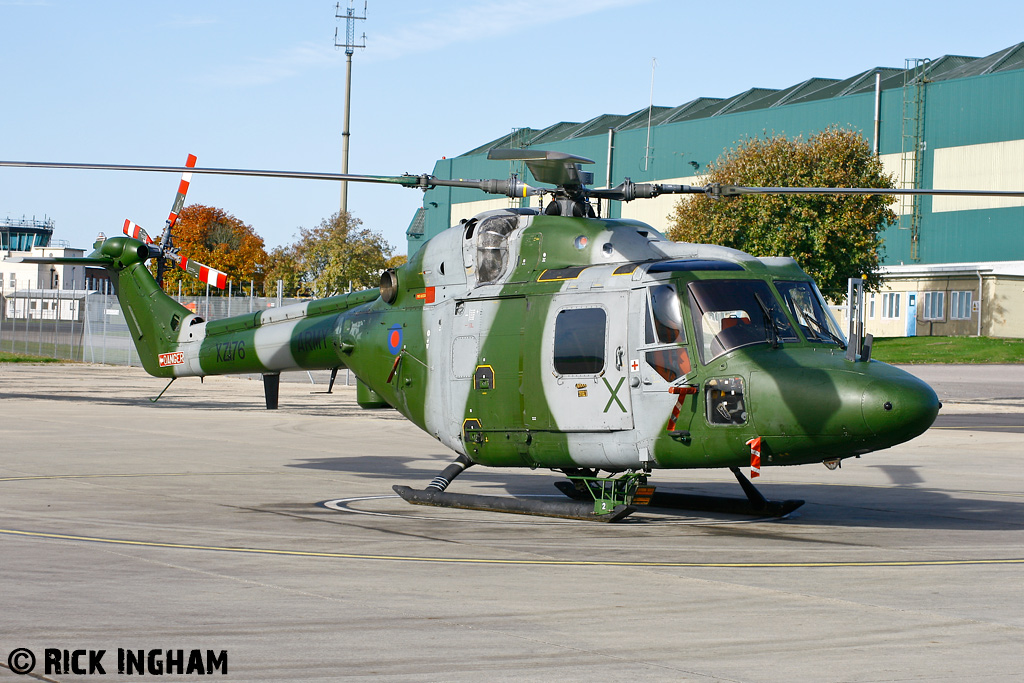 After the war from 1954, Middle Wallop became host to the Joint Experimental Helicopter Unit (JEHU) which evaluated battlefield helicopters for their operational roles including the Westland Whirlwind and Bristol Sycamore helicopters. In 1957 British Army Aviation became serpate from the Royal Air Force and the 'Army Air Corps' was formed at Middle Wallop. 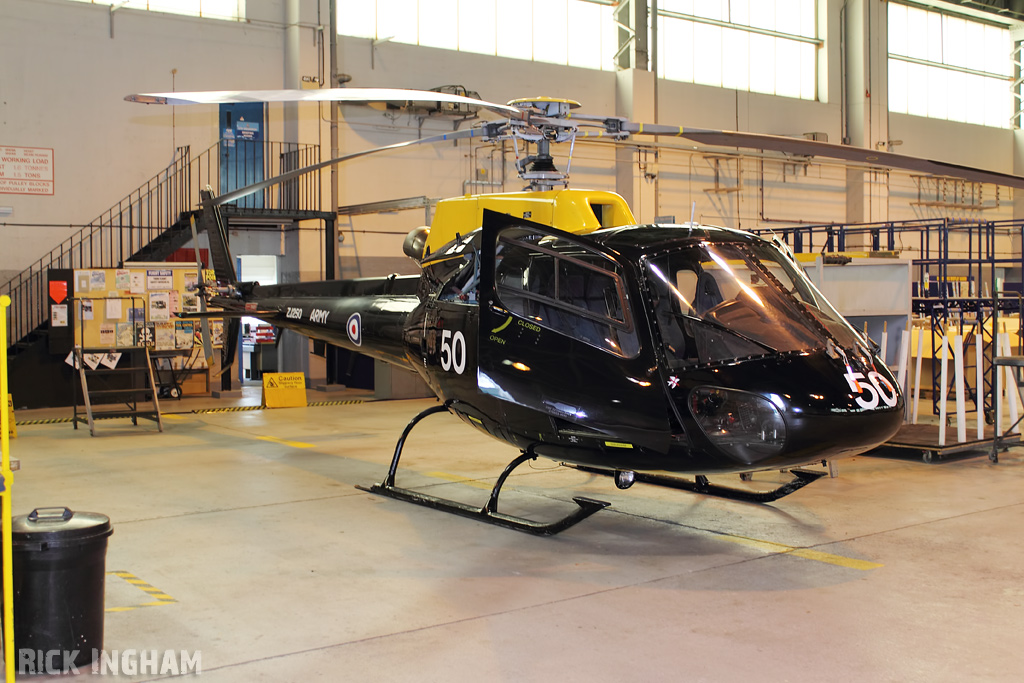 Today the Army Air Corps still operate at Wallop, albeit in a reduced capacity.

AAC Middle Wallop is primarily the School of Army Aviation (SAAVn). SAAVn has several elements within it such as ground trades but the majority is the flying. 2 (Training) Regiment Army Air Corps is the bulk of SAAVn, comprising of three elements:
- 668 (Training) Squadron AAC - Responsible for the ground training of recruits to AAC (Phase 2 training). This consists of signals, management and leadership training of AAC NCOs (Phase 3 training).
- 676 Squadron - First stage of flying for potential pilots, known as 'Army Flying Grading'. The students fly the Grob Tutor to find out if they have the aptitude to fly helicopters in the Army Air Corps.
- 670 Squadron - Provides students with their first Operational flying training on the Squirrel.
- 671 Squadron - Recieve the students that passed the Army Pilots Course on 670 Squadron and train them on Lynx, Gazelle or Bell 212.
- 673 Squadron - Teaches the students with the highest grade of flying from 670 Squadron to fly the Apache AH1, the AAC attack helicopter.
- Flying Wing - Conducts the flying training. FBHeliservices hold the contract for basic flying instruction and aircraft maintenance.
- Command and Tactics Wing - Responsible for the tactical training within the AAC. This consists of a NATO sequence of orders and a series of mission scenarios to be planned then executed in the Aviation Command & Tactics Trainer (ACTT), which is a mission simulator. 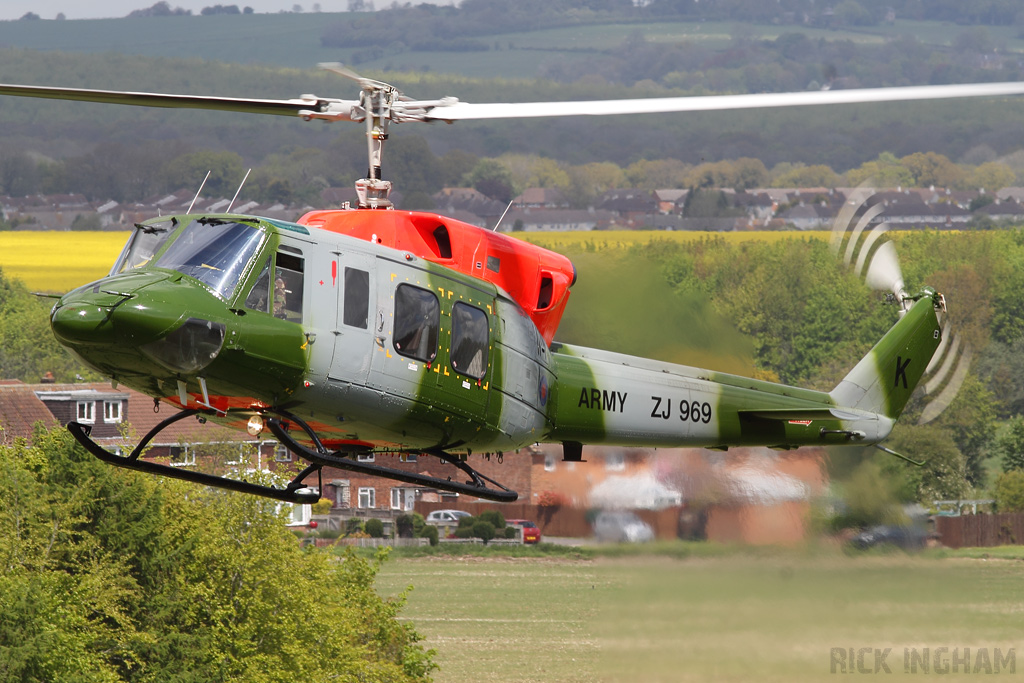 To become a Pilot in the Army Air Corps, you first need to join the Army as a Soldier and go through Royal Military Academy Sandhurst.
When you make it known you wish to go through the Army Pilots Course (APC) you will go for Aircrew Selection tests which are conducted at RAF College Cranwell which lasts two days. Army candidates require a minimum aptitude score of 80/180 to progress onto the next phase. This pass mark is lower than the RAF and Navy as AAC candidates have to also go through Army Flying Grading which the AAC considers a far more accurate indicator of the skills needed to be an Army pilot.
Army Flying Grading is 13 hours flying within 3 weeks to see if you have the right aptitude and willingness to learn. This is now conducted in the Grob Tutor, which recently replaced the Slingsby Firefly. Students who have demonstrated they have the necessary potential at AFG will progress onto the final phase at the Pilot Selection Centre. This is run by HQ SAAvn and selection includes aptitude tests, a medical, and finally a selection interview. 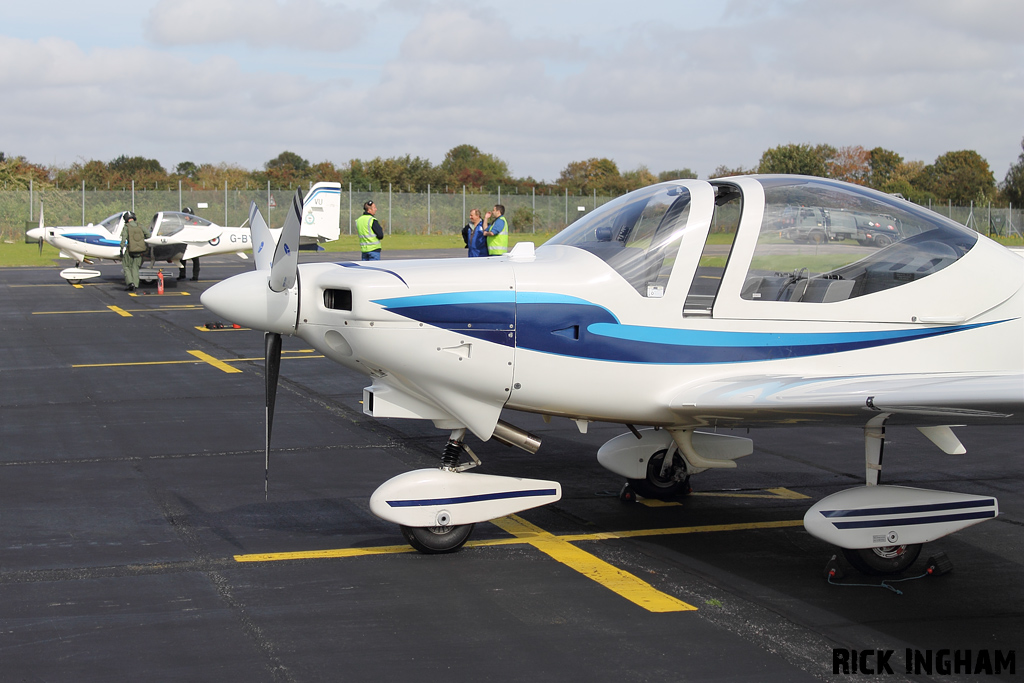 The Army Flying Course begins with four weeks at RAF Cranwell going through the theory side of flying. Students learn the basics such as Meteorology, Principles of Flight, Aircraft Operations, Navigation and Technical instruction.
You then head to RAF Barkston Heath to undertake EFT (elementary flying training) which is the first Flying Training you will recieve. EFT consists of 40 flying hours of fixed- wing flying training over 14 weeks on the Grob Tutor.
Once students complete EFT, they spend 1 week of aeromedical and survival training at RNAS Yeovilton before heading to DHFS (Defence Helicopter Flying School) at RAF Shawbury in Shropshire. This is where all three air arms train their rotary pilots. (My Shawbury report can be found here) 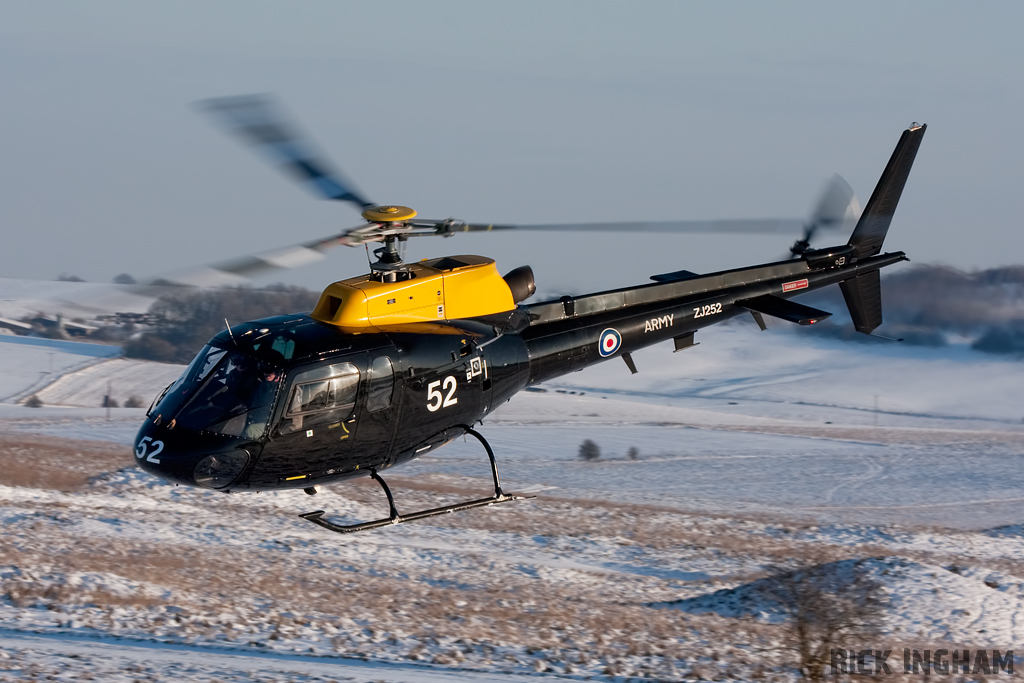 The first 3 weeks at Shawbury consist of basic helicopter theory in the classroom covering turbines, hydraulics and helicopter principles of flight. After going through the gruelling classroom theory the students then join 660 Squadron for 8-10 weeks flying training on the Squirrel.
Here students go through basic flying techniques, take offs, landings, circuits, hovering, sloping ground landings, advanced transitions, confined areas, quick stops and practice emergencies including autorotations and engine off landings. The aim of the time spent here is purely to learn how to fly a helicopter.
Students then progress onto 705 Naval Air Sqn at DHFS. This phase also starts with 1 week advanced groundschool, followed by 8-10 weeks on the Squirrel again. This element offlying is to introduce the student to 'Advanced rotary flying' which includes Instrument Flying, Night Flying, Map Reading, Low Level Navigation, and confined areas. 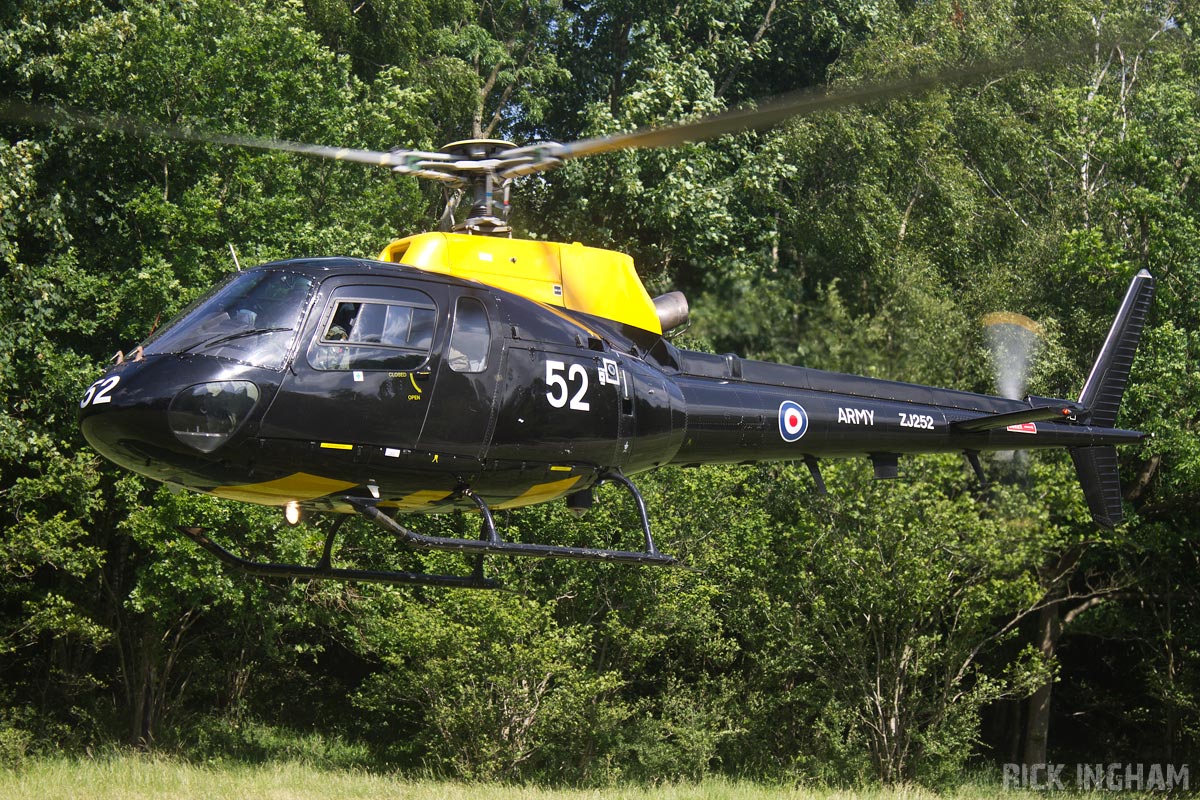 At this point of the APC, the students return to SAAVn at Middle Wallop. At this point they are confident flying the Squirrel and are ready to learn how to use a helicopter tactically. The Operational Training Phase (OTP) is 88 hours conducted on the Squirrel once again.
The students go through low level flying, NVG's (Night vision goggles) and other elements such as USL's (Under-slung loads) with the aim towards using these skills in the battle field.
Towards the end of this phase skills already learnt will be honed and improved so that students will instinctivly be able to carry out map reading and be aware of the tactical situation in addition to flying the aircraft safely. On successful completion of this phase students are awarded the Army Flying Badge know as their "wings". A rewarding and satisfying end to 206 flying hours within 18 months. 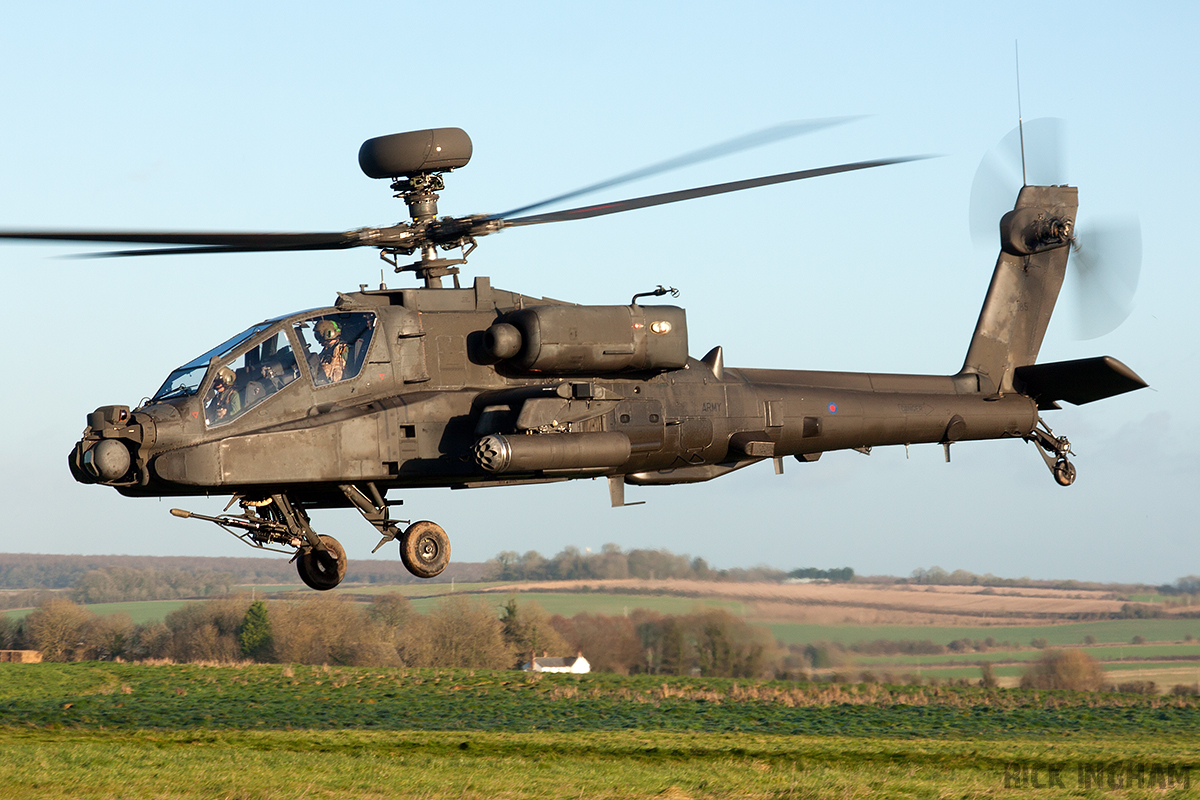 At this point the students who have now become helicopter pilots find out which aircraft they will be posted to. This could be Gazelle, Lynx, Bell 212 or Islander (Fixed Wing). The very best of these pilots are chosen to go 'AH' (Attack helicopter) on the Westland Apache AH1.

The pilots move to the Conversion to Type (CTT) course on their aircraft which teaches them to fly that perticular aircraft. The Gazelle course takes 7 weeks, Lynx takes 9 weeks and AH takes 6 months. Once complete they will leave SAAVn and be posted to their AAC regiment. 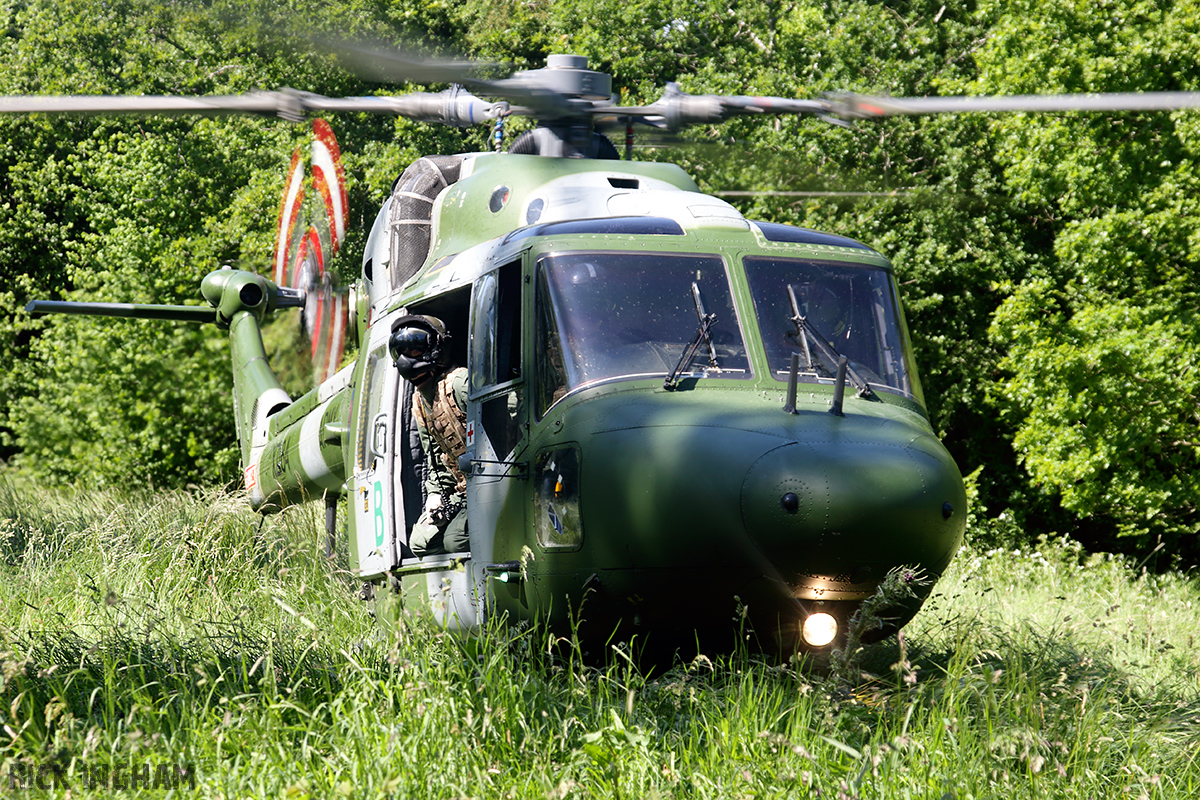 The 'AH' course is where most AAC pilots aim to be on at the end of the APC. A select few are lucky enough to recieve other postings.
'Sunshine postings' with 29 flight BATUS (British Army Training Unit Suffield) in Canada on the Gazelle, 25 flight BATSUB (British Army Training Unit Belize) and 7 flight in Brunei on the Bell 212 are all seen as good first postings. These normally last 3 years before moving on to either Lynx or Apache. 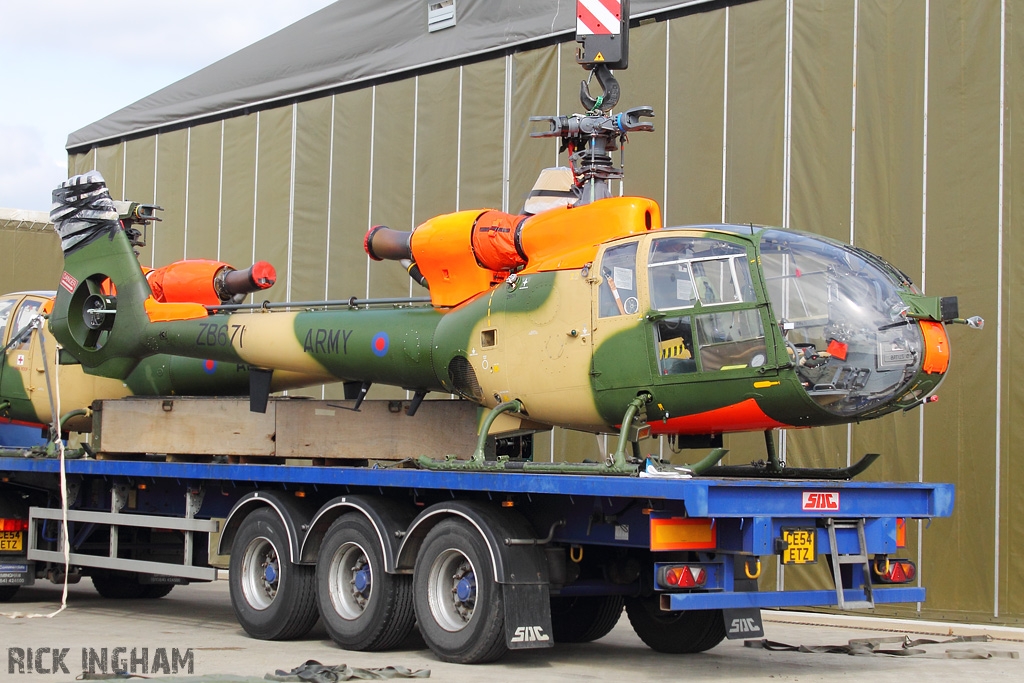 Until the 1st April 2006, Gazelle depth support had been carried out at Middle Wallop, Wattisham, Fleetlands, Netheravon, RAF Leuchars, Bruggen, RAF Shawbury and BATUS in Canada. This was carried out by a mix of people including soldiers, civil servants, Serco, FBHeliservices and Vosper Thornycroft. As military cutbacks were approaching, the decision was taken to combine all these units to one location. The location chosen was AAC Middle Wallop and would also support the Lynx to make maintenance more efficient. The MoD contracted FBHeliservices to carry out the maintenance with around 60 personel on the task. The plan is to reduce the time taken to conduct major servicing by 22% and minor servicing by 50%. GDSH aspires to increase productivity by 33% and aims to release an aircraft from GDSH fit to fly, every 11 days. 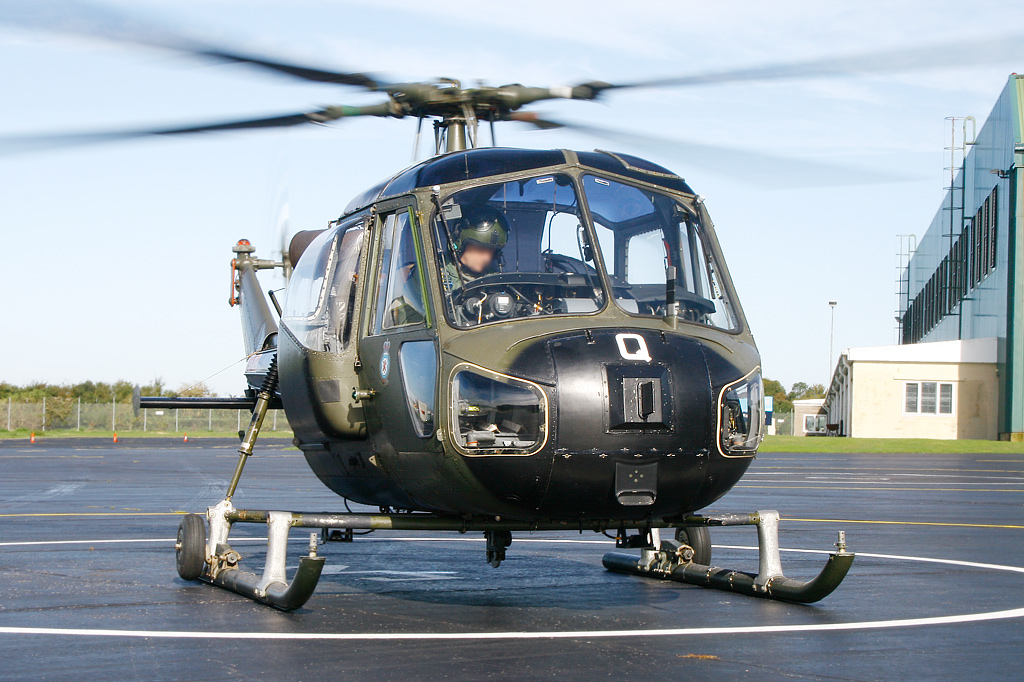 The AHAF, which formed in 1980, currently has six aircraft in it's inventory; Auster Mk 9 (XR244), De Havilland Beaver (XP820), De Havilland Chipmunk T10 (WD325), Bell Sioux AH1 (XT131), Sud Aviation Alouette II (XR379) and Westland Scout AH Mk 1 (XT 626). The flight also has a Skeeter but is no longer cleared to fly as it's wooden blades no longer meet the requirements nessecary. FB Heliservices provide Engineering support to keep each aircraft flying for up to 50 hours per year. 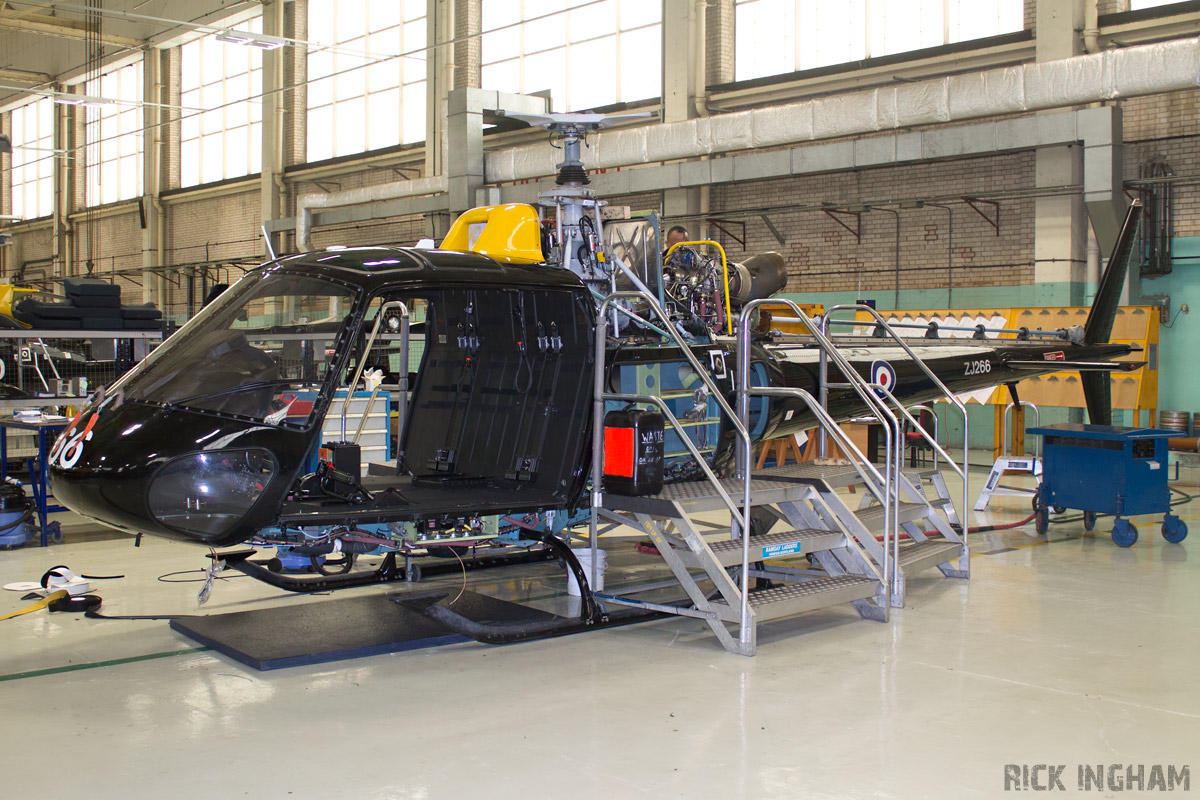 FBheliservices are civilian contractors carrying out a 15 year contract to provide helicopter maintainence and training solutions for the RAF and Army Air Corps. FBH own a fleet of MRCO aircraft (Military Registered, Contractor-owned) which saves the MoD purchasing it's own aircraft.
The fleet consists of:
- 36 Eurocopter Squirrel (For DHFS/SAAVn)
- 12 Bell 412EP Griffin (DHFS)
- 03 Bell 412EP Griffin (84sqn for Search and Rescue operations in Cyprus)
- 08 Bell 212HP (AAC for BATSUB)
- 02 Agusta A-109 (DHFS to teach Algerian students)
- 02 Westland AW139 (SARTU at RAF Valley to teach Search and Rescue operations)

FBH also provides 40% of the flying instructors at the DHFS at Shawbury and all ground school and simulator instructors which sees around 165 pilot students and 44 crewmen through a year.
At Middle Wallop, as well as providing maintainence, FBH provide the Squirrel helicopters SAAVn use which are pooled from the 36 contracted to DHFS.
All together at Shawbury, Middle Wallop and Valley, FBH provide over 36,500 flying hours a year. 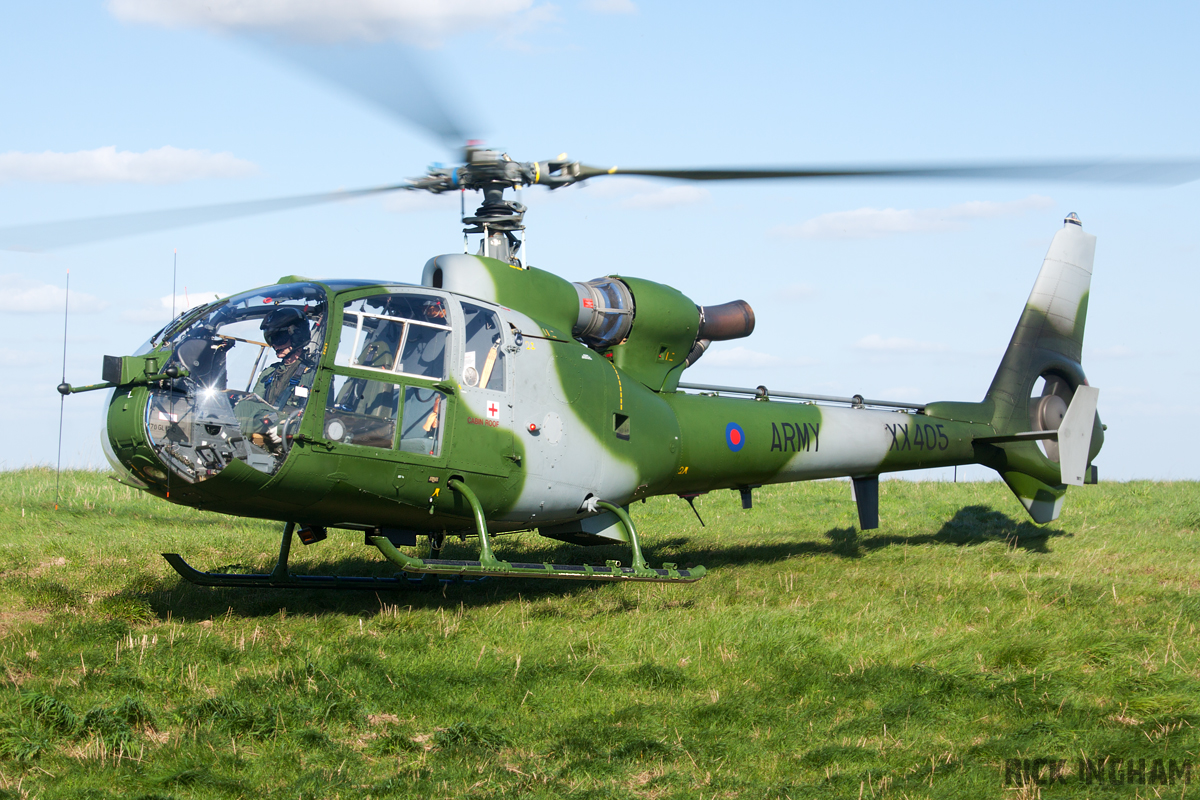 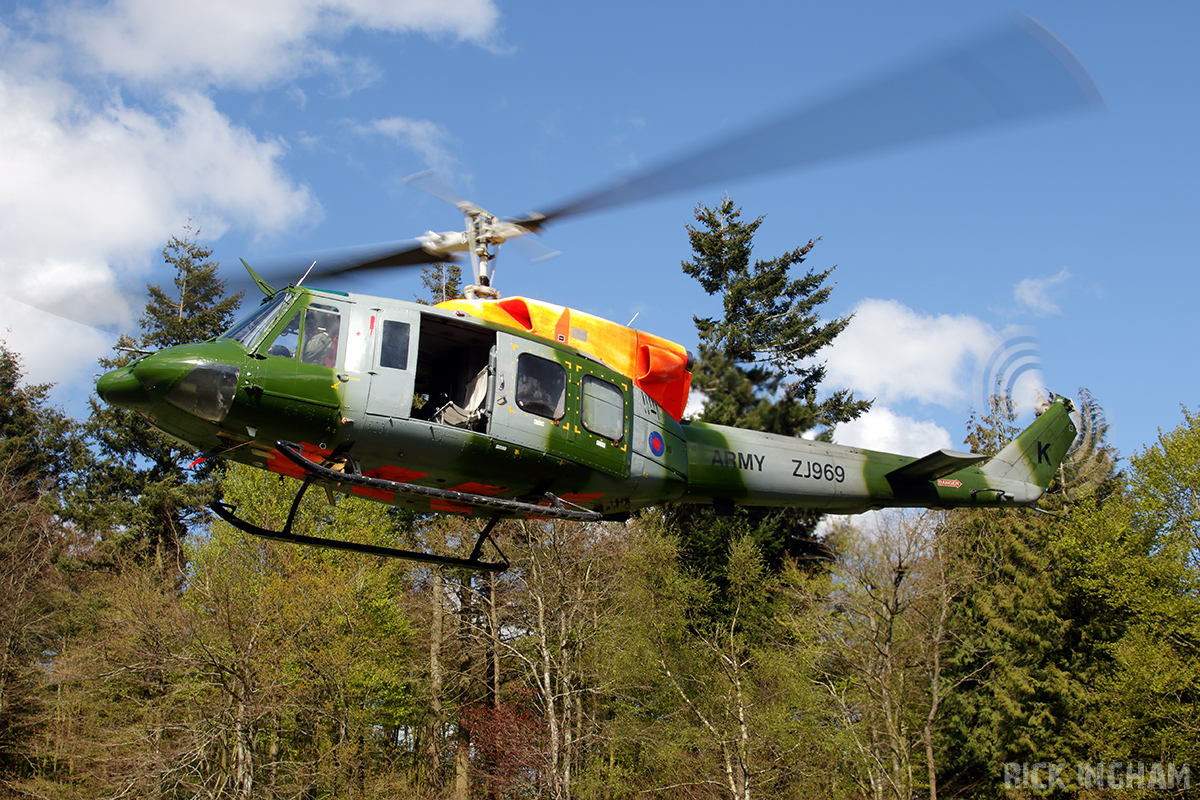 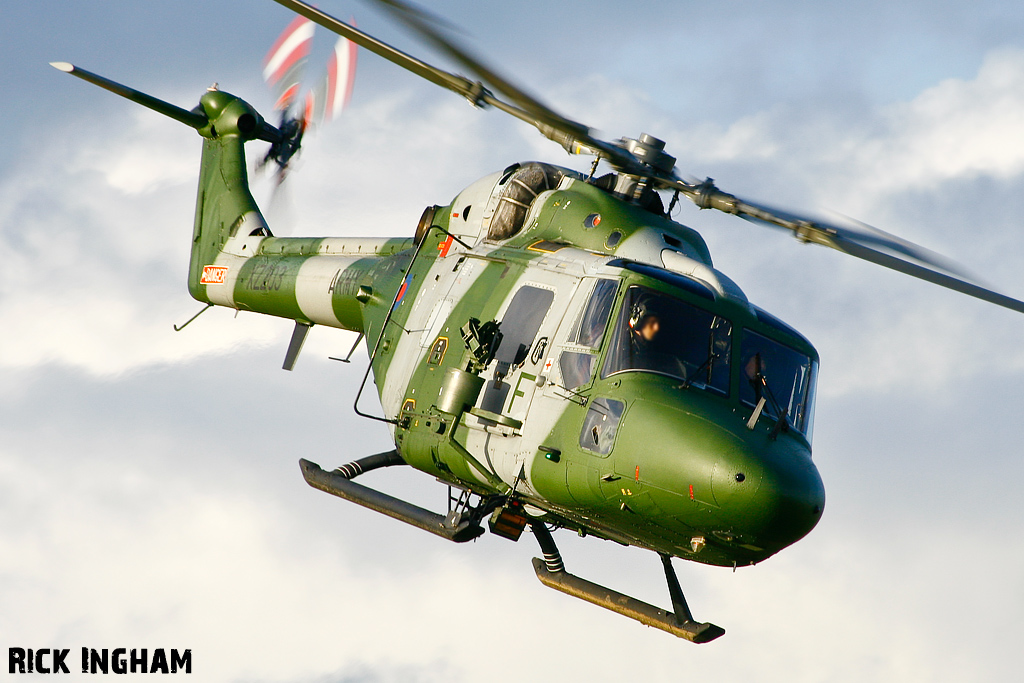 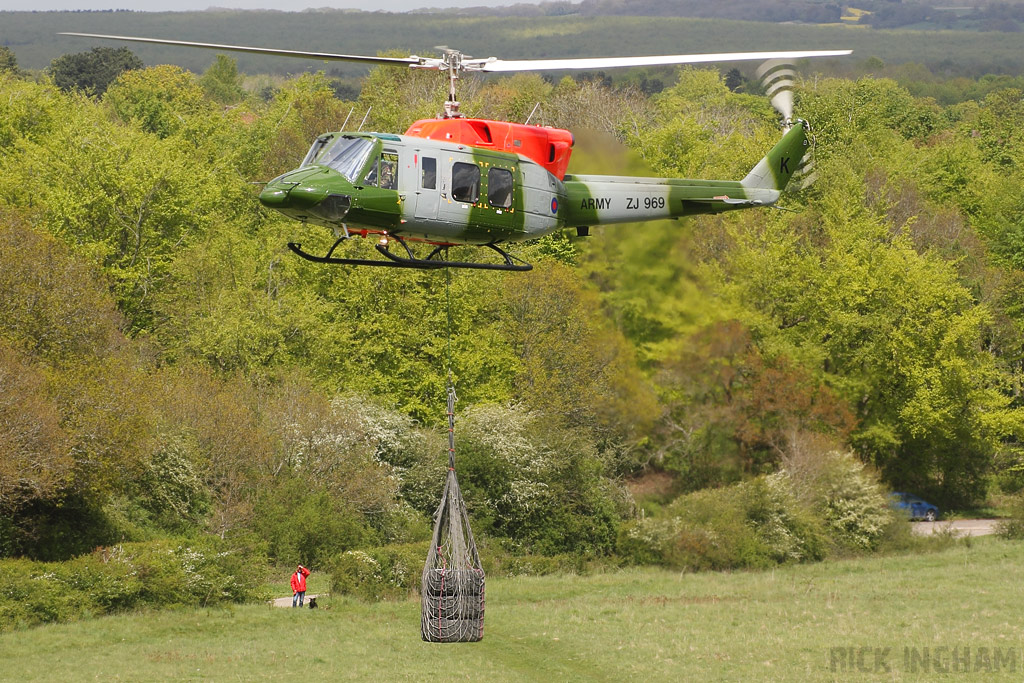 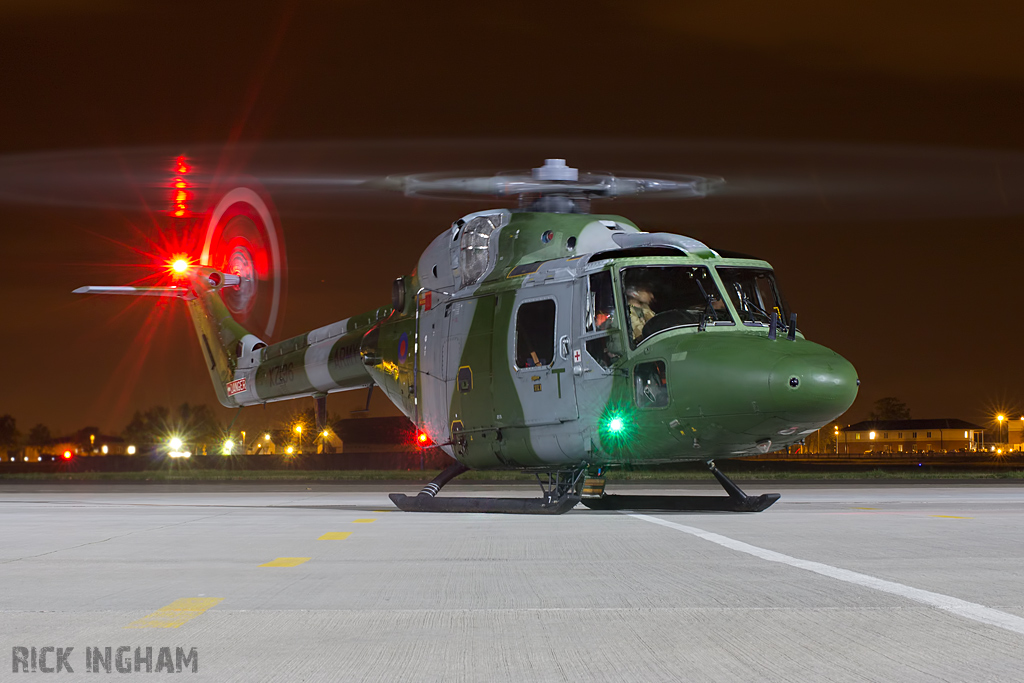