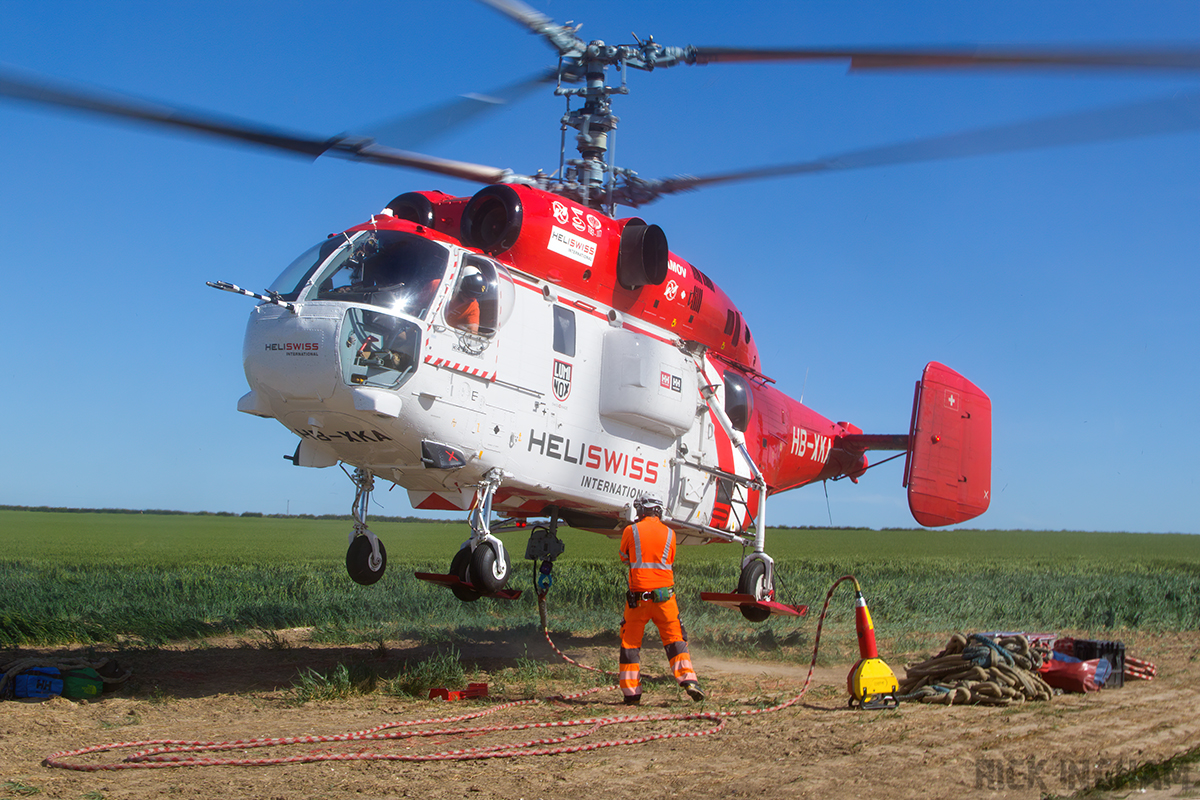 Using helicopters for heaving lifting is a lucrative market and many companies around the world use big ex-military airframes for a variety of jobs including fire fighting, load lifting, ski lift building, electricity pylon work and even cherry drying. Helicopters are perfect for those jobs, but in the UK there is barely any demand for any single one of them.
So when the UK’s tallest free-standing structure, a huge 1,084ft (330m) TV transmitter on Emley Moor, Yorkshire needs a complete upgrade, a heavy lifting helicopter is the only way to do it. 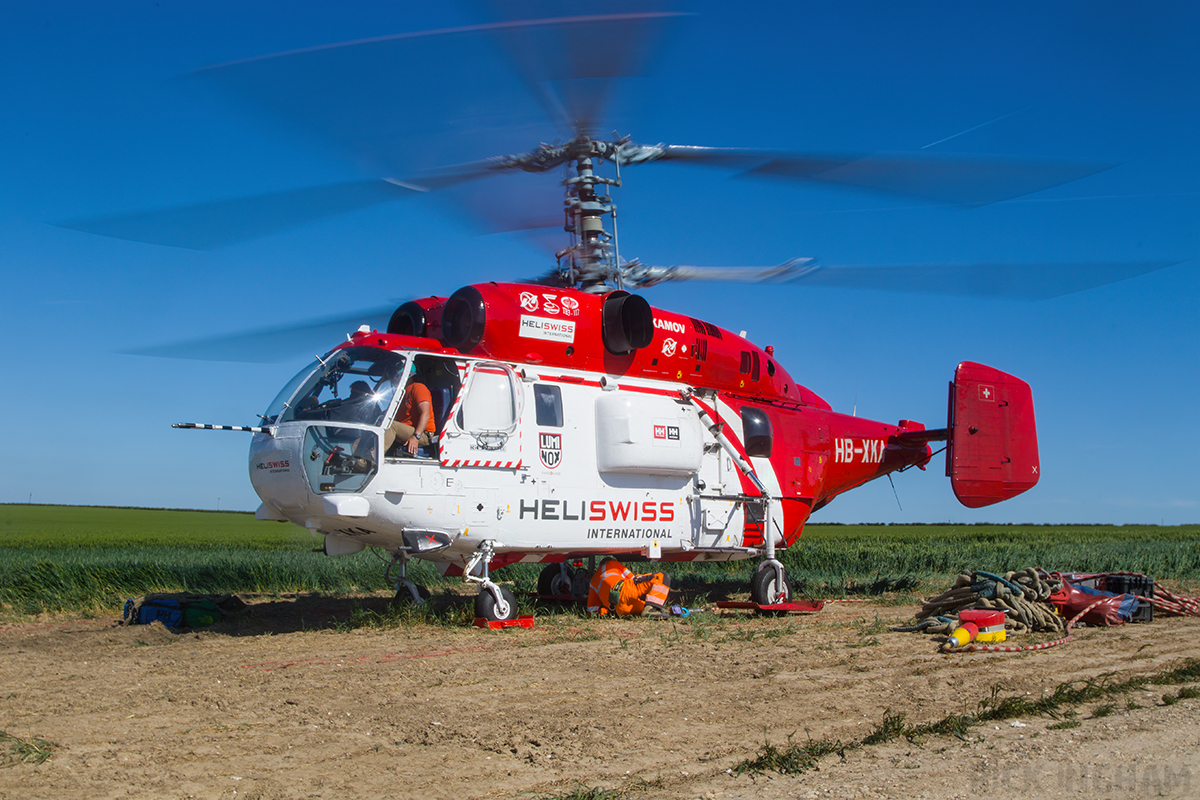 In May 2018, Airtelis used their Super Puma F-HRTS to begin building a temporary transmitter mast that will stand in for the Emley Moor transmitter whilst it’s upgraded. A couple days later HeliSwiss used they’re only Super Puma HB-XVY to finish the work.
August 2019 saw HeliSwiss’ second Kamov KA-32 acquired only 3 months beforehand begin work on the Emley Moor tower refit, taking parts of the old structure down from the top, however the COVID pandemic halted work on the transmitter not long afterwards.

Having always missed opportunities to see the stunning Kamov KA-32, when HB-XKA appeared on radar arriving into Half Penny Green airfield on 6th June 2021, I had to try and snap it!
Not long after arriving it flew to the center of Birmingham to lift parts of the new HMRC building on to the roof. The following day it got to work at the Emley Moor transmitter and after speaking with a worker on the ground there, I was told they were ahead of schedule and it would bee moving on to yet another job, this time in Canterbury, Kent.
A look at the NOTAMs in the area of Kent saw a warning of a helicopter conducting heavy lifting within 1 nautical mile of the sub-station…bingo! 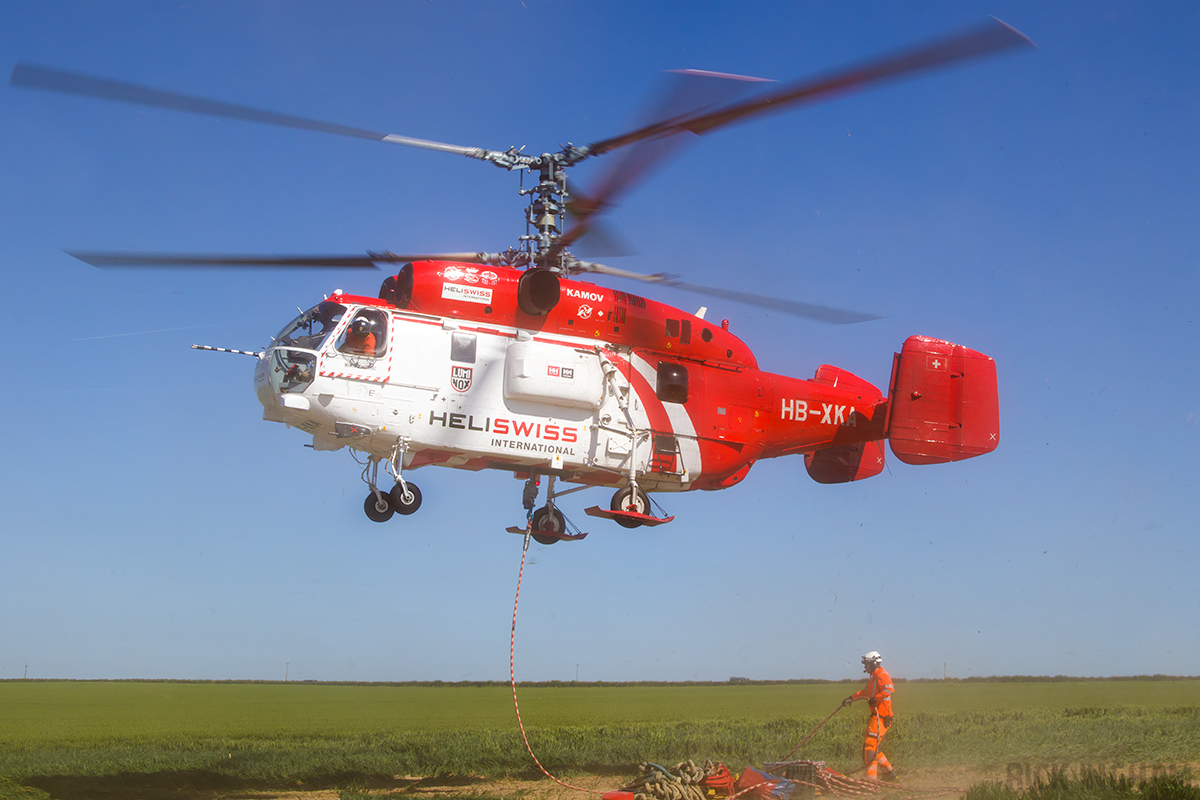 So a very early 4am alarm call on the 9th June saw me driving almost 4 hours to where this NOTAM was plotted.
As the sun begin to rise and the need to find the Kamov quickly before I missed it, I got to the sub-station before quickly realising there was no safe place to land a helicopter anywhere…I moved to the nearest patch of space, which turned out to be a Viridor waste management site where apart from a load of workers staring, there was no sign of any helicopter.
I then looked at a few greens in residential streets, with no result…and then to a common land on top of a hill which required a bit of a walk and asking residents if they’ve seen a strange Russian helicopter!...Still no luck!
Out of ideas, I gave up and decided to head to the nearest airport as a last ditch effort to salvage the trip. 20 minutes into the journey to Manston airport the railway track caught my eye on the other side of a field by the road, then in front of the track just in a dip, I noticed some rotors poking out. Result! 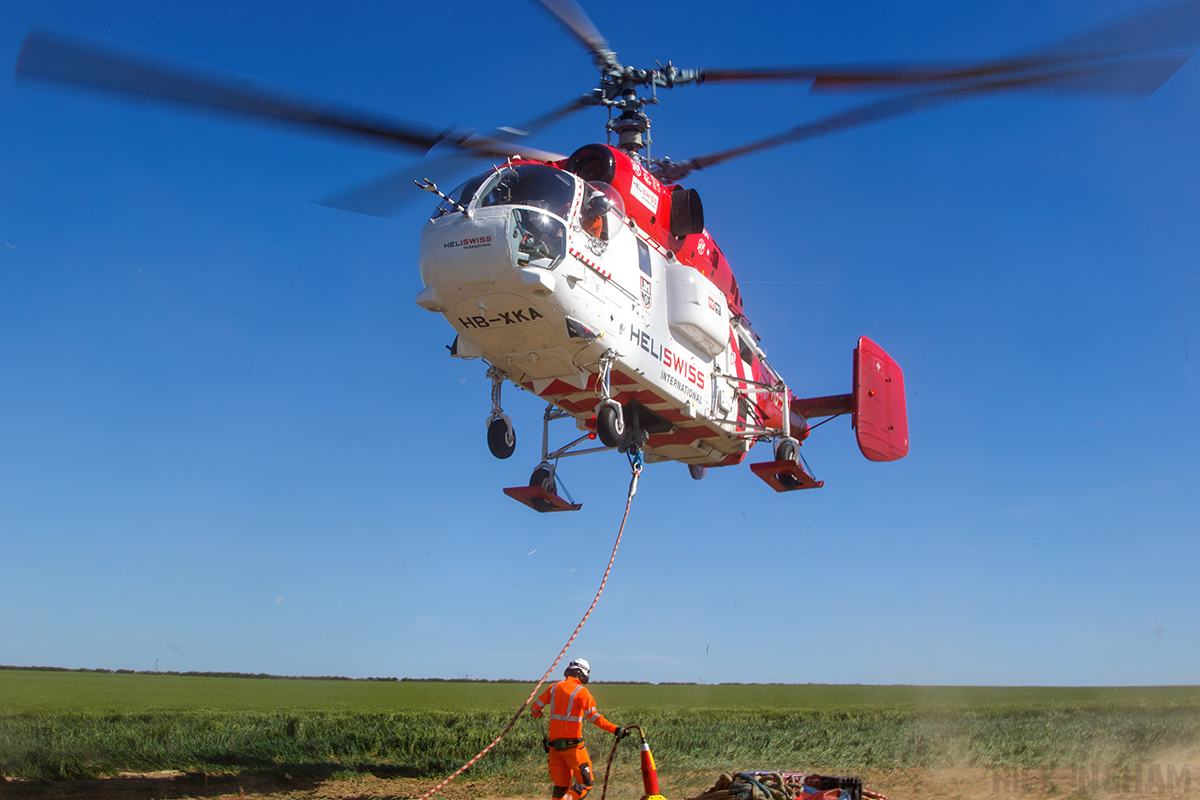 I parked at the entrance to the field which had several construction site signs mentioning no trespassing, hazards and dangers…but I didn’t travel all that way to see it in the distance!
I noticed three people sat on picnic chairs next to the KA-32 so I decided to stroll on down the hill without the camera in view and say hello. The crew were actually very chilled out and invited me to take as many pictures as I wanted.
Within 5 minutes of starting my pictures, the pilot Bruno received the call they were required to lift a component at the sub-station. They were happy for me to stay where I was, which was as close as I could be to fit the whole helicopter in to my wide angle lens!
To my surprise, as Bruno lifted, the downdraft was equal to that of a Chinook despite being the size of a Puma! A wall of soil and rock wiped me out and completely caked my camera. Even a couple weeks later im still having to wipe the camera!
The 30 minutes it was out on the job gave me time to find some tractor tracks in the crops to get a bit of distance, which worked! Once recovered, I decided to leave them to it and thanked them before setting off for home. It turned out that was it for them too as they called into Headcorn for fuel shortly after before returning to Bern, Switzerland. 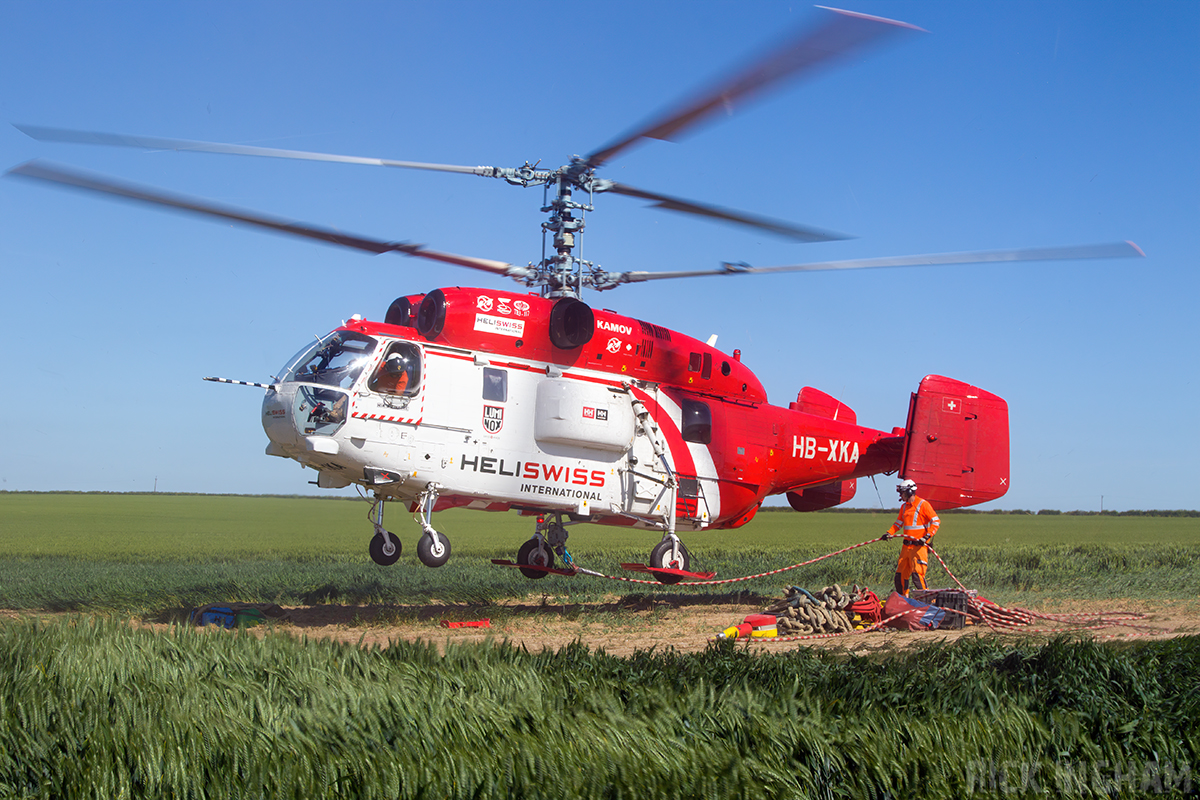 The Kamov KA-32 is the export variation of the distinctive Russian Kamov KA-27.
The unique ‘double rotor’ coaxial rotor gives the KA-32 some serious advantages to load lifting compared to a normal tail-rotor helicopter. It provides amazing stability for precision hovering and due to the lack of a tail and tail-rotor the airframe isn’t susceptible to ‘Weather vaning’ in crosswinds which could potentially be fatal when lifting a very long, heavy load on an extended strop swaying in the wind.
Another advantage to not having a tail is the ability to land on tighter spaces and not having to worry about tail-rotor clearances behind the aircraft.
And with a maximum load of 6 tons that can be lifted with the benefit of an electronic weighing system giving accurate data from the load hook, the KA-32 is the ultimate heavy lift helicopter! 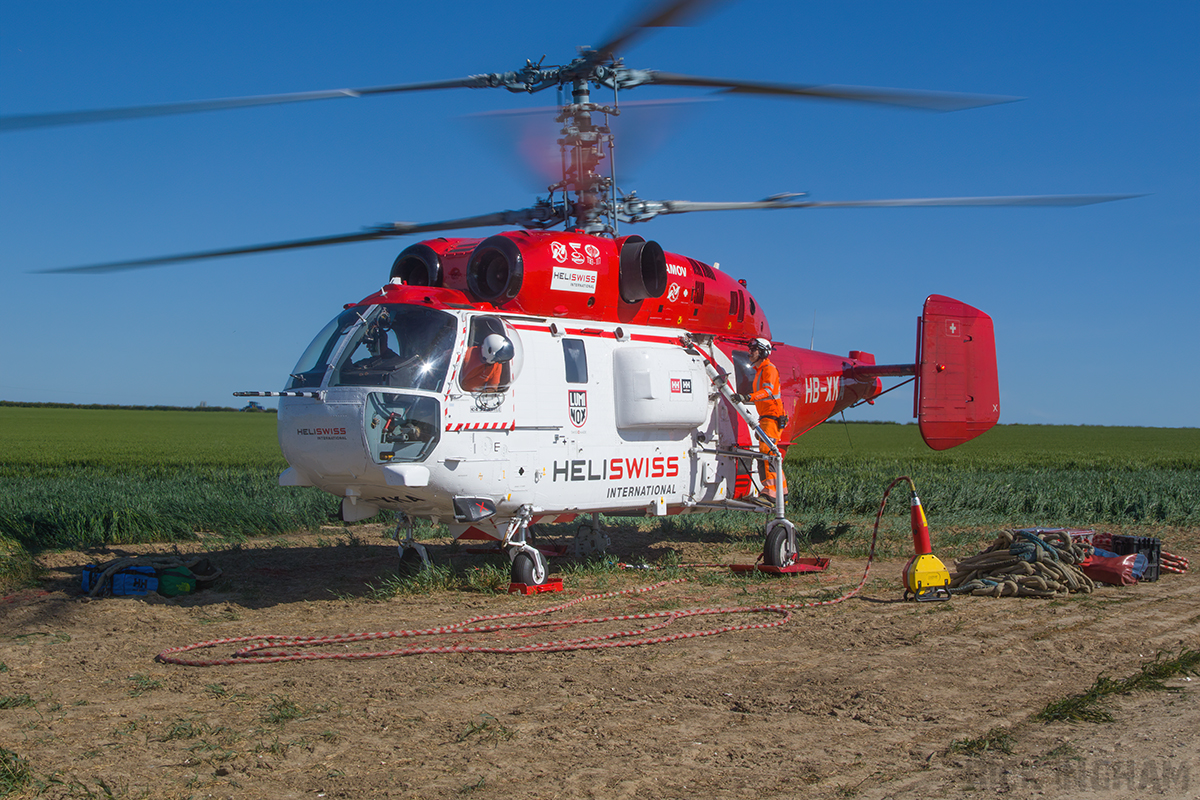 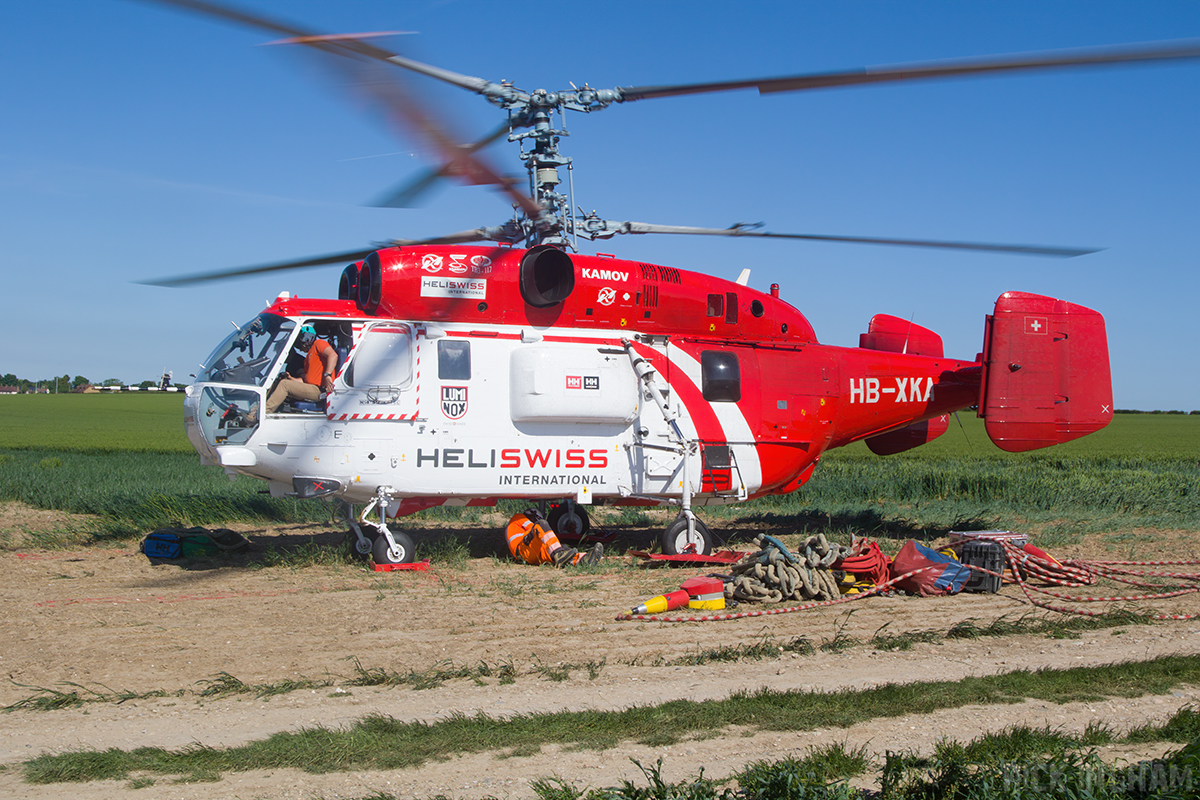