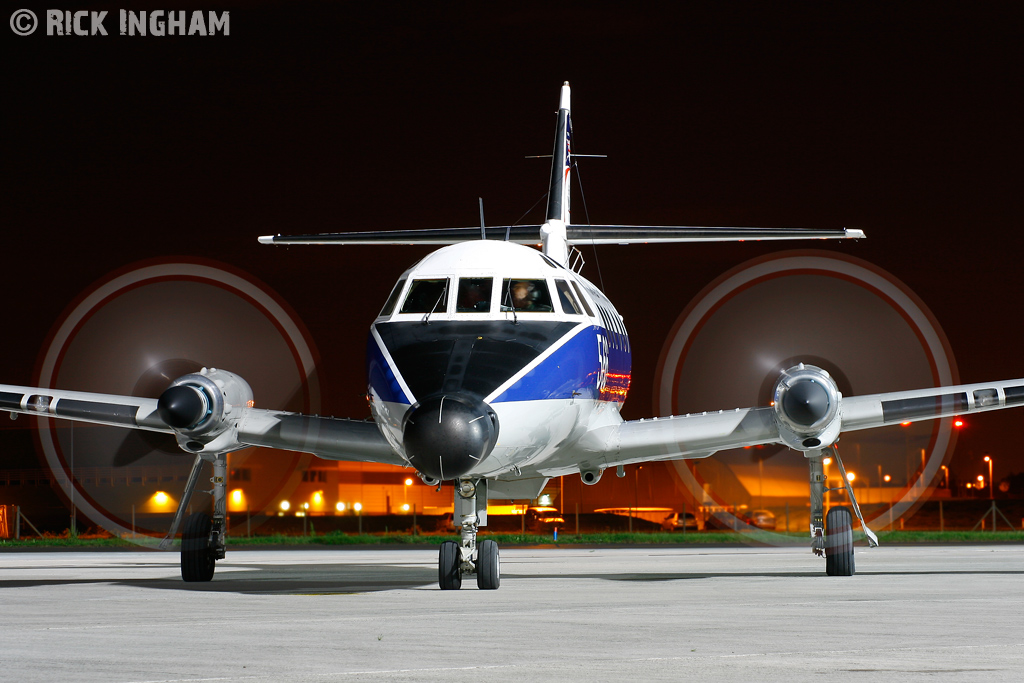 The 11th March 2011 saw the Royal Navy retire the Jetstream T.2 from service. An aircraft that well and truly earnt it's retirement with 38 years service under it's belt. Rick Ingham Photography sent two days at RNAS Culdrose to say goodbye. 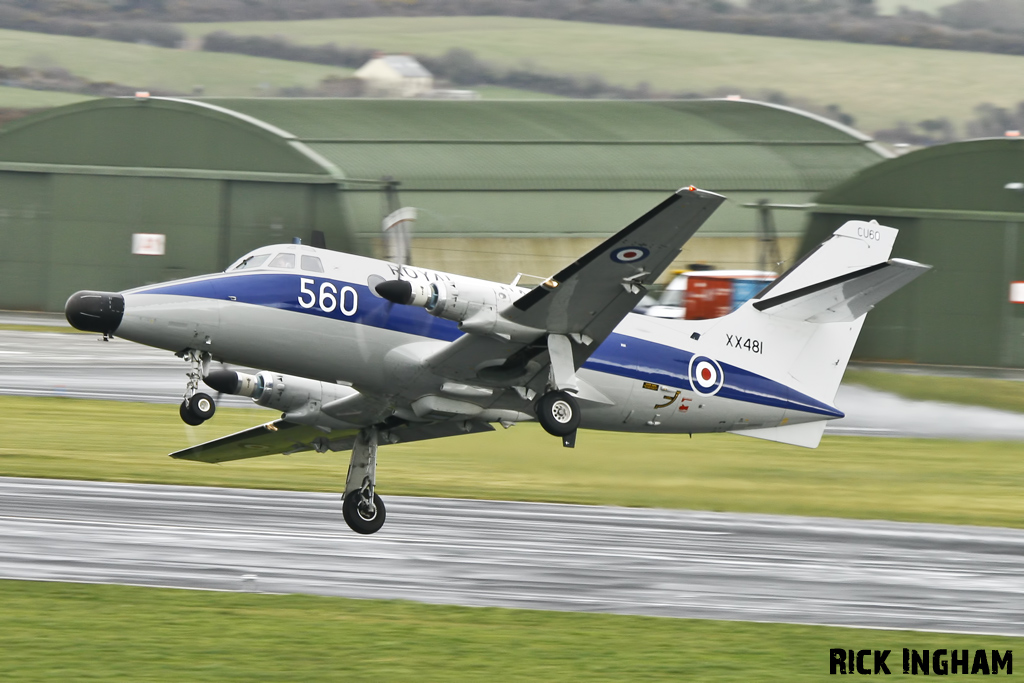 The Jetstream's story begins back in the 1960's when Hawker Siddeley and British Aircraft Corperation were the big players of the industry producing the best aircraft of the time. A company called Handley Page, most known for it's early bombers didn't have the budget to compete with the other companies producing airliners and when they found a gap in the market for a small regional airliner the Jetstream was born...

Airlines in America registered their interest straight away with 20 aircraft being purchased before the final design was even finalised. The US Airforce ordered 11 when an American engine was fitted but due the project being late the order was withdrawn.

After many prototypes, the first production Jetstream 1 flew on 6th December 1968. Over the year 38 aircraft were delivered. 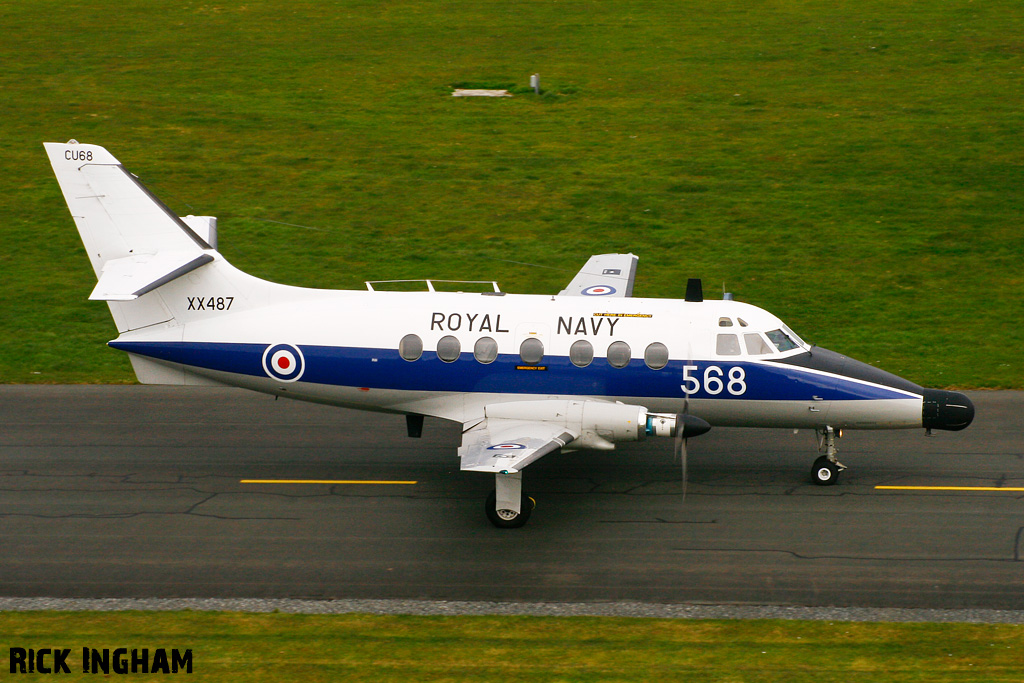 Very soon after the production Jestream 1's started rolling off the production line, Handley Page gave up on the original engine and went for a more powerful 965hp Astazou XVI engine. The aircraft fitted with this were designated Jetstream 2.
The late deliveries and engine problems eventually lead HP to go bankrupt after only 3 Jetstream 2's being produced.
Despite Handley Page folding up, there was still a big interest in the aircraft which lead to the design being picked up by a company called Scottish Aviation. They produced a further 10 Jetstream 1's and continued the production of the Jetstream 2 aircraft. In February 1972 26 Jetstream 2's were ordered by the Royal Air Force to use as multi-engine trainers. These would be designated Jetstream T.1. 14 of these were eventually modified for the Royal Navy to use for observer training and were designated Jetstream T.2. 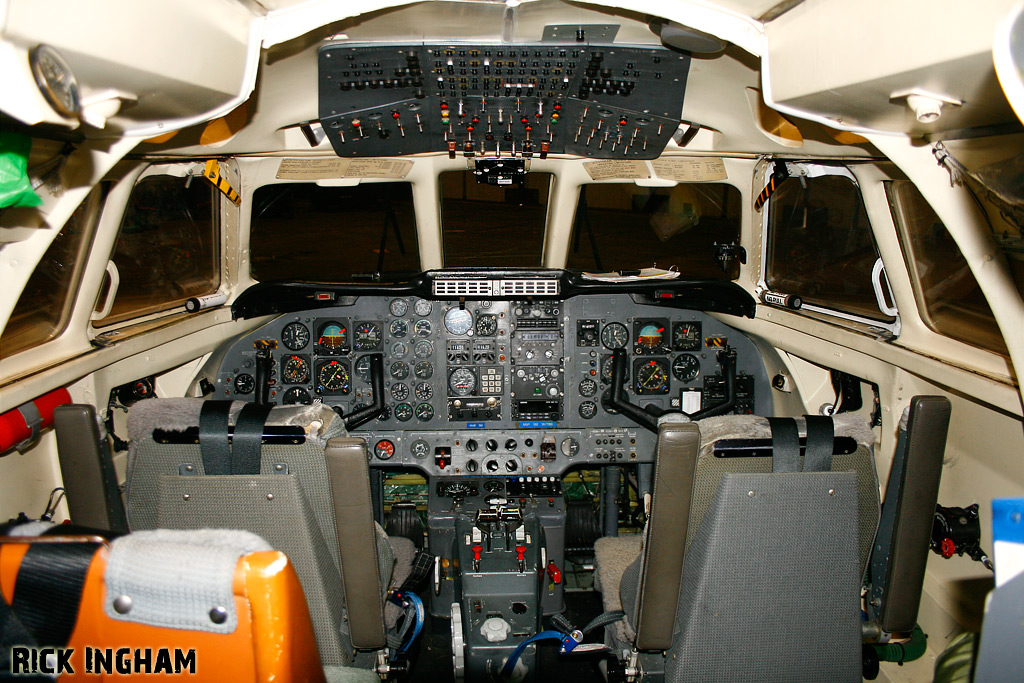 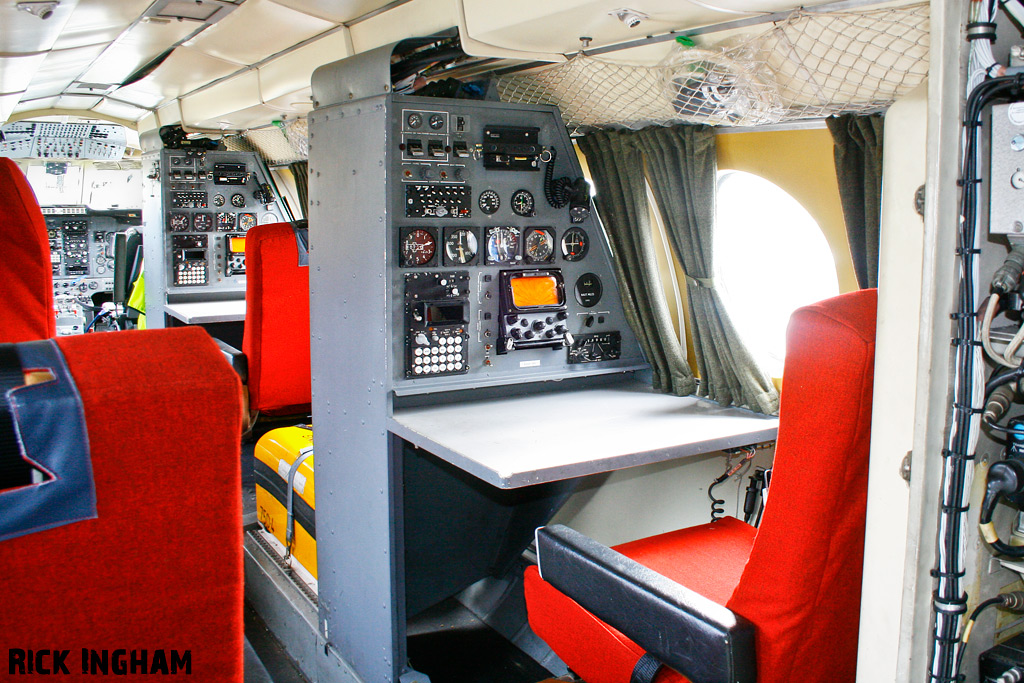 The Royal Navy screens 600 applicants a year for both Pilot and Observer roles. 45 students are offered a place as Observer and go on to the Britannia Royal Naval College (BRNC) and flying grading after which up to 36 students a year commence Observer Training with 750NAS at Culdrose.
This was the role of the HP Jetstream, to provide the Royal Navy with a good platform to provide the observer training.
The 6 month course teaches the students the art of working within a crew, navigation, the use of detection aids, asset prioritisation, multi-tasking and emergency handling.
Successfull students are then streamed into three areas within the Fleet Air Arm: 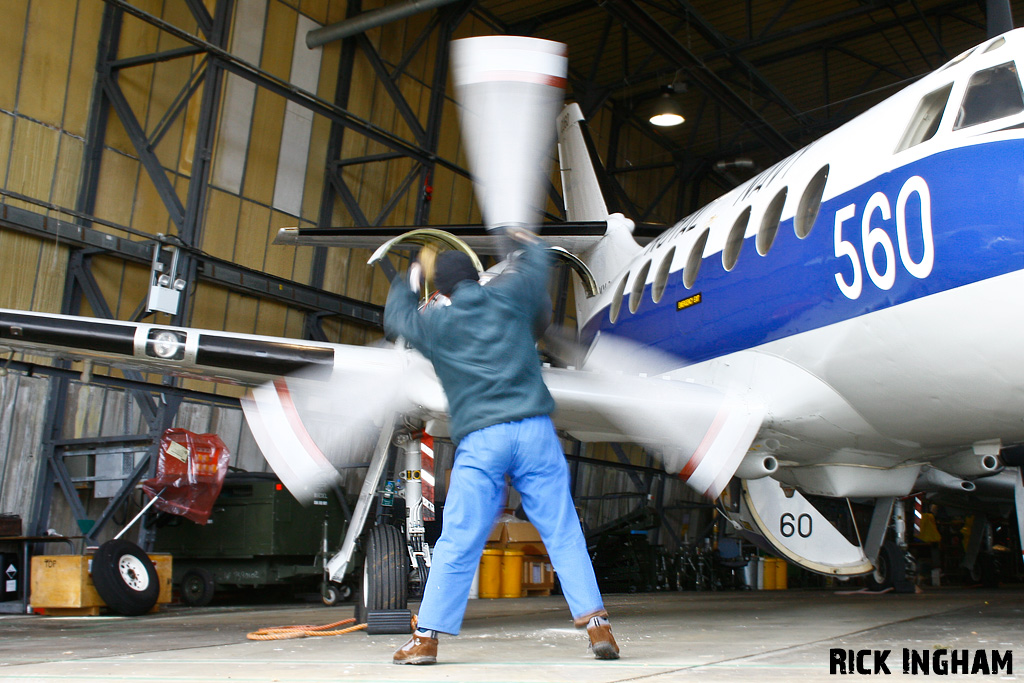 The Jetstream T.2 is powered by two Turbomeca 16D turboprop engines giving 940hp. The cockpit retains all the analogue instruments as pictured left and still has all the technology from the 1960's.
The cabin has observer stations (image 3 and 4 below) to conduct the Observer Training and even comes complete with a toilet at the rear.
One flaw of the Jetstream design was that the floor had to be lowered to give sufficient head room which resulted in the main wing spar becoming a trip hazard, as can be seen on the floor at the bottom of image 3. 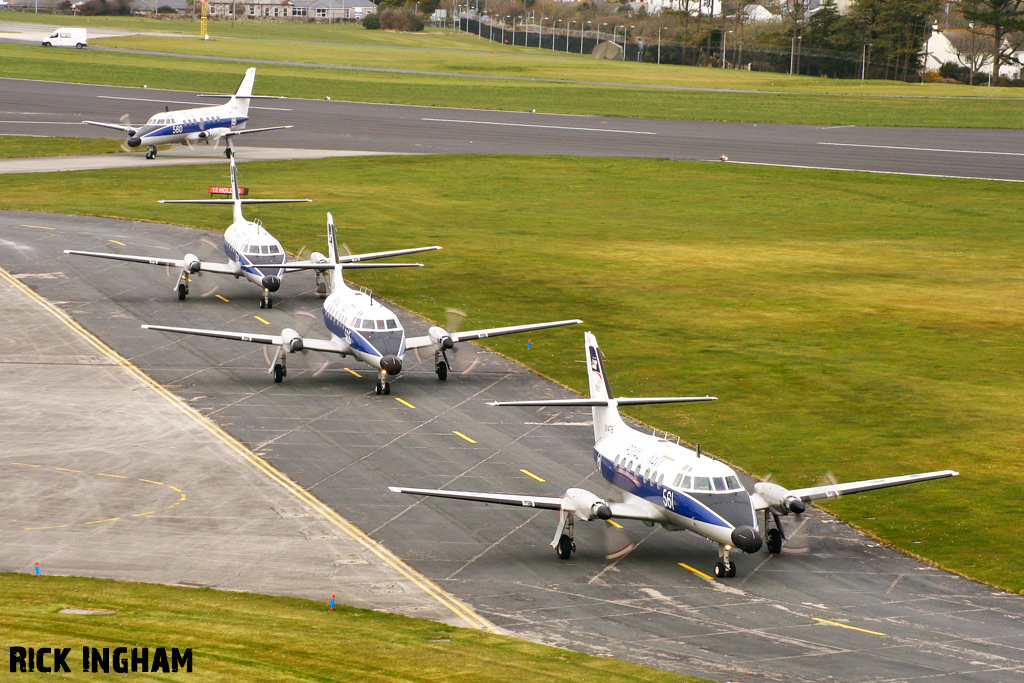 On the 7th March 2011 the final Observer Training Course finished on the Jetstream and with essential runway repairs set to close RNAS Culdrose until July 2011, it was time for the Jetstream T.2 to retire with it's head held high.
The 11th March saw a 6-ship flypast around Falmouth, Yeovilton, Britannia Royal Naval College in Dartmouth, Plymouth, Newquay, Truro, Falmouth, Lands End, Predannack and finally over the top of Culdrose. 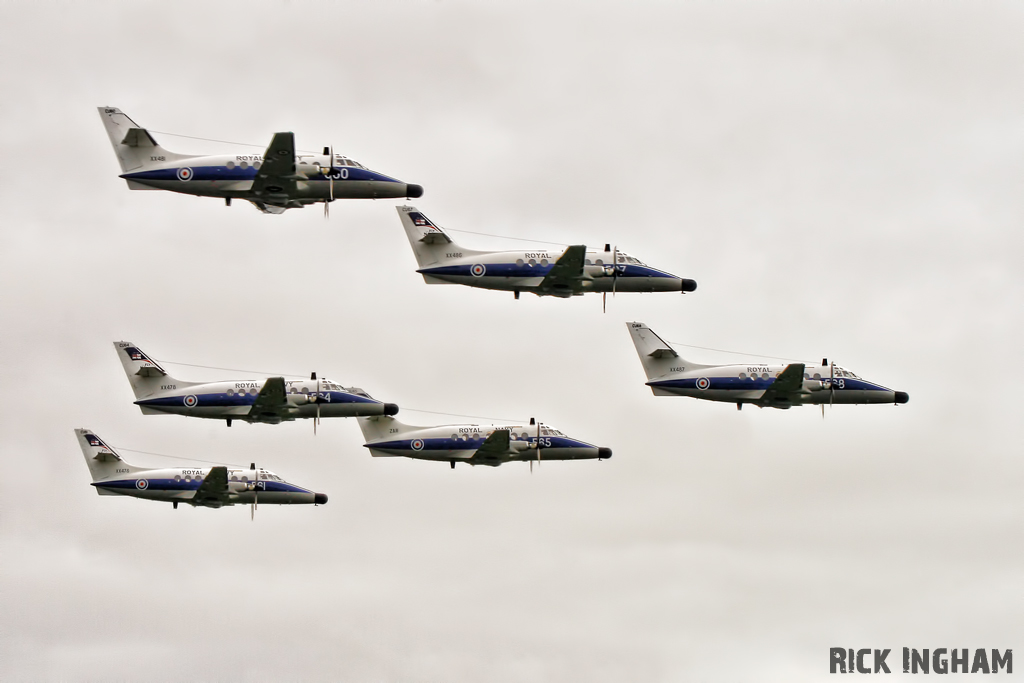 750NAS will reform back with the new Avenger, King Air 350 aircraft with reduced crew numbers and aircraft to start the Observer course again.
The Handley Page Jetstream T.2 will be missed flying it's regular clockwise loop around Devon and has served both the Royal Navy and Air Force well. 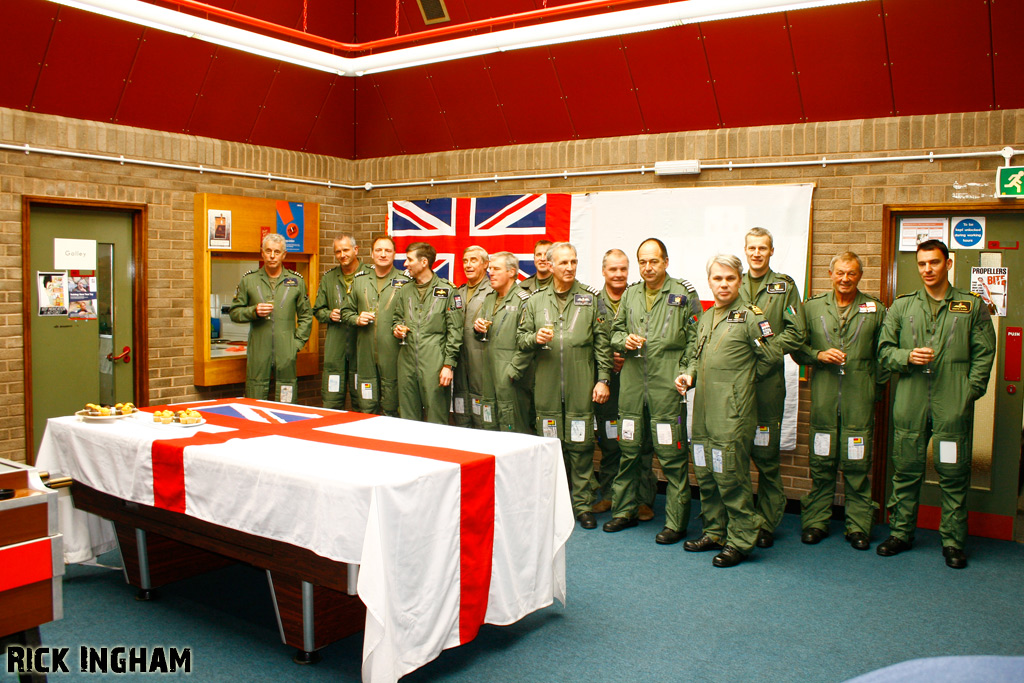 Thanks to 750NAS, RNAS Culdrose PRO and CRO for hosting the event.